The alleged culprits are both in their thirties and famous in the gaming world.
Next Article

Stay informed and join our daily newsletter now!
April 8, 2021 3 min read
This article was translated from our Spanish edition using AI technologies. Errors may exist due to this process.
Opinions expressed by Entrepreneur contributors are their own.

While the vast majority of Mexicans wait their turn to receive the Covid-19 vaccine,  two young people decided to go disguised as grandparents to get ahead. However, their "suspicious attitude" gave them away and it was discovered that they are actually a pair of famous gamers in their thirties.

One of them is Rubén Morales Zerecero, 31, who was world runner-up in the official video game of the International Federation of Football Association (FIFA). The other is Christian Alberto Nieva Gómez, 35, who has a position as an advisor in the company EA Sports Latin America.

THE FALSE OLD PEOPLE WHO WERE GOING FOR THEIR VACCINE Vs. # COVID19
So they came to try to scam the agents of @ssc_cdmx and @SEMAR_mx
They wore these costumes, and these fake birth certificates to ensure that they were 62 and 64 years old.
They ended up discovered, detained ... and without a vaccine. pic.twitter.com/kNYIwH5PcV

Morales Zerecero, was one of the first professional players in the FIFA video game and even represented Mexico in the FIFA Interactive World Cup 2009. Better known as Rubén Zerecero, he has also served as an actor, following in the footsteps of his mother, the comedian Aida Pierce , with small roles in commercials, soap operas and theater. He also gained popularity as part of the 'Fifasticos' program on YouTube.

For her part, Nieva Gómez is the campaign manager for Latin America for the FIFA brand at EA Sports, a company that designs and distributes the video game worldwide. In his years as part of the company's marketing team, he has collaborated to make the game more realistic and regionalize it for Mexico and Latin America. 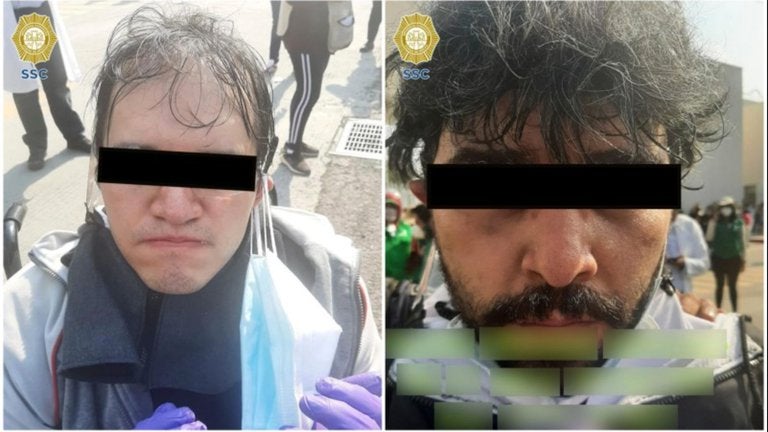 Both were arrested and linked to proceedings for their probable participation in the crimes of identity theft and falsification or alteration and improper use of documents. They had presented false birth certificates to ensure that they were 62 and 64 years old. Those now accused must remain in preventive detention while the investigation concludes, reported the Attorney General's Office (FGJ) of Mexico City.

So far, the company EA Sports has not commented on the case.

On March 27, the two gamers came characterized as older adults to the vaccination center of the CENCIS de la Marina, in the Coyoacán mayor's office, confirmed capital authorities. With comfortable clothes, false gray hair, face masks, mask, latex gloves and apocryphal documents, they managed to bypass the filters and sneak in. One of them even asked for a wheelchair, pretending not to be able to walk.

However, someone "realized from the voice that it did not coincide, that's when the authorities were called," said Cristina Cruz, state delegate for Development Programs in CDMX.

Now, both are in prison, awaiting the conclusion of the investigations into their alleged responsibility in the crimes of identity theft and falsification or alteration and misuse of documents.

Chrissy Teigen Is Back on Twitter: 'It Feels Terrible to Silence Yourself'

Dogecoin Is Scaring Investors. Here's Why.

Jeff Bezos Says Amazon Has to Treat Its Employees Better