It Costs $3 Million to Travel on This Nuclear Yacht Packed With Millionaires, Scientists and Celebrities

Entrepreneur Aaron Olivera aims to raise environmental awareness by bringing climate experts, activists and tycoons together on a yacht to travel the world.

By Entrepreneur en Español April 12, 2021
This article was translated from our Spanish edition using AI technologies. Errors may exist due to this process.

During a launch dinner in Singapore, entrepreneur Aaron Olivera presented his project to raise awareness about the environment . This is the Earth 300 nuclear yacht , which will offer 10-day tours in which scientists and students will rub shoulders with high-level tourists, such as millionaires and celebrities, who will pay about $ 3 million per trip .

In addition to the crew, a group of climate scientists and students will be on board, examining the ocean during the tours. All of them will be able to travel at no cost or at a reduced price. The $ 3 million fee will be charged to wealthier tourists, which will help make the business profitable.

In the presentation, Olivera explained that his intention is to save the environment, inspire young people and promote science.

“We wanted the sphere to inspire whoever looks at it to save the planet. Imagine if we could build an object that stimulates people around the world, " said the enthusiastic businessman, who referred to the ship as " the Eiffel Tower of our generation, " according to Bloomberg .

This is the Earth 300 nuclear superyacht

The superyacht has a modernist style with clean lines, designed by Ivan Salas Jefferson , a specialist in this type of ship. It is 300 meters long and 60 meters high, enough to comfortably accommodate 450 people.

The spacecraft will house 22 laboratories where some 160 scientists will work , conducting research and collecting data through thousands of built-in sensors and what could be the first commercial high seas quantum computer. 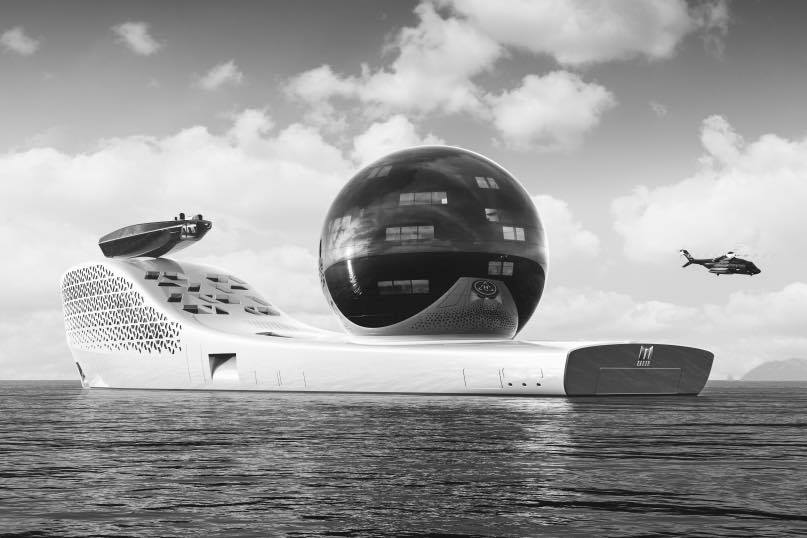 Part of its high cost will be used to install a zero-emission atomic power plant to power the yacht. The UK-based company Core Power is developing a molten salt reactor, a technology from the US nuclear company TerraPower, founded by Bill Gates.

How much will the Earth 300 superyacht cost and when will it set sail?

Although Olivera is very clear about his project, there is still a long way to go to make it come true. It has taken the entrepreneur 6 years and 5 million dollars to have a sufficiently advanced design to start listing the construction of the superyacht, which would be tentatively carried out in shipyards in Europe and South Korea.

The total cost of the Earth 300 is estimated to be between $ 500 million and $ 700 million . A part would come from private investors, but the majority would be obtained through traditional financial instruments.

The yacht is scheduled to launch in 2025 , but certification of the reactor could take between five and seven years. For this reason, the spacecraft is projected to initially run on synthetic green fuels.

The entrepreneur wants the ship's first trip to be a tour around Antarctica , followed by a trip through the Arctic . It is estimated that it will sail for 300 days a year, generating about $ 100 million from wealthy ecotourists. You will also receive additional income for renting it for events or as a set for movies.

Olivera affirms that the business plan has been tested by the financial company KPMG and that 80% of the profits will go to environmental causes. In addition, he said that the scientific project would be "open source" , with processing facilities and information shared with other climate research efforts around the world.

With information from Bloomberg .