Whitney Tilson’s email to investors discussing stock shorts collapse; excerpt from his book: ‘Getting Hooked on Short Selling’. Q1 2021 hedge fund letters, conferences and more Stock Shorts Collapse 1) Following up on what I wrote in Friday’s e-mail about the carnage among short sellers, this Bloomberg article documents the unsurprising result: Stock Shorts Collapse […]

By Jacob Wolinsky April 20, 2021
This story originally appeared on ValueWalk

1) Following up on what I wrote in Friday's e-mail about the carnage among short sellers, this Bloomberg article documents the unsurprising result: Stock Shorts Collapse as No Hedge Fund Wants 'Head Ripped Off'. Excerpt:

Wall Street bears battered by the Reddit crowd earlier this year have yet to regain their gumption, even with stocks at records and valuations near two-decade highs.

The median short interest in members of the S&P 500 sits at just 1.6% of market value, near a 17-year low, according to Goldman Sachs (NYSE:GS). In Europe, a short-covering frenzy has sent bearish bets collapsing like never before in Morgan Stanley (MS) data. 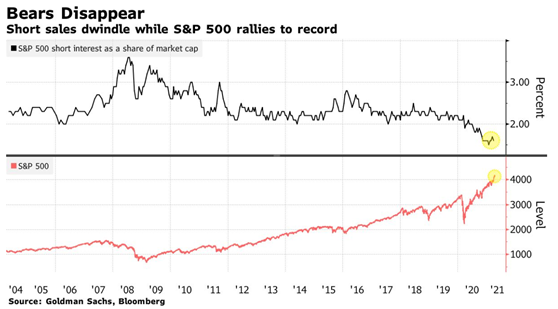 Getting Hooked on Short Selling

2) Here's an excerpt on short selling from a draft of a book I've been working on for a while, The Rise and Fall of Kase Capital, which I plan to publish next year...

Over the course of 15 years – before, during, and after my partnership with Glenn Tongue – I shorted hundreds of stocks.

It was intellectually stimulating and led to some of the biggest wins of my career – most notably in flooring firm Lumber Liquidators (LL). But overall, it was very costly.

Over my entire shorting career, I lost money – though not a ton, especially in light of the bull market. The real cost was the huge amount of time it consumed. Worse yet, it was the primary reason for my funds' terrible underperformance in 2016 and 2017 – so much so that I finally threw in the towel and closed them.

So why didn't I recognize this sooner and stop shorting entirely? Well, like most self-destructive things, it initially started off so well, which sucked me in, and I got hooked...

I was having so much fun and success, in fact, that I wouldn't even listen to Charlie Munger.

In 2002, Bill Ackman researched financial-services giant MBIA (MBI) and concluded that it was a house of cards. He shorted the stock and published an in-depth report titled "Is MBIA Triple-A?" I thought Bill's analysis was correct, so I also shorted the stock and was publicly critical of the company.

In response, the company planted a negative story in the Wall Street Journal about Bill and me, claiming that we were part of a nefarious group of market-manipulating short-sellers.

As if that wasn't bad enough, only four days later, I received subpoenas from both the U.S. Securities and Exchange Commission ("SEC") and the office of New York Attorney General Eliot Spitzer. Both regulators had obviously read the WSJ story and were following up, demanding all of my e-mails, trading records, research, etc.

I knew I hadn't done anything wrong. Nevertheless, I feared that the bad publicity and these two investigations might put me out of business.

Panicked, I called Warren Buffett for advice. He basically told me, "This too shall pass," and suggested that I speak to his long-time partner, Charlie Munger.

I had never spoken with him, so I asked, "Does he even know who I am?"

Buffett chuckled and said, "Oh, yes, he knows who you are. Give him a call."

So I did – and, to my surprise, his secretary put me right through to him. I still remember his exact words. He started by saying, "You and Bill are absolutely right on MBIA. The idea that anyone would ever think that MBIA is triple-A is so ludicrous!"

He spat out the last two words and continued:

"From a societal perspective, what you and Bill are doing [to expose MBIA] is great."

At this point, I was feeling pretty good. My hero was complimenting me!

But then, he cautioned: "But if you go through life stepping on people's air hoses, they're going to hate you and attack you. So my advice to Whitney Tilson is, don't do it."

Then, he reflected on his own experiences short-selling decades earlier. "I shorted three stocks in my life and they eventually worked out," he said, "but not before running against me and causing me total misery. So I stopped."

He concluded with a phrase I'll never forget: "But every young guy seems to have to learn this for himself..."

He was saying this to himself as much as to me, because he knew I was so full of myself that I wasn't going to listen to him. That's how wise he is... and how dumb I was. My failure to listen to Munger eventually brought me to ruin...