Breakout in the Charts for Analog Devices?

An ascending triangle pattern has emerged in the chart of Analog Devices (ADI). This is considered a bullish pattern. If the resistance level is broken, a breakout could soon occur. Read more to learn how to profit from this trade.
Next Article

This book gives you the essential guide for easy-to-follow tips and strategies to create more financial success.
Christian Tharp
April 23, 2021 3 min read
This story originally appeared on StockNews
An ascending triangle pattern has emerged in the chart of Analog Devices (ADI). This is considered a bullish pattern. If the resistance level is broken, a breakout could soon occur. Read more to learn how to profit from this trade.

An ascending triangle pattern has formed in the chart of Analog Devices, Inc. (ADI). This is a bullish pattern and if the resistance level is broken, a breakout could occur.

ADI is a leading analog, mixed signal, and digital signal processing chipmaker. The company has a significant market share lead in converter chips, which are used to translate analog signals to digital and vice versa.

The company is benefiting from strength in the electric vehicle space driven by its Battery Management System (BMS) solutions. Plus, the rising adoption of advanced radio systems in 5G is driving growth in the firm’s communication segment. Management is optimistic about growth opportunities in 5G.

ADI has a current ratio of 1.6, which means it has more than enough liquidity to handle short-term obligations. The company is also quite profitable with a net profit margin of 24%. In its most recent reported quarter, earnings were up 39.8% year over year, while revenue rose 20%.

Its stock is a bit overvalued with a trailing P/E of 41.99 and a forward P/E of 25.51. The stock has been trending up since September, but has shown mixed momentum for the year.

Take a look at the 1-year chart of ADI below with the added notations: 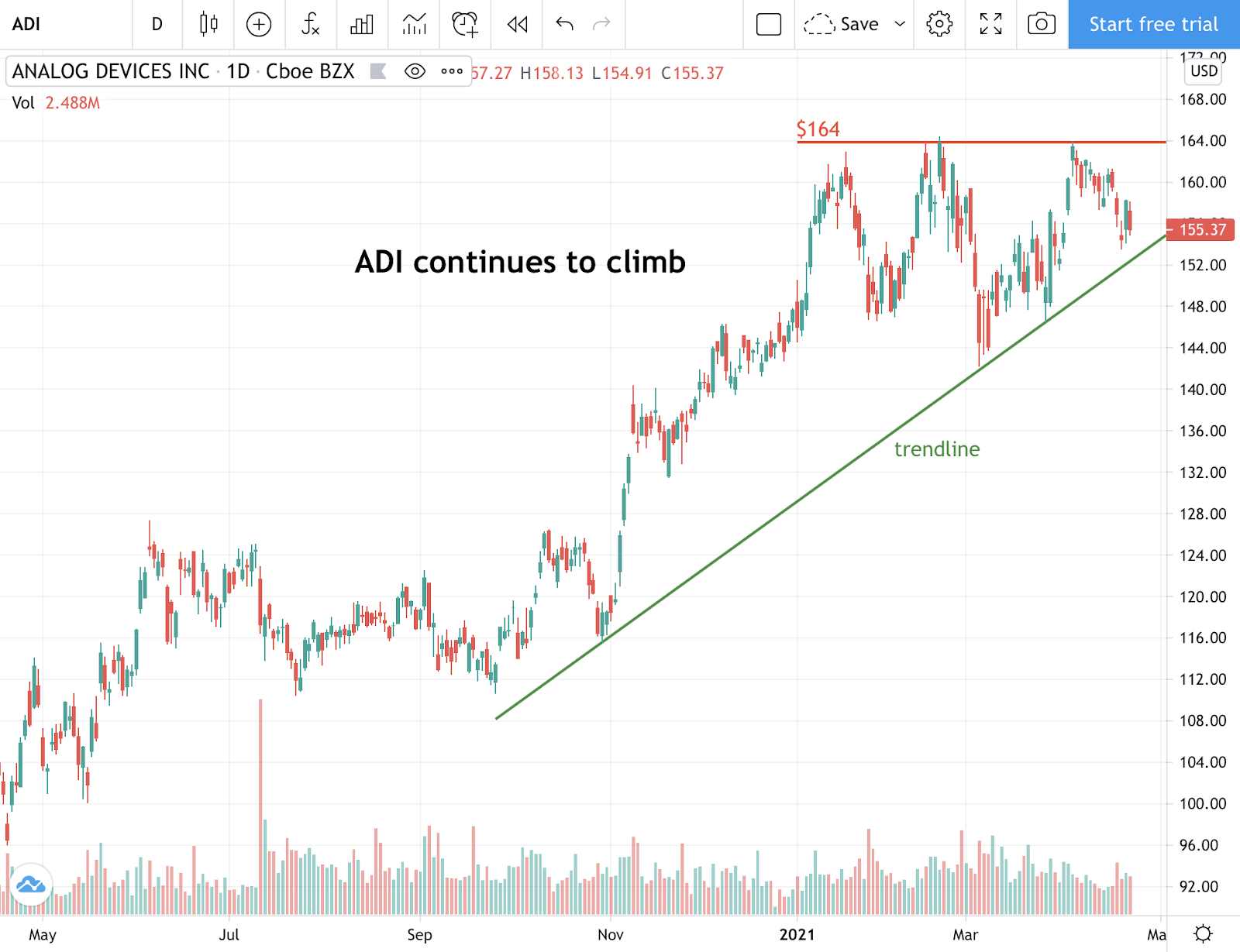 Chart of ADI provided by TradingView

While climbing a clear trendline of support (green), ADI has also formed an important level of resistance at $164 (red), creating an ascending triangle pattern. The stock just hit the resistance a few weeks ago but could now be making another run at that level.

A long trade could be entered on a break above $164 with a protective stop placed under the point of entry.

The post Breakout in the Charts for Analog Devices? appeared first on StockNews.com
More from Entrepreneur

Hot Stocks To Buy This Week? 4 Tech Stocks To Watch

Vipshop vs. Coupang: Which Asian E-commerce Stock is a Better Buy?

Why XLE Has Room to Run Higher

Top Consumer Staples Stocks To Watch In May 2021