Why XLE Has Room to Run Higher

As the economy continues to open up, there is more and more demand for energy, which is great news for investors in the Energy Select SPDR ETF (XLE). Read more to learn why the ETF has a lot more to run in the upcoming months.
Next Article

This book gives you the essential guide for easy-to-follow tips and strategies to create more financial success.
Andrew Hecht
May 17, 2021 8 min read
This story originally appeared on StockNews
As the economy continues to open up, there is more and more demand for energy, which is great news for investors in the Energy Select SPDR ETF (XLE). Read more to learn why the ETF has a lot more to run in the upcoming months.

Prices are rising as raw material inputs are moving to multi-year or all-time highs. After making significant price bottoms in March and April 2020 during the height of “risk-off” selling during the global pandemic’s spread, prices have taken off on the upside.

In April 2020, nearby NYMEX crude oil futures fell to a record low at negative $40.32 per barrel. NYMEX crude oil’s delivery point is a pipeline in Cushing, Oklahoma, making it landlocked petroleum. As storage facilities reached capacity, there was nowhere to store the energy commodity. Those holding long positions as the nearby futures contract entered the delivery period had to sell at any price as WTI crude oil became a bearish hot potato.

Brent crude oil futures fell to a century low at $16 in April 2020. Brent is a seaborne crude oil. The potential to store oil in tankers prevented it from falling below zero.

As crude oil tanked last April, shares of the leading US traditional oil and gas companies plunged. The Energy Select SPDR Fund (XLE) holds a portfolio of the top US oil companies’ shares. The XLE has made a substantial comeback since the 2020 lows, but it has room on the upside as the energy commodity is trending higher and more gains are on the horizon. Higher crude oil prices translate to rising profits for companies in the XLE.

It is no secret that the energy demand picture in 2021 is a complete about-face from this time in 2020. Vaccines creating herd immunity to COVID-19 are sending people back to the workplace, allowing for more unrestrained movement. They are increasing the number of people taking long-overdue vacations over the coming weeks and months.

Moreover, the sharp rise in commodity prices from metals to agricultural products increases production, lifting energy requirements for mining, smelting, refining, and farming worldwide. The bottom line is that energy demand is not only robust; it is booming.

Meanwhile, US energy policy under the Biden administration is shifting to a greener path. According to Baker Hughes, the number of operating oil and gas rigs on May 14 was 352 and 100, respectively. Since last year at the same time, there are 94 more oil and 21 more natural gas rigs extracting the energy commodities from the earth’s crust in the US.

Meanwhile, according to the Energy Information Administration, US crude oil production stood at 11 million barrels per day as of May 7, down 7.6% from May 1, 2020, and natural gas inventories were 15.7% lower than last year. The tightening regulatory environment under the Biden administration is likely weighing on oil and gas output as demand is rising.

OPEC+’s pricing power is rising after years of suffering under US shale production. The cartel’s mission is to manage production policy to achieve the highest possible price for its members.

While the shift to green energy production and consumption will take years, the US and other consumers worldwide continue to depend on fossil fuels for power. US energy policy could wind up costing consumers a lot as energy prices rise.

The XLE is a diversified traditional multinational energy ETF product

XLE is the leading diversified ETF holding a portfolio of multinational US oil and gas-related companies. XLE’s top holdings and fund summary include:

The holdings include an over 44% exposure to Exxon Mobile (XOM) and Chevron (CVX), the two top US integrated oil and gas companies. XLE also holds oil services and refining companies in its portfolio. At $53.49 per share at the end of last week, the XLE had approximately $23.84 billion in assets under management. The ETF trades an average of over 29.8 million shares each day and charges a 0.12% management fee.

Rising oil and gas prices pushed earnings higher for the companies in the XLE’s portfolio.

During the second week of May 2020, nearby NYMEX crude oil was below the $30 per barrel level. The price was over double that level at the end of last week, with nearby June futures settling at $65.37 per barrel. 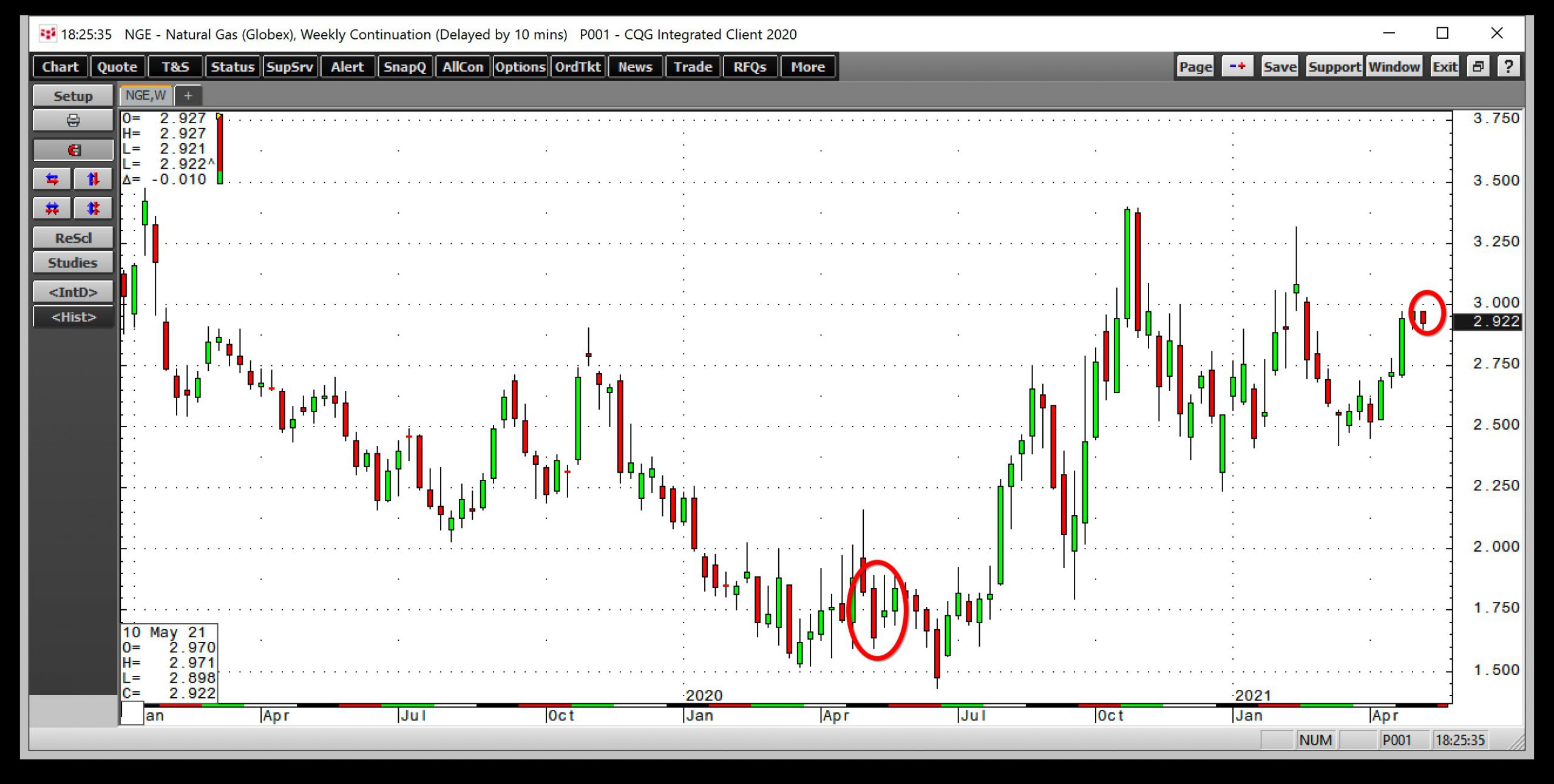 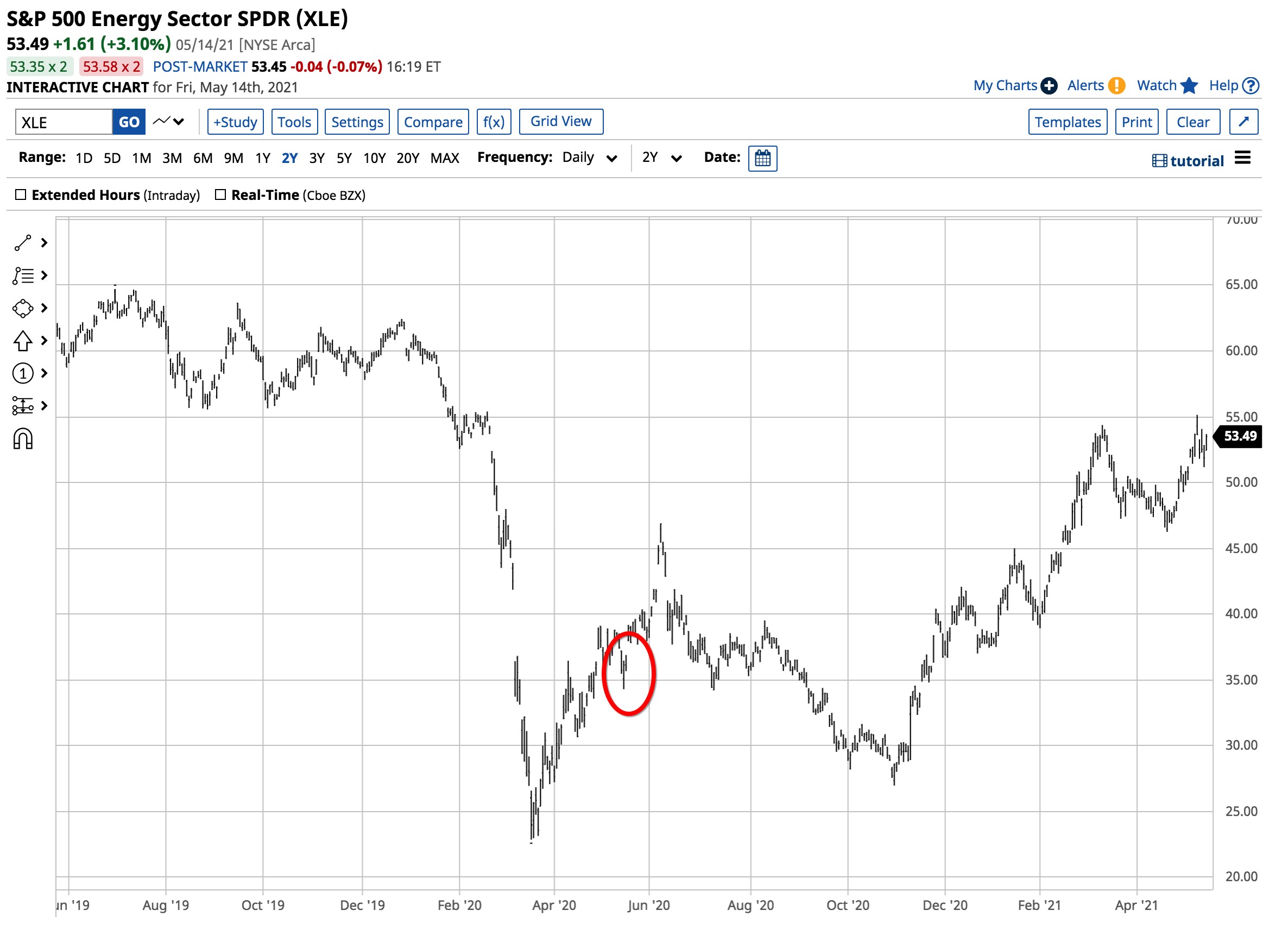 A significant comeback, but lots of room on the upside

The XLE maybe 48.5% higher than last year at this time, but the long-term chart shows that it could have room to run over the coming months. 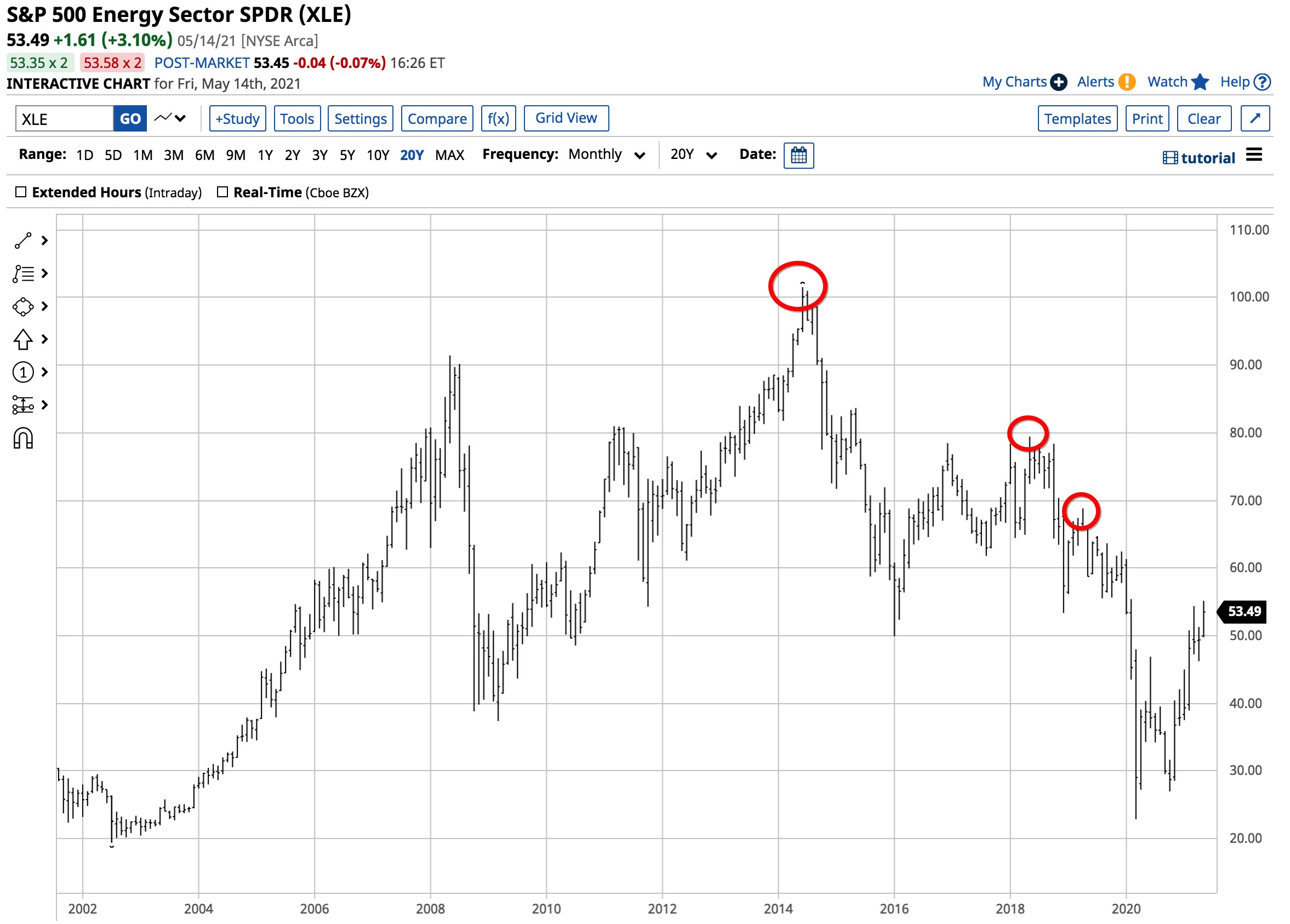 The trend is always your best friend in markets. In the XLE, it remains higher as of May 14, 2021.

XLE pays while you wait for capital appreciation

The leading US multinational traditional energy companies continue to pay above-market dividends to their shareholders. As of April 30, the average dividend yield on the S&P 500 was at the 1.38% level. The DJIA average was at the 1.60% level, and the NASDAQ 100 yield was at 1.19%.

Three reasons crude oil could head for $100- Bullish for XLE

Crude oil is trending higher, and the prospects for a continuation of the rally are increasing. Three factors support higher crude oil prices in the current environment:

The chart of nearby ethanol futures shows that at the most recent $2.44 per gallon high this month, biofuel prices have increased to the highest level since April and May 2014. During those months, nearby NYMEX and Brent crude oil futures were over the $100 per barrel level.

Goldman Sachs’ analysts have already forecast an $80 per barrel crude oil price by the third quarter of this year. Bull markets often take prices far higher than analysts believe possible. The last time crude oil was over $100, and gasoline prices were north of $3 per gallon was in June 2014. The XLE was trading at the $100 level during that month. The prospects for rising oil and gas prices make the XLE at $53.49 per share look inexpensive despite the 48% gain since last year at this time.

Commodity prices are trending high, and the XLE has lots of side room at its current price level.

The post Why XLE Has Room to Run Higher appeared first on StockNews.com
More from Entrepreneur

How to Manage Risk and Make Money in This Volatile Market

Best Inflation Stocks To Buy This Week? 4 To Watch