British-Palestinian filmmaker and human rights advocate Farah Nabulsi will share her insights on the key to making successful career pivots.

Farah Nabulsi's directorial debut short film The Present, which underscores the importance of freedom of movement as a basic human right for Palestinians, received an Oscar nomination for Best Live Action Short Film and won a BAFTA award for Best British Short Film.

Interestingly, Nabulsi started working in the film industry only in 2015. Therefore, her achievements this year make her well positioned to advise on the right way to make career pivots that work for you in the newest edition of Against All Odds, the Entrepreneur Middle East Live webinar series hosted by Managing Editor Tamara Pupic.

The webinar will be held at 1pm (UAE) on Thursday, May 27, 2021. To register and reserve your spot, please click here. 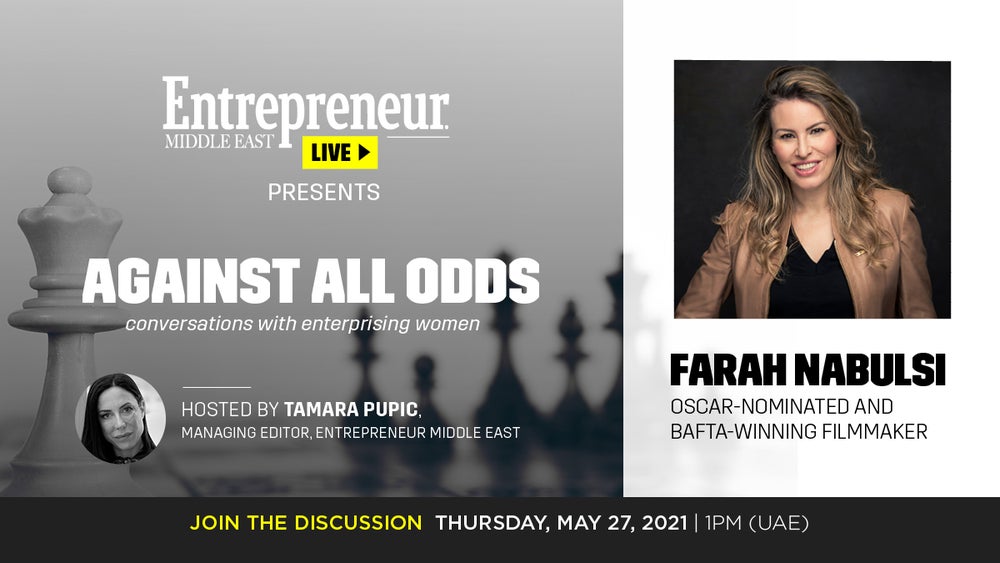 The daughter of Palestinians who made a home in the UK in the 1970s, Nabulsi began her career as an institutional equity stockbroker, earning a CFA designation at JP Morgan Chase. She then moved on to build a children-focused business that she ran for a decade.

Today, Nabulsi is fully focused on her production company Native Liberty through which she writes, produces, and directs fiction films that explore topics that matter to her, as well as on Oceans Of Injustice, a digital resource that she created to deconstruct the Israeli military occupation of Palestine in a manner never done before.

As someone who taught herself how to direct by reading film books and watching YouTube masterclasses with famous directors, Nabulsi's artistic advocacy today is endorsed by Noam Chomsky, Hanan Ashrawi, John Pilger, Ken Loach and others. Her film, The Present, received over 30 Audience and Jury Awards at top tier international film festivals, and was licensed internationally including to Canal+ and Netflix Worldwide.

To register and reserve your spot for this Against All Odds webinar on Thursday, May 27, 2021 at 1pm (UAE time), please click here.