The optimistic statements from the CEO of Tesla caused a rise in the price of Bitcoin, confirming the influence of Elon Musk in the world of cryptocurrencies.

By Entrepreneur en Español June 14, 2021
This article was translated from our Spanish edition using AI technologies. Errors may exist due to this process.

Once again, Elon Musk proved that his word weighs heavily in the crypto arena. This time, the tycoon declared that his company Tesla sold about 10% of the Bitcoins he owned and that he will accept them again as a form of payment when there is a more ecological way to mine them, which caused an immediate increase in their price.

Related: It Is a Bad Idea for El Salvador to Accept Bitcoin as Legal Currency, IMF Alerts

It all started when Musk replied to a tweet where he was accused of manipulating the price of Bitcoin.

"This is inaccurate. Tesla only sold about 10% of the holdings to confirm that BTC could be easily liquidated without moving the market," wrote the CEO of Tesla on Twitter at 12:42 p.m. on Sunday (GMT-5, Central Mexico time).

"When there is confirmation of reasonable clean energy use (~ 50%) by miners with positive future trends, Tesla will once again allow Bitcoin transactions," he added.

This is inaccurate. Tesla only sold ~ 10% of holdings to confirm BTC could be liquidated easily without moving market.

In a matter of minutes, following the billionaire's statements, Bitcoin entered a bullish streak that culminated this Monday at 9:29 a.m. (GMT-5) when the cryptocurrency reached $40,971 per unit, according to data from CoinMarketCap. 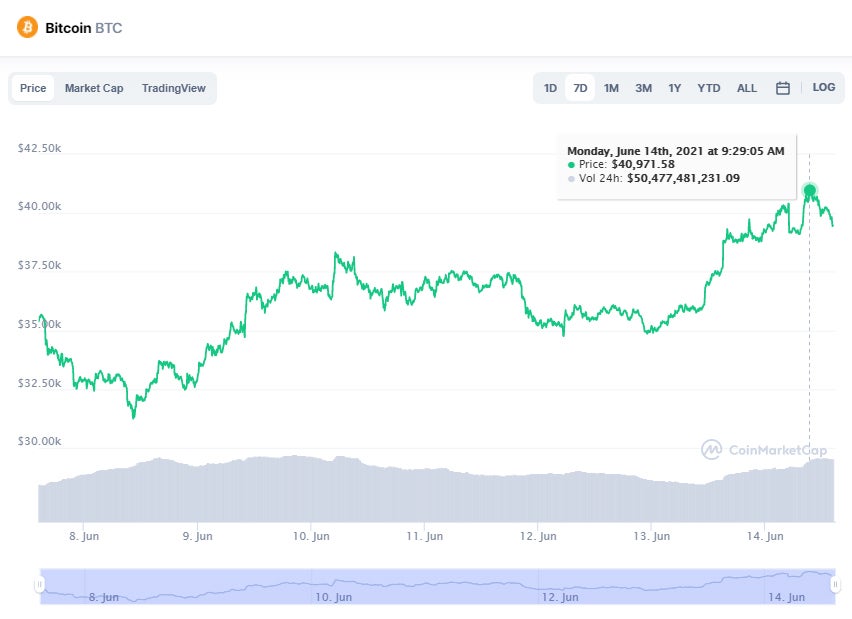 In February 2021, Elon Musk confirmed that Tesla, his electric vehicle company, bought $1.5 billion worth of Bitcoin. This made it the second largest BTC holder in the world, only behind MicroStrategy, a company that offers data software.

Related: Does Elon Musk Have a New Enemy? Binance CEO Taunts Him Over Tesla Bitcoins

Soon after, Musk announced on Twitter that Tesla would accept Bitcoin as a form of payment, but in May he backed off, citing environmental concerns over the large amount of power required to mine Bitcoin. Despite underlining that Tesla would not sell its tokens, the statement caused the price of the cryptocurrency to drop more than 10%.

However, a few weeks later, the businessman launched another tweet showing his optimism about Bitcoin, boosting it again.

"I spoke with the North American Bitcoin miners. They pledged to make public the current and planned use of renewable energy and to ask miners around the world to do so. Potentially promising," Elon Musk tweeted.

Now we just have to wait for the next movements of Elon Musk and see how he continues to move millions of dollars with just a few words on Twitter.

Related: A Tweet From Elon Musk Collapsed Bitcoin and This New Tweet Lifted It in Minutes, Can We Now Talk About the 'Musk Effect'?

Bitcoin as Currency Triggers Our Fear of Missing Out. Can It Be Fixed?