Bitcoin's slump continues now that the Chinese government has shut down cryptocurrency mining facilities, wiping out about 90% of mining capacity in the country.
Next Article

Entrepreneur en Español
Entrepreneur Staff
June 21, 2021 2 min read
This article was translated from our Spanish edition using AI technologies. Errors may exist due to this process.

Last week, it was announced that the Chinese government would implement a ban against cryptocurrency mining, which was extended this weekend. The Chinese authorities ordered the closure of the facilities where this activity is carried out, which resulted in a strong fall of more than 11% in Bitcoin (BTC).

This Monday morning, June 21, Bitcoin reached a minimum price of $31,830 per unit, according to data from CoinMarketCap. Just a few hours earlier, during Sunday afternoon, the cryptocurrency was trading at $35,945, which means a drop of 11.45%.

Last week, Elon Musk said that his company Tesla would accept Bitcoin again when cryptocurrency "miners" used more clean energy. The announcement triggered a rebound in the price of BTC, which even surpassed $40,000. However, it did not stay there long and is getting further away from its all-time high of more than $64,000 on April 14. 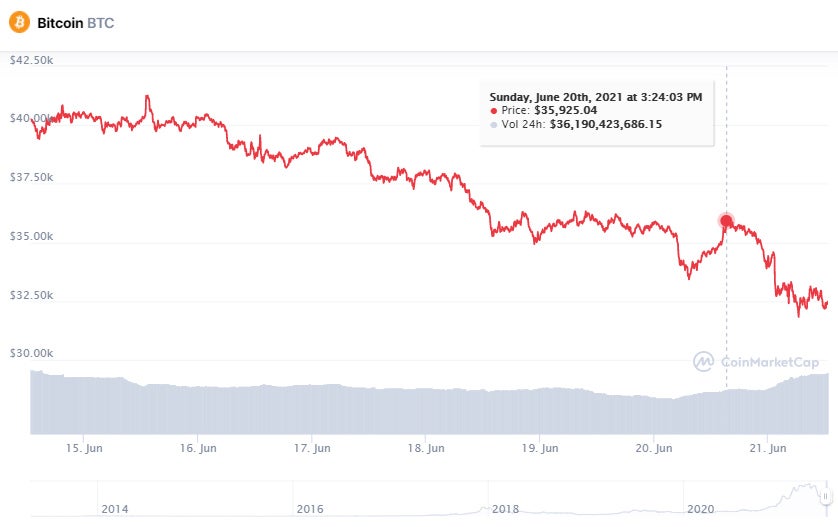 Regional governments in Chinese provinces have ordered the closure of cryptomining facilities and ordered power companies to stop supplying power to all mines before Sunday.

Local media reported that electricity supplies to all cryptocurrency mines in Sichuan province were cut off at midnight Sunday.

Related: How to Mine Bitcoins?

Cryptomining in China fuels nearly 80% of the world's cryptocurrency trade. With this ban, the government ends about 90% of the Bitcoin mining capacity in the country.

The Chinese government's restrictions against cryptocurrencies began last May when it prohibited all financial entities in the country from carrying out transactions with digital currencies.

Analysts point out that all these measures are likely related to China's intention of launching its own official cryptocurrency, with which it can control transactions and prevent capital flight, investment and tax collection.

Related: They Present the First Cryptocurrency Linked to the Mexican Peso

It is a bad idea for El Salvador to accept Bitcoin as legal currency, IMF warns