Jeff Bezos' company and Apple top the list of brands in the Kantar BrandZ ranking.
Next Article

Entrepreneur en Español
Entrepreneur Staff
June 22, 2021 3 min read
This article was translated from our Spanish edition using AI technologies. Errors may exist due to this process.

Amazon maintains first place in Kantar BrandZ's “World's Most Valuable Brands 2021” ranking. This year, Chinese firms such as Tencent and Alibaba continue to climb places and position themselves within the top 10.

The ecommerce company, founded by Jeff Bezos , has grown 64% and is valued at $ 684 billion, catapulting it into the top spot.

The company led by Sundar Pichai managed to overtake Microsoft, which is in fourth place with 410.271 million dollars. Finally, the top 5 is closed by Tencent , a Chinese video game and social media company, which reached a value of 240.931 million dollars and rose two positions from last year.

The other five brands in the top 10 are: Facebook, Alibaba, Visa, McDonald's, and Mastercard, respectively. 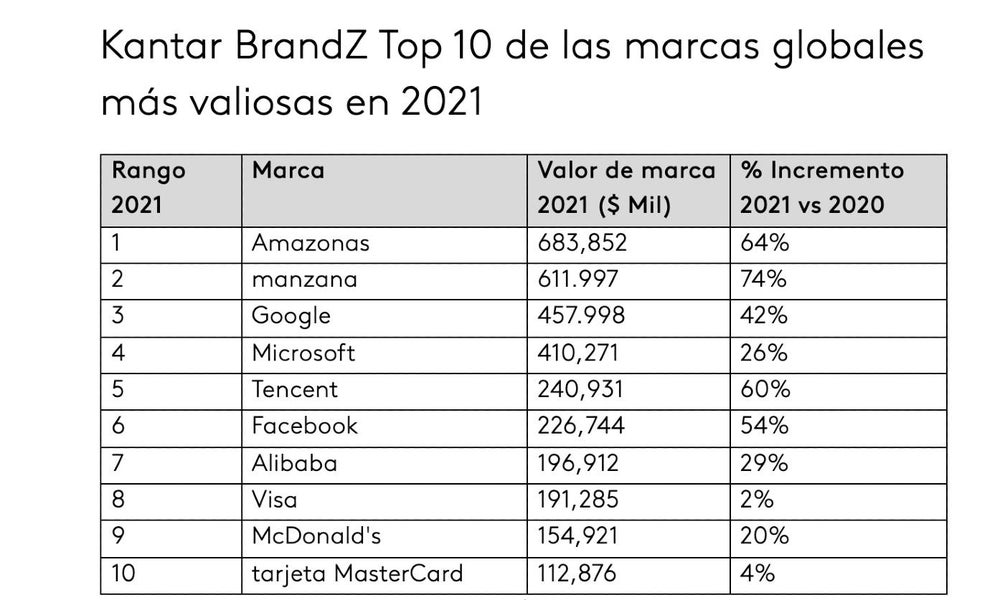 Chinese brands on the rise

Some companies from the eastern country have doubled their value, among them are:

These are accompanied by an American company that is ranked number 47, and which turns out to be nothing more and nothing less than Tesla . Elon Musk's company has doubled in value, is the fastest growing brand and has become the most valuable auto firm increasing its value by 275% to $ 43 billion.

The world's most valuable companies have achieved a total value of $ 7.1 trillion, which is equivalent to the GDP of France and Germany together.

Burger King Tweets "Women Belong in the Kitchen," And Social Media Is on Fire