The Rise of the Alt-Doge

InvestorPlace - Stock Market News, Stock Advice & Trading Tips If you're looking for the next Dogecoin, you're not alone. Today, we take a deep di...

By Thomas Yeung June 10, 2021
This story originally appeared on InvestorPlace

Let’s do a walk down memory lane.

Last weekend, my greyhound and I visited our local dog park. We wandered straight into a Shiba Inu meetup.

“Hey, Daaaaaadd… Get me out of here.” 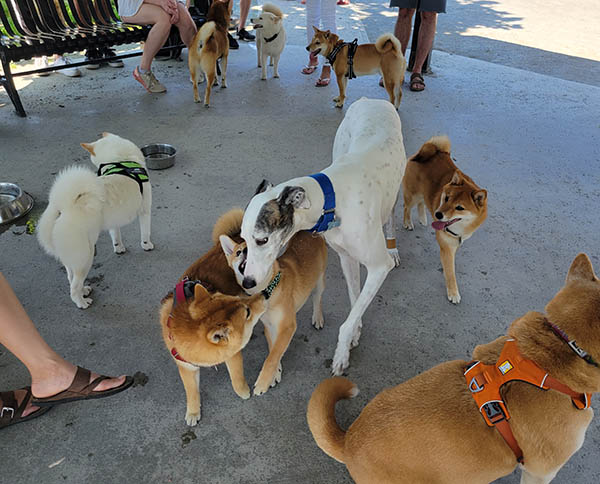 If you’re feeling that way about Dogecoin (CCC:DOGE-USD), I don’t blame you either. In our highly non-scientific InvestorPlace.com poll, 51% of respondents now see Dogecoin as old news (boomer coin, perhaps?)

In its place, you have alternatives like Shiba Inu, Snoop Doge, and of course, Australian Safe Shepherd, AKA “ASS Coin.”

Many of these tokens get bought for the same reason stocks like Clover Health (NASDAQ:CLOV) did yesterday. They’re cheap. Some can mint quadrillions of tokens just to guarantee a low price-per-coin.

And some of these coins do end up succeeding. So, whether you’re bored of crypto-everything too, these are the new Moonshot investments of today.

Ctrl-Alt-Doge: Finding the Next Dogecoin

Last week, I noted that cryptocurrencies look much like rail networks. The most extensive, like Binance (CCC:BNB-USD), are exchanges (railway stations), protocols (railway tracks) and tokens (train cars) all rolled into one. That’s how $1,000 invested in BNB back in 2017 would have grown to $3.7 million today.

Meanwhile, Doge’s altcoin pretenders are primarily tokens. (Consider them the caboose of the investment world). These tokens run on existing networks, like Binance, and serve exclusively to shift money from one party to another.

If you’re Ethereum (CCC:ETH-USD) founder Vitalik Buterin, that’s excellent news. Not only do these tokens strengthen your network. You occasionally receive billions of dollars as a gag gift.

For the rest of us, these are lottery tickets. There are just so many — 965,900 tokens at last count — and only a handful generate supernormal profits.

So, which of these are best buys?

My suggestion is simple. Buy the top-performing coins of the past month and hold for one week.

Here’s what would have happened if you did that in April. 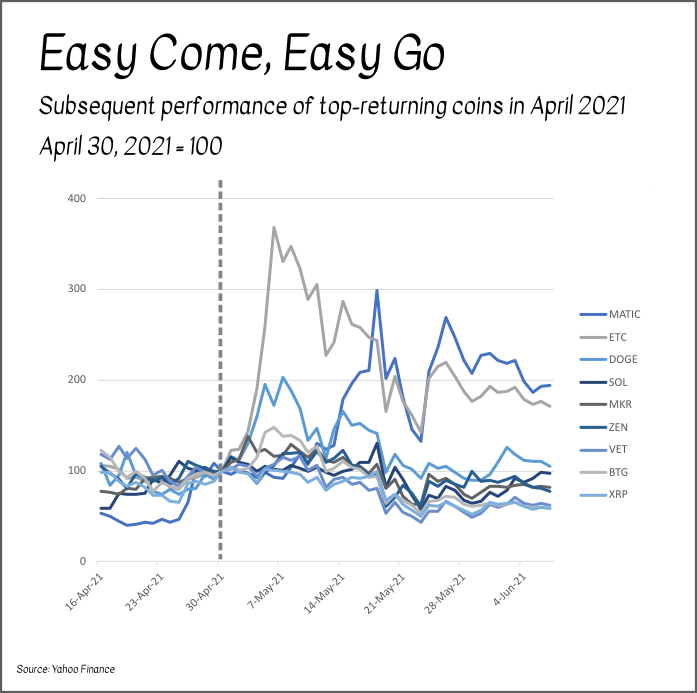 An investor who bought the major top-performing coins at the end of April would have netted a 50% return by the second week of May.

But holding on for longer than that, and your gains will quickly melt away. Here’s the same graph showing just the average return. 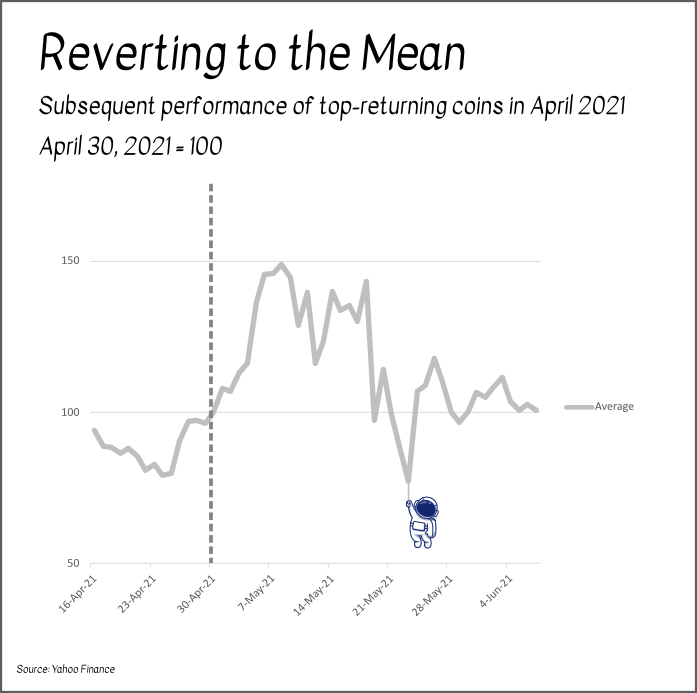 It’s hard to have missed Clover Health in recent days.

“This is one of the most straightforward investments I’ve ever made,” Chamath Palihapitiya said at the time.

(Chokes back the giggles).

If he were referring to the price, he has a point. The Clover Health / Social Capital III Merger generated one of the few SPACs that saw its price dip below the $10 pre-merger level.

But if he were talking about Clover’s business, he might have picked up the wrong S-1 off his desk. Clover’s business drivers are even more complex than those at Palantir (NYSE:PLTR), another Reddit favorite. Instead, it looks much like UnitedHealth’s Optum or Bright Health — complicated insurance businesses that live and die by the formulas that determine their star ratings. (Older people who can afford these plans rarely buy poorly rated ones).

From that perspective, Clover Health is fighting an uphill battle. Its 3-star rating Medicare Advantage (MA) puts it in the lowest tier of health insurers in its core market; the firm has instead relied on aggressively marketing to clinicians to push its product.

In other words, they’ll try to get your doctor to sell you on a plan by giving them a larger rebate. The DoJ is apparently investigating.

Nevertheless, Clover’s rise reminds us that Reddit investors don’t particularly care if what their investments do is particularly ethical. If it’s cheap, it’s a buy.

Back to crypto now. Investors will probably look back at mid-2021 as a time where our remaining bit of common sense went out the window. Technologically advanced coins like Ethereum, Cardano (CCC:ADA-USD) and Polkadot (CCC:DOT1-USD) no longer feature in the top-10 most-viewed coins on CoinMarketCap, a popular crypto tracking website.

In their place, alt-Doge have taken over. 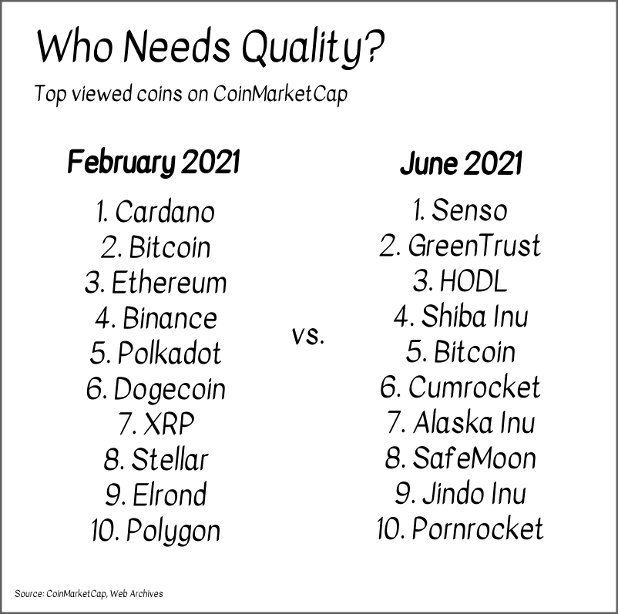 It turns out that retail investors are incredibly disciplined when it comes to avoiding losers. In the past month, $10,000 invested in the left-column coins would have shrunk to $7,700. Meanwhile, the June moon rockets would have made $10,000 into $241,000.

Retail investors are a surprisingly self-aware group. If it’s not generating you quick returns, it’s better to move on and try losing money some other way.

By the Numbers: Cryptomania Ahoy!

On Monday, I highlighted Ford (NYSE:F) for potential upside re-rating. Now, it’s Louis Navellier and his team’s turn to give their in-depth take on the automaker’s massive turnaround potential.

Tesla (NASDAQ:TSLA) has a new fan! Joanna Makris looks into how the EV maker’s charging stations could crimp growth at newer entrants

Mark Hake identifies an underrated competitor to the streaming wars in his new analysis on the industry.

El Salvador will become the first country to adopt Bitcoin (CCC:BTC-USD) as legal tender. The law compels every business to accept the cryptocurrency for payment. Time will tell if this massive experiment works as intended.

All hype cycles seem to go through similar phases.

Cryptocurrencies are in phase 2 of this cycle. Many of these alt-Doge coins don’t even pretend to have a purpose; if they can garner enough attention for early investors to cash out, that’s good enough for them.

But the tide will eventually turn back. As alt-Dogecoins wane, investors will flock back to the original Shiba Inu coin.

Keep watching Dogecoin prices. The moment it starts a meaningful rise, don’t be surprised if #DogeCointo1Dollar comes roaring back during the Doge days of summer. 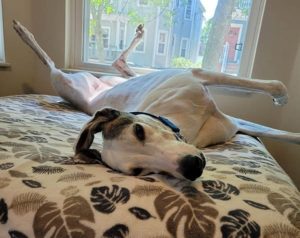 Thomas Yeung is an expert when it comes to finding fast-paced growth opportunities on Reddit. He recommended Dogecoin before it skyrocketed over 8,000%, Ripple before it flew up more than 480% and Cardano before it soared 460%. Now, in a new report, he’s naming 17 of his favorite Reddit penny stocks. Claim your FREE COPY here!

On the date of publication, Tom Yeung did not have (either directly or indirectly) any positions in the securities mentioned in this article.

Tom Yeung, CFA, is a registered investment advisor on a mission to bring simplicity to the world of investing.

The post The Rise of the Alt-Doge appeared first on InvestorPlace.

Sugar detox? Cutting carbs? A doctor explains why you should keep fruit on the menu