CDMX will begin universal vaccination for millennials with Sputnik V, regardless of its mayor's office

More than 800,000 people between the ages of 30 and 39 will be able to get vaccinated with the Sputnik V biologic next week.

By Alto Nivel July 16, 2021
This article was translated from our Spanish edition using AI technologies. Errors may exist due to this process.
This story originally appeared on Alto Nivel

Eduardo Clark , director of Digital Government at the CDMX Digital Agency for Public Innovation , announced that, as of June 20, all adults “Millennials” will be able to go to be vaccinated at any city hall in the capital, regardless of their place of residence .

“The objective is to vaccinate the majority of people between now and August 30, which is the date on which the school year begins. Continue with the measures and we must go to the vaccination ”, said the Head of Government, Claudia Sheinbaum.

Details on the inoculation sites will be announced in the following days.

"To avoid crowds, we ask you to bring your printed registration voucher and the venues that fill up more will have more vaccination cells," said the Head of Government, Claudia Sheinbaum Pardo. 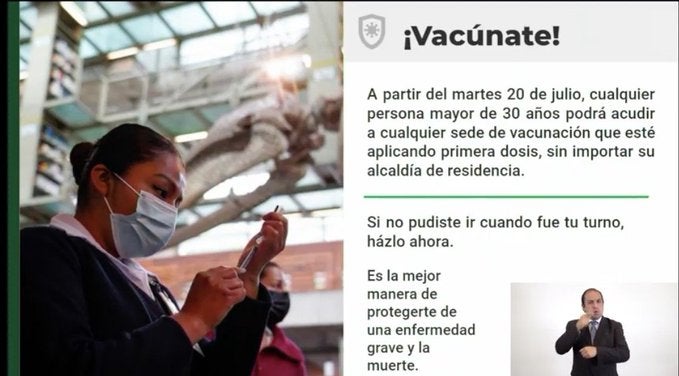 The government of Mexico City reported on the progress of the vaccines applied and those that will be supplied to age groups of 30 to 39 years next week. He stressed that the Russian biological Sputnik V will be applied in these city halls of the capital:

In this way, the first dose of Sputnik V is expected to be applied to more than 800,000 people between the ages of 30 and 39, the capital's government said.