Dorm Costs Have Soared, but Many Freshmen Have No Choice

Living in the dorms is a rite of passage for millions of first-year college students. But like the rest of the college experience, it’s costly. And in...
Next Article


Living in the dorms is a rite of passage for millions of first-year college students. But like the rest of the college experience, it’s costly. And in many cases it’s mandatory.

Moving my only daughter into the dorms of scenic Appalachian State University her freshman year was tough on us both, but an exciting time. She received an academic scholarship for tuition and fees, so room and board were among our only financial obligations. Well, the only official ones — college kids have many “needs.”

As with many four-year colleges and universities, App State requires freshmen to live on campus. They’re the only ones guaranteed housing. Students beyond their first year interested in staying in the dorms enter a lottery system to battle for the remaining rooms. By early spring of her freshman year (2019-20), she got word she had “won” a room for sophomore year. But then COVID-19 hit, and like many other college students, she finished her 2020 spring semester at home.

As summer 2020 passed, the thought of living in tight dorm quarters looked less and less appealing, so we began apartment hunting. We found that although the rental market in the small college town of Boone, North Carolina, is competitive, she could get into an apartment for less than the cost of a dorm.

Student housing is a boon to universities and colleges across the country, and dorm costs have skyrocketed 111% at public four-year institutions over the past 30 years, far faster than rents. In many markets, first-year students could rent apartments nearby for less than they pay on campus, particularly if they’re sharing the costs with roommates. But they’re not always given that option.

It isn’t clear how many colleges and universities currently require most freshmen to live on campus. The Department of Education does not collect this data, though 74 schools report requiring all first-time degree-seeking students — no matter their year — to live on campus, no exceptions. Whatever the exact figure, many schools do this, often under the justification that on-campus living is a good transition into adulthood. But if we allow 18-year-olds (or their parents, by proxy) to incur the costs of college and, in many cases, take on student loan debt to cover them, isn’t the better transition into adulthood allowing them to determine just how that money is best spent?

Housing is a considerable source of college revenue

As COVID-19 spread and dorms shuttered in 2020, colleges’ reliance on student housing as a source of revenue became apparent. Indeed, auxiliary revenue (which includes housing, dining, athletics and other sources), was one of the hardest-hit categories of revenue loss, especially among larger institutions, according to data obtained from 107 schools by the Chronicle of Higher Education. In an effort to minimize this loss early on, some schools debated whether to provide refunds for the remainder of the semester when students were sent home and dorm rooms sat empty, and added language to 2020-21 housing contracts protecting them against potential future refunds. This is because institutes of higher learning make considerable money on student housing, though pinpointing exact figures is difficult.

Four-year institutions made $28 billion on “ancillary enterprises” in the 2018-19 school year, roughly 8% of all revenue, according to the National Center on Education Statistics. This figure lumps housing and dining in with parking, on-campus stores and other sources of revenue. New York University’s 2021 fiscal budget, one of few publicly available online, reveals 10% of its revenue comes from student housing and dining.

This isn’t to say on-campus living requirements are rooted in money alone. Some of the arguments colleges make for policies are sound: Living in a dorm can be enjoyable, convenient, good for grades and retention, and a more gradual segue into adulthood. However, this doesn’t make it the right fit for everyone.

Making on-campus housing optional and at the discretion of students (and their parents, no doubt) could lead to an increased supply of available dorm rooms for upperclassmen. In other words, the housing would more likely be available to students for whom it’s a good fit, no matter their academic year.

Most schools with on-campus freshman housing requirements have ways to bypass those mandates, but what passes as proper justification for living off-campus is often very narrow, if it’s clear at all. At my daughter’s college, for example, only some nontraditional students, those living at a parent’s home within 30 miles of campus, or those taking only online courses while living with a parent are eligible for an exemption. That last option was added only during the pandemic. Unfortunately not eligible for an exemption: those who have made a sound and thoughtful decision that living off-campus is a better fit, whether for financial or other reasons.

From 1989-90 to 2019-20, the average room rate among public four-year institutions rose 111% after accounting for inflation, to $6,655 per academic year, generally 30 weeks, according to data from the Department of Education. Incidentally, public four-year institutions are some of the most affordable. Compare this to the national median gross rent — the Census measure that includes both the contracted rent amount plus utilities — which grew just 24% during that same period.

At that average room rate, the student’s weekly housing cost is $222. Median gross rent works out to about $253 per week. So, dorms are cheaper? Hang tight. Lest you think I’m undercutting my own argument here, let’s not forget the costs incurred moving into and out of the dorms at least once per academic year, if not per semester, along with the costs of finding other housing during the remaining 22 weeks of the year, and the fact that very few college students are paying the entire rent of an apartment or house on their own.

Is it always cheaper off campus? No

New York City is one of the priciest and most competitive rental markets, so students attending college at highly competitive and expensive institutions such as New York University or Columbia University may breathe a sigh of relief knowing they have on-campus living options. In fact, the weekly room rate at Columbia’s freshman dorms is a couple of hundred dollars cheaper than one person’s share of rent on a median-priced two-person, two-bedroom apartment in Manhattan, according to the June 2021 Elliman Report, a monthly rental market report. However, the difference is negligible between several of NYU’s freshman dorms and that same median rent.

The COVID pandemic brought with it slowed rent growth and even declines in many urban centers, according to data from Realtor.com. As of May, some pricey metro areas including New York City, San Francisco and San Jose are still seeing rents lower than last year. Students able to freely participate in local rental markets may have been able to lock in rents lower than what they’d pay in the dorms, even in big cities. 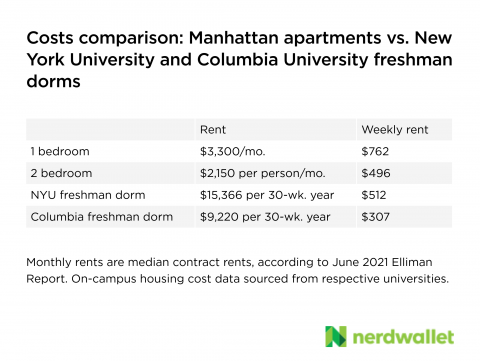 App State is a public four-year college nestled in the mountains of Western North Carolina. It’s a gorgeous place and a welcoming institution. The mascot is a Mountaineer named Yosef wearing a flannel shirt and a beard, for crying out loud. And their football is some of the best. Go ‘Neers! The freshman dorm my daughter was assigned to in 2019-20 opened to students in 1970 and doesn’t have air conditioning. The weekly rate there is roughly $50 more than that of one person’s share of a two-bedroom rental, according to Census data. Now, she shares a four-bedroom home, where her portion of the rent is about $140 per week, and includes parking and all utilities. 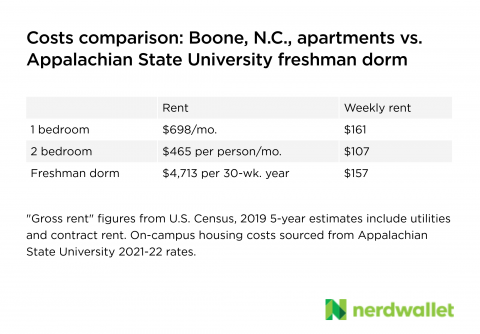 It doesn’t always make sense — financial or otherwise — to rent an apartment as a college student. However, when it does make sense, students should be able to elect that option, or any other option that fits their budget, long-term goals and any other personal factors. We allow, even encourage, 18-year-olds to take on student loan debt — debt that they’ll typically carry for at least the first decade of their career, if not longer. On-campus housing requirements add insult to the mounting costs of higher education by not giving students latitude to decide how their money — and first year away from home — are best spent.

Students opting for a college that requires on-campus housing have little to no say in the matter. In that case, the best advice is to look into possible exemptions from the requirement if staying in the dorms would cause considerable hardship, and always be strategic with your use of student loans.

For those with a choice, a careful comparison of your options will help ensure you’re making the right choice for your budget and your long-term educational goals. Make sure to include:

The article Dorm Costs Have Soared, but Many Freshmen Have No Choice originally appeared on NerdWallet.