Jeff Bezos and Blue Origin are not giving up on the crusade to conquer space and are now suing NASA alleging irregularities in giving the lunar landing project to SpaceX from Elon Musk.

By Entrepreneur en Español August 17, 2021
This article was translated from our Spanish edition using AI technologies. Errors may exist due to this process.

Jeff Bezos has repeatedly expressed his dissatisfaction with the contracts awarded by the United States Space Agency (NASA) to Elon Musk's aerospace company SpaceX. The news is that the owner of Blue Origin sued the United States government for alleged irregularities in the allocation of the project to manufacture the lunar lander for the Artemis Moon program.

Jeff Bezos vs. Elon Musk for the conquest of space

It is well known that two of the three richest men in the world have long been fighting a battle for the conquest of space . However, the competition began to escalate last April, when NASA awarded SpaceX a $ 2.9 billion contract to build the lunar lander for the Aretemis Moon project.

With this, Elon Musk's aerospace company won the opportunity against defense contractor Dynetics and Bezos's Blue Origin , which submitted a $ 5.9 billion proposal. This is because the United States Congress only allowed a contract to be made, as a way to limit costs.

Thinking that the agency would have bid for the cheapest offer, Bezos himself offered to cover up to $ 2 billion of the costs if NASA awarded his company a lunar landing contract.

#ElonMusk plans to send humans to the Moon before 2024 https://t.co/tByqUjDKMF

At the time, Bezos challenged the decision before the United States Federal Government Accountability Office, arguing that:

" NASA has executed a flawed acquisition for the Human Landing System program and moved the goalposts at the last minute. In NASA's own words, it has made a 'high risk' selection," said a Blue spokesperson. Origin to Engadget . "His decision eliminates competitive opportunities, significantly reduces the supply base, and not only delays, but also jeopardizes America's return to the moon ."

Then, on July 30, the Accountability Office denied Bezos's protest . Instead, he supported NASA's decision to choose a single vendor to build the lunar lander. This, in turn, ratified SpaceX as the company chosen to join the mission to the Moon.

Jeff Bezos doesn't give up

Of course, Jeff Bezos did not give up and in response they published an infographic on the Blue Origin website criticizing the SpaceX proposal for its complexity and risks, while highlighting the "facilities" of their project to do the same but of more efficiently, they argue. 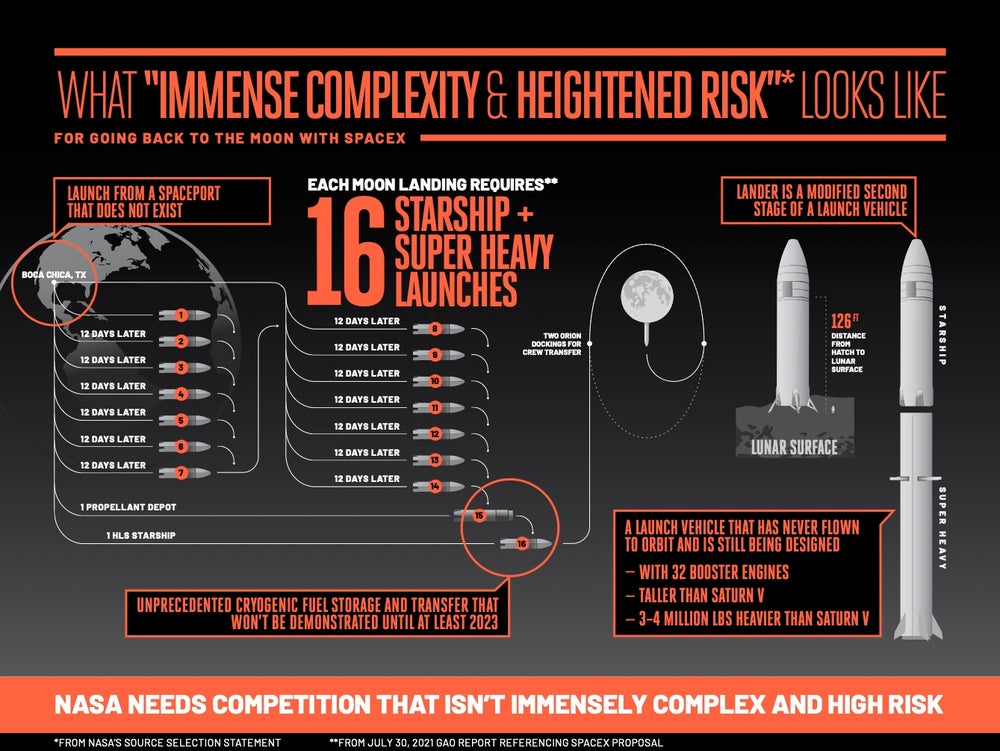 This is the infographic with which Jeff Bezos' Blue Origin tries to show that Elon Musk's SpaceX proposal is more complex and risky than the ruya. Image via Blue Origin .

Blue Origin also released a statement titled 'NASA's Decision to Eliminate Competition from the Human Landing System is Wrong for the United States' , accusing the space agency of a "flawed award" to SpaceX and of allowing "unfair competition. " .

Now, instead of just complaining online, the Amazon mogul took one more step in his quest. Let's remember that on July 20 Jeff Bezos successfully achieved his first manned trip to space with Blue Origin and even Elon Musk subtly wished him 'luck' .

The 'Blue Origin' lawsuit remains sealed and NASA must present its response before October 12.

In the event that Jeff Bezos' lawsuit against the United States government proceeds, the legal lawsuit would affect the Artemis Moon program until the allegation is resolved, and NASA could not give SpaceX the promised budget, which could delay the expected one. return of humans to the Moon .