Box, Inc. BOX reported second-quarter fiscal 2022 earnings per share of 21 cents, which surpassed the Zacks Consensus Estimate by 23.5%. Further, the figure surged 16.7% from both the year-ago period and fiscal first-quarter 2022.

Further, it closed 74 deals during the fiscal second quarter, up 16% year over year.

Additionally, the company saw a record 73% attach rate of its suites due to increasing demand for multi-product suite offerings.

Box’s net retention rate was 106% at fiscal second quarter-end, up 300 basis points (bps) from the prior quarter. The increase was driven by strength in customer expansion and retention.

Coming to price performance, Box has returned 42% on a year-to-date basis against the industry's decline of 4.9%. 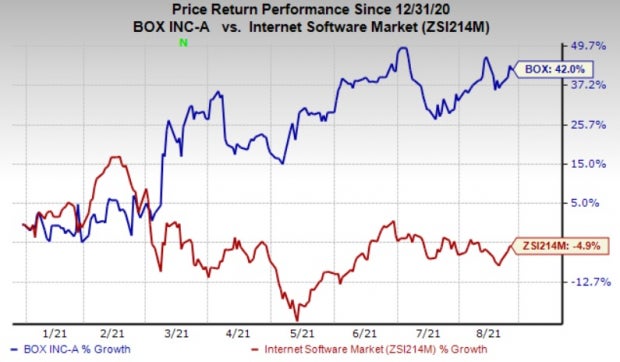 Increasing work-from-home and learning online trends as well as rising demand for cloud applications as a result of the ongoing coronavirus pandemic are likely to continue benefiting the company in the upcoming period.

Billings were $213.1 million for the reported quarter, which increased 13% year over year. This improvement was due to increase in sales from both Enterprise and SMB.

Deferred revenues were $422 million, improving 16% from the prior-year quarter.

The company rolled out e-signature capability, Box Sign, to help businesses in digitizing and modernizing agreements, which is worth mentioning.

Additionally, its integration with Service Now’s Legal Service Delivery application was made generally available in the reported quarter.

Non-GAAP gross profit for the fiscal second quarter was $159.8 million, up 13% year over year. As a percentage of revenues, the figure expanded 100 bps from the prior-year quarter.

Box's operating expenses of $159.8 million increased 10.6% year over year. As a percentage of revenues, the figure contracted 62 bps from the year-ago quarter.

On a non-GAAP basis, the company recorded operating margin of 21%, which expanded 500 bps from the prior-year quarter.

Accounts receivables amounted to $134.4 million at fiscal second quarter-end, which increased from $112.3 million at prior quarter-end.

For third-quarter fiscal 2022, Box expects revenues between $218 million and $219 million. The Zacks Consensus Estimate for the same is pegged at $217.8 million.

On a non-GAAP basis, the company projects earnings per share of 20-21 cents. The Zacks Consensus Estimate for the same is pegged at 19 cents per share.

On a non-GAAP basis, the company projects earnings per share of 79-81 cents. The consensus mark for the same is pegged at 76 cents per share.

Long-term earnings growth rates for F5, Paycom and Digital Turbine are currently projected at 14.4%, 25% and 50%, respectively.