Amneal's (AMRX) IPX-203 increases "Good On" time by 1.55 hours per dose versus immediate-release CD/LD in patients with Parkinson's disease.

Amneal Pharmaceuticals, Inc. AMRX announced positive top-line data from the pivotal phase III study — RISE-PD — evaluating its novel formulation candidate, IPX-203, in patients with Parkinson’s disease (PD) who have motor fluctuations. The company met its primary endpoint of “Good On” time as well as secondary endpoint of “Off” time.

Based on promising data from the pivotal study and other supported data, the company plans to file a new drug application seeking approval for the candidate as potential treatment for PD in mid-2022.

Shares of Amneal gained 14.4% during after-hours trading on Aug 25, following the study data readout. In fact, the company’s shares have increased 21.4% so far this year against the industry’s decrease of 11.7%. 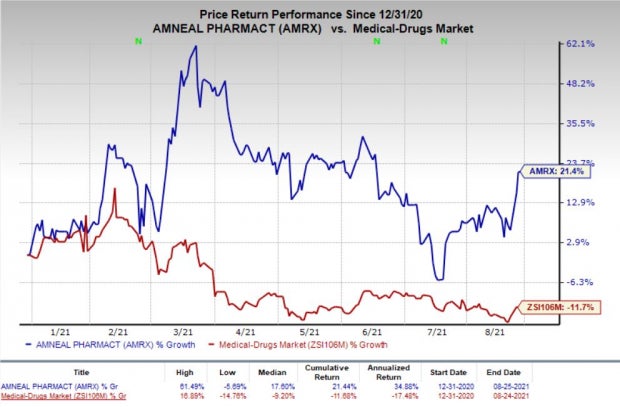 Top-line data from study showed that IPX-203 demonstrated superior “Good On” time, measured in hours per day, from baseline compared to immediate-release CD/LD at the end of the 13-week treatment period. “Good On” time is defined by the sum of “On” time without dyskinesia and with non-troublesome dyskinesia.

The company believes that despite introduction of new PD medications in past few years, there is still demand for medications with better duration of benefit. A potential approval to IPX-203 will also boost Amneal’s Specialty Pharma portfolio.