Quarterly performance was affected by tough year-over-year comparisons, thanks to elevated demand conditions stemming from the pandemic in the prior-year quarter. Divestitures and brand discontinuations were other headwinds. The company provided a dismal view for the first half of fiscal 2022, as it continues to lap the gains of high consumption in the year-ago quarter.

Shares of this organic and natural products company declined 9.1% during the trading session on Aug 26, following fourth-quarter results announcement. The company’s shares declined 10.8% in the past three months against the industry’s fall of 7.9%. 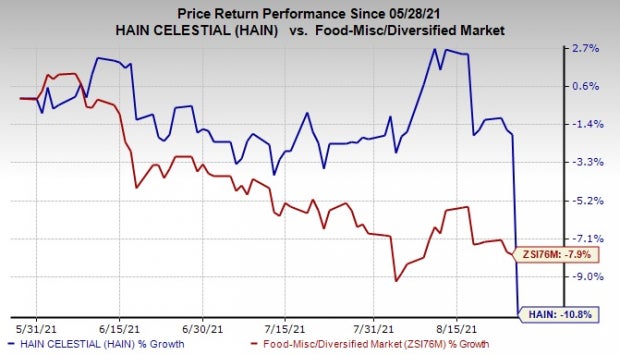 Hain Celestial posted adjusted earnings of 39 cents a share that came a penny below the Zacks Consensus Estimate of 40 cents. Nonetheless, the bottom line increased 22% from 32 cents reported in the prior-year quarter. Higher margins acted as an upside.

Net sales came in at $450.7 million that fell short of the consensus mark of $462.3 million. The top line declined 12% year on year on a reported basis and 17% on a constant-currency (cc) basis. Overlapping of pandemic-led volume surge witnessed in the prior-year quarter affected the top line. Divestitures and brand discontinuations hurt sales by 900 basis points (bps). Currency acted as a tailwind and contributed around 470 bps to sales. On adjusting for divestitures, discontinued brands and foreign exchange, net sales fell 8% year over year. Adjusted net sales increased 5% from fourth-quarter fiscal 2019 levels.

Adjusted gross margin increased 49 bps year on year to 25.7%, buoyed by gains from supply-chain productivity initiatives and sale of the fruits business. The upsides were partly offset by labor cost inflation as well as higher delivery and warehousing expenses in the United States. Adjusted gross margin improved more than 300 bps from fourth-quarter fiscal 2019 levels.

Net sales in the North America segment fell 15% year over year to $253.3 million. On adjusting for currency movements, divestitures and discontinued brands, net sales declined 12%. The decline was caused by lapping of elevated at-home food consumption in the prior-year quarter, due to the pandemic. The lapping of strong hand sanitizer sales in the prior-year quarter marked a headwind of more than 300 bps. Sales of the Get Bigger brands, which accounted for nearly 71% of North America net sales, showed a 9% decline year on year.

Medifast, Inc. MED, with a Zacks Rank #2 (Buy), delivered an earnings surprise of 16% in the last four quarters, on average.

Flowers Foods, Inc. FLO has a trailing four-quarter earnings surprise of 14.4%, on average. It carries a Zacks Rank #2.