Moderna, Inc.’s MRNA COVID-19 vaccine, mRNA-1273, got a breather in Japan as the company was reportedly allowed to use the uncontaminated vials from the same lots that contained vials with contaminants, in two major regions of the country. The news comes on the heels of two death cases following vaccination with the vaccine in Japan. However, any link between the deaths and the vaccine is yet to be established.

Shares of Moderna have surged 254.9% so far this year, riding on the success of its sole marketed product, mRNA-1273, compared with the industry’s increase of 0.7%. 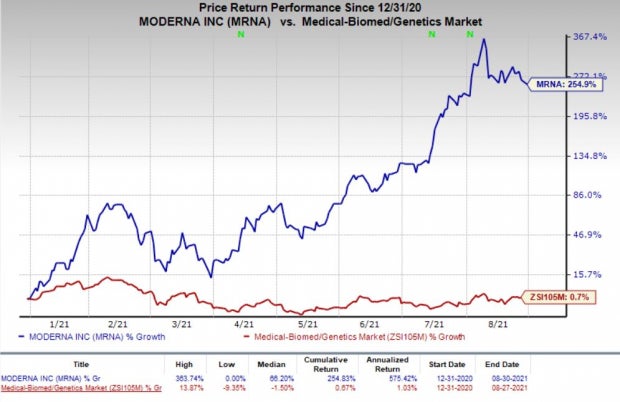 Per a Reuters article, the company’s local distribution partner, Takeda Pharmaceutical TAK received reports of discovery of several vials containing foreign material from different lots, especially from Gunma and Okinawa prefectures, over the past two weeks. These contaminated vials led to temporary halting of vaccination with mRNA-1273 last week across 863 vaccination centers as a precautionary measure.

Earlier this week, the Japanese health ministry had stated that the foreign materials in Moderna’s vaccine shots can occur due to improper insertions of needles into vials that may have led to breaking of the rubber stopper into bits. Moreover, there were no safety issues found for shots from vials in the Okinawa and Gunma lots, per a CNBC article. Following this observation, the Japanese health ministry allowed the use of the vaccine from other vials in Okinawa and Gunma that arefound to be free of contamination. The lots of Moderna’s COVID-19 vaccine in Okinawa and Gunma comprise about one million doses.

Moreover, vaccination of the majority of Japanese citizens is the need of the hour amid rising cases of daily infections due to prevalence of the Delta variant. Daily new cases have crossed the 25,000-mark for the first time. The rollout of COVID-19 vaccines in Japan has been relatively slower. The contamination issue with Moderna’s vaccine hurt Japan’s vaccination process further.

Details of the Contamination

Reportedly, some syringes and a vial were found to contain black substances while a syringe contained pink substances. Some believe them to be metallic particles while the health ministry suggests that contaminants may be bits of the rubber stopper on vials due to the incorrect use of needles.

Moreover, a manufacturing issue at one of the production lines of Moderna’s bottling partner for its COVID-19 vaccine, Laboratorios  Farmacéuticos  Rovi, can also be a cause of the contamination.

Currently, Rovi, Moderna and Takeda are coordinating on an ongoing investigation to determine the contaminants and their effects. Some experts believe that the contaminants are unlikely to be harmful as there have been only two reported cases of deaths among approximately 500,000 doses of Moderna’s vaccine in Japan over the past two weeks.

We note that the disruption in the rollout of Moderna’s vaccines in Japan and any such setback in other countries do not bode well for the company amid rising competition. We note that its key competitors in the COVID-19 vaccine space, Pfizer PFE/BioNTech BNTX have already gained full approval for their vaccine in the United States and are also nearing a similar approval for its booster dose. Moderna’s vaccine is yet to gain full approval for its vaccine and it may be granted in few weeks’ time.