Northrop (NOC) is set to integrate the Mode 5 software for Japan and the Republic of Korea's Global Hawk Fleet.

Northrop Grumman Corp.’s NOC Aerospace Systems business segment recently secured a modification contract to co-develop, test, and integrate the Mode 5 software for the Global Hawk program. The deal is expected to be completed by Jul 31, 2023.

Valued at $40 million, the contract will serve Japan and the Republic of Korea. The task under the agreement will be executed in San Diego, CA, while integration efforts will be completed in Misawa Air Base, Japan; and Sacheon, Air Base, Republic of Korea.

Significance of the Global Hawk Aircraft

Northrop’s Global Hawk is an unmanned surveillance aircraft, which provides military field commanders with high-resolution, near-real-time imagery of large geographic areas. Powered by a RollsRoyce RYCEY AE 3007 turbofan engine, these jets can fly for as long as 32 hours on one load of fuel.

Global Hawk has amassed more than 320,000 flight hours with missions flown in support of military operations in Iraq, Afghanistan, North Africa, and the greater Asia-Pacific region. This surely reflects the strong demand that this fleet enjoys in the international defense space, which boosts order flow prospects for the production and associated upgrades of the Global Hawk program.

In recent times, the increasing geopolitical conflicts across borders have prompted nations to enhance their surveillance manifold. This is where unmanned aerial vehicles (UAVs) like Global Hawk play a pivotal role since they offer services with minimum human casualties. As a result, demand for unmanned surveillance jets is on the rise on a global scale. This is evident from the latest contract win by Northrop, alongside a massive $4.8-billion contract the company acquired in November 2020 to conduct development, modernization, retrofit, and sustainment activities for the Global Hawk program.

The global UAV market, per a Markets and Markets report, is projected to expand at a CAGR of 16.4% to reach $58.4 billion by 2026 from 2021, with increasing procurement of military UAVs by defense forces worldwide being one of the primary growth catalysts. Such impressive growth projections should usher in more such contract wins for Northrop, with the company being one of the major UAV manufacturers.

Other Defense Players Poised to Benefit

Considering the growth prospects of the global UAV market, it is quite obvious that other major manufacturers of surveillance jets like Boeing BA and Lockheed Martin LMT will also benefit.

Lockheed’s U-2 Dragon Lady has been supporting the U.S. Air Force’s mission of superior surveillance for 65 years.

Shares of Northrop have witnessed 20.9% growth in the past year against the industry’s decline of 7.9%. 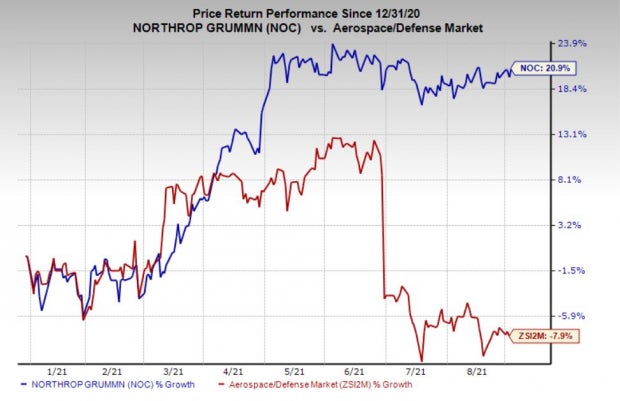 Tech IPOs With Massive Profit Potential: Last years top IPOs surged as much as 299% within the first two months. With record amounts of cash flooding into IPOs and a record-setting stock market, this year could be even more lucrative.

September Swoon Just Getting Started: Dial In Your Buy Targets

Will Landec (LNDC) Report Negative Earnings Next Week? What You Should Know

Jabil (JBL) Earnings Expected to Grow: What to Know Ahead of Next Week's Release