Match Group, parent company of Tinder and other dating apps, saw its share price rise just after it was announced that it will enter the select group of companies listed on the Dow Jones S&P 500 Index.

By Mairem Del Río September 8, 2021
This article was translated from our Spanish edition using AI technologies. Errors may exist due to this process. Opinions expressed by Entrepreneur contributors are their own.

Last Friday, it was announced that S&P Dow Jones Indices will add the Match Group company to its exclusive S&P 500 index. The news sent Tinder's parent company up on the Nasdaq index, which has already risen 10.7% in just two days.

That same Friday, September 3, Match Group shares closed at $148.19 per unit, according to Nasdaq data. The S&P 500 announcement came a few hours later.

Related: Tinder Relaunched the 'Work Mode' to Find a Partner During Working Hours. Ready to Go Back to the Office? 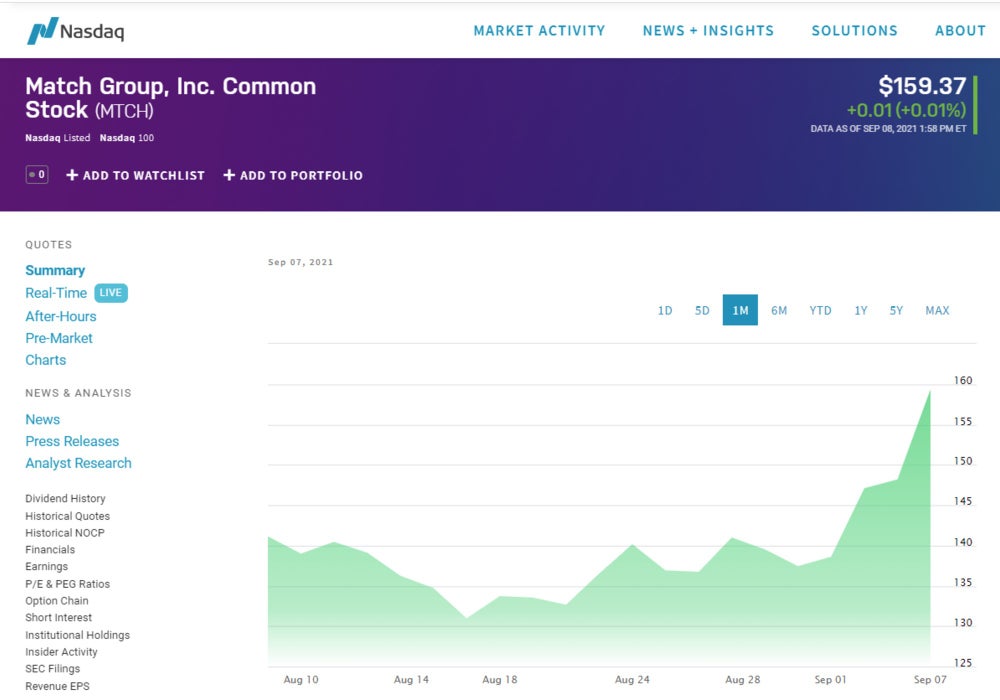 As of September 20, as soon as the stock market opens, Match Group will be listed in the exclusive group of the S&P 500.

Related: Beginner Investor's Guide: The Most Frequently Asked Questions About the Stock Market in 2021

Match Group was one of the great beneficiaries of the boom in dating apps during the pandemic. Since the lockdowns began, Tinder in particular has seen a significant increase in new users, who were looking for love online in the absence of face-to-face dates.

In mid-March 2020, just before quarantines were announced across most of the world, each Match Group share was worth $47.35, according to data from Yahoo Finance.

Shortly before Valentine's Day, in February 2021, they hit their all-time high of $172.13 , according to Nasdaq. This represents an increase of more than 263% in less than a year, something that we should not underestimate.

In July 2020, the company separated from InterActiveCorp (IAC), an American holding company that has companies in the online sector and social networks such as Vimeo in its portfolio. Since its departure, the Tinder parent has had more winning streaks than losses, and this sudden spike could bode well.

Related: The 5 Worst Investment Tips on TikTok and Other Social Networks

Tinder relaunched the 'work mode' to find a partner during work hours, ready to go back to the office?

Single and unvaccinated? More than half of Mexicans would only date someone vaccinated