Twitter (TWTR) tests new Communities feature among users with a shared interest in an attempt to boost platform engagement.

Twitter TWTR recently announced that it is testing a new feature called Communities, which would help groups of Twitter users to engage and encourage them to interact with other users. The company aims to create a more intimate space for conversation.

Users will be able to join these new social hubs and tweet directly to other people with shared interests rather than their regular group of followers. Those tweets will still be public but replies will be limited to other community members.

Communities will be created and maintained by designated moderators who will have the ability to invite other users to the group directly and remove content posted within the group.

The moderators can pick the focus of the groups and create the community rules. It is important for moderators to continuously meet Twitter’s eligibility requirements, including the non-violation of Twitter Rules. Both members and non-members of Communities can report any potential violations of the Twitter Rules to Twitter.

Much similar to Facebook FB Groups, Communities is the latest addition in a string of big product bets from Twitter to court creator communities and improve platform engagement. The company rolled out Super Follows, its paid subscription tool earlier this month and invited selected users to sell tickets for audio rooms with Ticketed Spaces.

This Zacks Rank #3 (Hold) company is also testing edge-to-edge media in tweets on iOS, creating a more full-screen, almost Instagram-like experience for photos and videos, which appear on a user’s timeline in an attempt to better support conversations that are both visual and text-based. You can see the complete list of today’s Zacks #1 Rank (Strong Buy) stocks here.

The company has been further testing a one-time payment feature called Tip Jar to enable creators to monetize their content and earn from their supporters.

This is expected to boost user growth and performance of Twitter’s shares, which have returned 15% in the year-to-date period against the Zacks Internet – Software industry’s negative return of 1.7%. 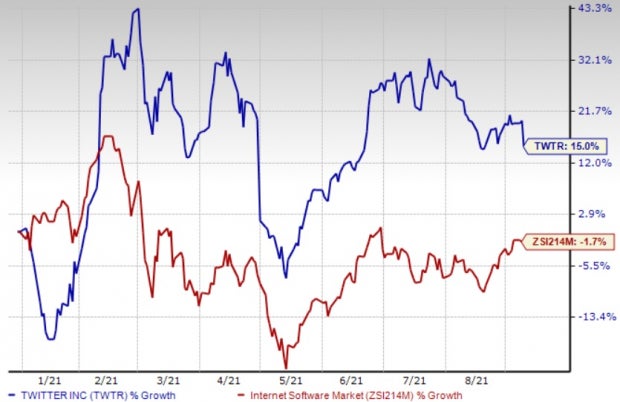 Like Facebook, Alphabet’s GOOGL Google, and Snap Inc. SNAP, Twitter has been testing new privacy-related features to give users greater control over who can see what they post on the social networking site. The company is considering enabling users to edit follower lists, and a tool to archive old tweets in an attempt to restrict its visibility to others after a specific amount of time.

Twitter’s new feature called the soft block allows users to swiftly remove unnecessary followers from their followers' list without having to block them permanently. This will enable the user to control the audience of their tweets. The company is testing the feature currently on the Twitter web and will be made available on mobile platforms as well.

Users have to click the three-dot option next to a follower's name, then select Remove follower. This action would ensure that the user's tweets no longer appear on the respective timeline.

On Sep 2, Twitter had informed that it will be soon launching a new feature called Safety Mode, which will temporarily autoblock accounts that are found sending harmful tweets to users. This is Twitter's latest attempt to reduce abusive language on its platform.

It further revealed that the beta version of Safety Mode will be launched with English-language settings enabled.