Mexico is an entrepreneurial country because, when it is needed, it is a "fighter", innovative, brave and excessive.

By March Violante September 8, 2021
This article was translated from our Spanish edition. Opinions expressed by Entrepreneur contributors are their own.

On September 19, 2017 at around 9 in the morning I shared an image on my social networks of the collapse that occurred at the Hotel San Regis caused by the 1985 earthquake. Along with that iconic postcard I put a phrase that my father told me and I really like: "Only the people can save the people." 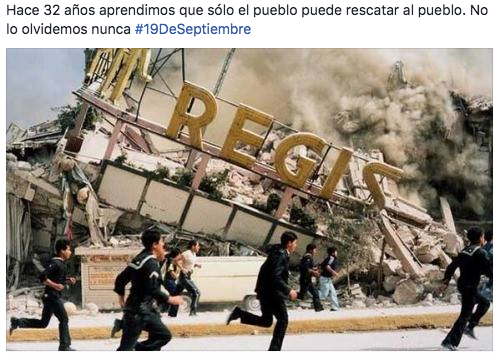 He was remembering what up to that moment had been the most catastrophic earthquake in the history of Mexico. I could never imagine that that same day, at the edge of 13:14:40 in the afternoon of that Tuesday , the central area of the country shook again for several minutes that extended into eternities, leaving more than 300 dead, dozens of victims and several missing.

Those who are chilangos (residents of Mexico City) will not let me lie. The Dantesque scene looked like something out of Hollywood's worst disaster movie: disoriented and scared people on the streets; the useless telephone lines, the saturated internet, streams of news that said that this or that building had collapsed ...

The most affected states were Oaxaca, Morelos, the State of Mexico, Guerrero, Puebla and Mexico City.

However, I remember that date not only because of the destruction and to commemorate our dead, but because that day Mexico changed its perception of itself. Thousands of people took to the streets with glasses of water for those who had to walk home because the subway service had been suspended. Still others who did have light, hung extensions from their windows so that people could charge their cell phones. Still others crowded the IMSS and ISSSTE hospitals with the sole purpose of going to donate blood. And as soon as the dust from the fallen buildings had finished settling, people were already scrabbling through the ruins to remove the survivors.

I was born in February 1985, so for me, the solidarity that civil society showed on September 19 and 20 of that year was distant, almost legendary. I cannot describe to you what I have felt and lived when experiencing it raw in 2017.

As Emilio Viale said in his comment El Jueves Negro for El Universal on September 20, 1985, the question that arises when seeing the response from civil society is “who called so many young men, where did so much volunteer come from, how was it? that the blood was left over in the hospitals? " 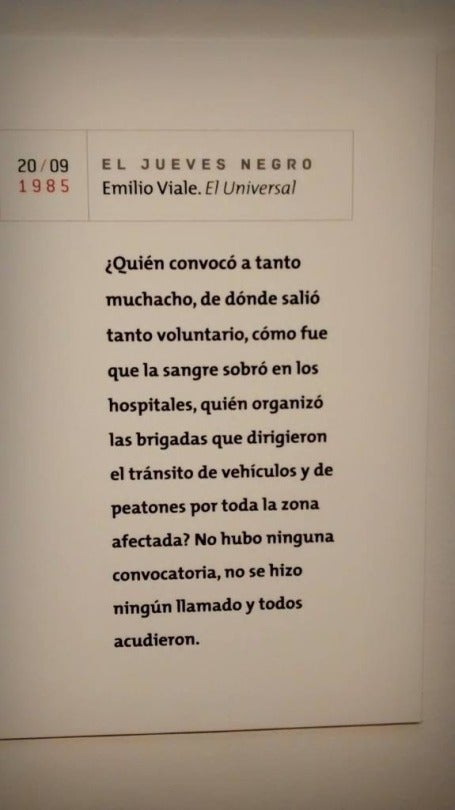 In a matter of minutes - yes, minutes - people were already using Twitter and Facebook to organize rescue brigades and collection centers . The mothers organized themselves to bring cakes, tamales and atole to the brigadistas, Army and Navy to give them strength in their work. The youngest packed the tlapalerías to get shovels and bait gloves to do double shifts to rescue people. The fist up became our strongest symbol of hope because it meant that we had to be silent because someone had been found alive.

The adorable canine pairings, where our beloved Frida came from , inspired the little ones and helped us explain what was happening. Our recreation centers such as the Arena México, the Pepsi Center and the Plaza de Toros were filled with people taking and bringing boxes of food to trucks that appeared thanks to brands that transported them to the places most affected by the earthquake.

Entrepreneurs, big and small, moved me tremendously. Many of these business men and women have companies that are just growing or are even startups and that did not hesitate to make their services available to those most in need. Everyone, young and old, helped as much as possible. For example, Eduardo Higareda created How to Help , a website to indicate how and where to help from anywhere in the country or even abroad; Marcela González, Andrea Leal, Ana Martínez and María Cantú created VI.DA., a company that helps to create an emerging housing that is easy and quick to build and, above all, dignified for people who have lost their home after a natural disaster; Échale a tu casa by Francesco Piazzesi developed a social program to give home to the victims. To mention just a few, because I'm sure many more names escape me.

We cannot forget our brothers who from other countries helped us and won the eternal affection of Mexicans. Who can see the batons that rescuers from Japan and Israel received when they returned to their countries without crying?

It's true. Mexicans have post-traumatic stress with the September earthquakes. We make bobbin memes jokes because we know how deeply terrible a natural catastrophe can be.

But that September 19 we also learned (do we remember?) That Mexico is an entrepreneurial country because it is “struggling”, innovative, brave and excessive. Because where many see a problem, we see an opportunity. Because we know that a long road can only be traveled by walking.

Perhaps we are living moments of polarization, -as in the whole world-, but we know that, when necessary, we are one people.

Four years ago we got up and we will continue to do so.

On a day like today # 19deSeptember but in 2017 the #CielitoLindo was intoned, by those Mexicans who among the rubble, the rain and the darkness did everything possible to see #Mexico built, after a strong #Earthquake shook the country. #Temblor # 19S pic.twitter.com/JSCKv2pETB