"Mezcal is not a drink, it is a whole culture," says the entrepreneur Jesús Sánchez, founder of Conejo en la Luna.

By Mairem Del Río September 15, 2021
This article was translated from our Spanish edition using AI technologies. Errors may exist due to this process. Opinions expressed by Entrepreneur contributors are their own.

When we think of the typical drink of Mexico , tequila comes to mind, but we often forget its brother distillate: mezcal . The entrepreneur Jesús Sánchez saw that this drink had a very little known cultural and historical richness. Therefore, he undertook the task of rescuing the essence of traditional mezcal , with a business based on supporting local producers and helping them grow. Meet Rabbit on the Moon , the mezcalería whose mission is to give you its rightful place in Mexico and in the world, but above all, in people's palates.

In an interview with Entrepreneur en Español , Jesús says that "the tequila that we know today is already industrialized and is produced to suit the brand or the factory, but it is no longer a traditional distillate."

"With mezcal we still have the opportunity to rescue the original producers and keep them by marketing their product through Conejo en la Luna," said Sánchez, a native of San Martín de las Pirámides, one of the towns that surround the Archaeological Zone of Teotihuacán. .

“We call it 'the historical taste', because the mezcals that we commercialize are to the taste of the original community where they come from and where they are consumed. There are mezcal masters who continue to make their distillates as they were made 100 or 200 years ago, and they have not modified it, ”explained the businessman, who comments that if any of these families stopped producing their mezcal, that recipe and that variety would be lost. forever.

What is Rabbit on the Moon?

It is a concept that integrates very well selected small producers , grouped under the Conejo en la Luna brand, but without losing their identity, their essence and, most importantly, the recognition of their work and their name.

This materializes in a rustic and cozy mezcalería located a few meters from the pyramids of Teotihuacán , with pre-Hispanic constructions as a framework. Thus, an afternoon of mezcal there becomes an immersive experience that includes visiting the distillery and the maguey garden that houses the establishment.

“Conejo en la Luna was born with the idea of having a mezcalería in which the visitor really knows mezcal from its roots and learns to distinguish a good one. Let him know that it is not exclusive to Oaxaca, that yes, it is the main producer and exponent, but that it is also produced in many regions of the country and there are many varieties, each with unique characteristics, ”says Jesús.

In addition to a selection of 24 mezcals, made by 14 mezcal masters from 7 states of the country, its menu includes a selection of Mexican dishes and cocktails made exclusively from traditional mezcal. In fact, two of the mezcals offered by Conejo en la Luna have been awarded as the 'Best Mezcal in Mexico' . 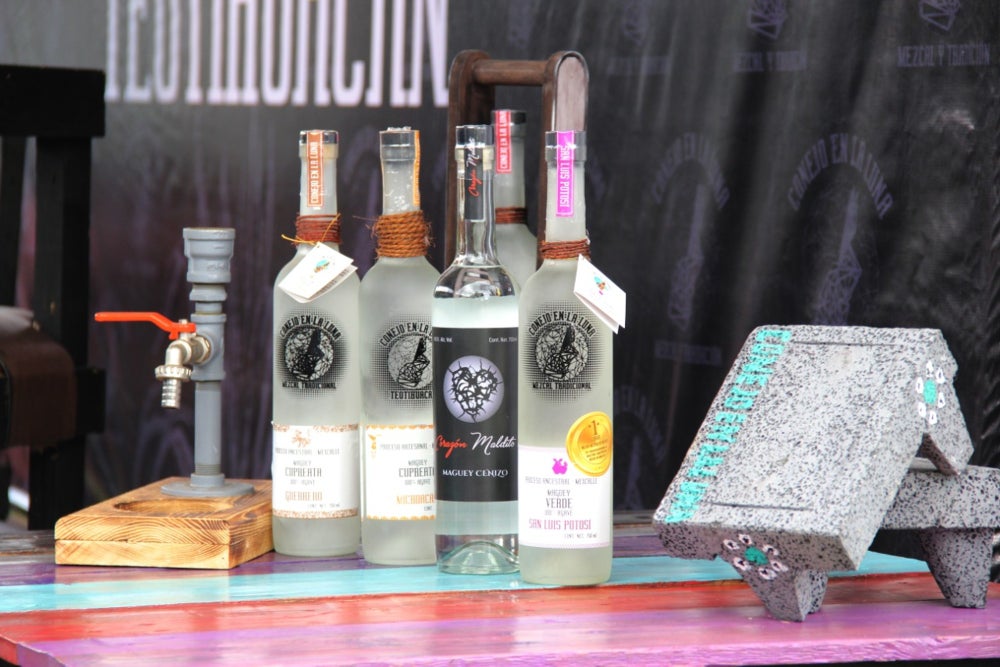 This year, taking advantage of the reopening after the pandemic, they began holding events for tasting and pairing mezcal with national and international food.

“In these experiences we include the cultural and social part of mezcal. We bring the producers to talk about their traditional and unique process to distill mezcal, and also to get involved with consumers, to tell them what their life is like within the mezcal culture in their communities ” , he explained.

For example, to celebrate the next Day of the Dead, they will have a tasting and pairing experience with typical Michoacan dishes prepared by traditional cooks. "It will be a show with music, talks, we will have the wonderful sawdust rugs, we will fly cantoya balloons and there will be a musicalized pyrotechnics show. It is about celebrating life as they do in Pátzcuaro and Janitzio. It really is something I want share with people, " Jesus explained.

When the passion for mezcal and the entrepreneurial spirit are combined

“I bring my interest in mezcal as a consumer, I discovered it about 10 years ago. I was never a fan of tequila, but when I tasted mezcal I saw that it was something very different and I fell in love, ”he relates with great enthusiasm.

“On a trip to Oaxaca, I understood that mezcal has enormous potential and is only moderately exploited in the tourist area. Why do they do it half when they have the techniques, the culture, the flavors? They have everything to take off! " , keep going.

From that trip, Jesús returned with an idea: that there should be a place where you can really know mezcals, appreciate all the cultural load they have, their flavors and, above all, that people learn to enjoy it in all its splendor. "And since I didn't find it, I did ."

Jesús Sánchez joined forces with Luis Nogales , director of the Center for Studies on Maguey and Mezcal . "I told him my whole idea and he laughed at me! But he liked the project and we began to shape it, looking for mezcal masters in each region to integrate them into Conejo en la Luna."

At the end, he says “this is all a family business, we are originally from Teotihuacán”. Of the seven brothers, five are involved in the business: he and one of his brothers carry out the administrative part, another is a chef and takes care of the menu, one sister is the mixologist and the other takes charge of other organizational tasks.

"We chose to be next to the pyramids because it is my land and, also, what better place to drink traditional mezcal than where the roots of Mexico are?", Says the businessman.

How does Rabbit on the Moon help local producers?

Jesús says that in each region of the country there are local mezcal masters who make their own brands , but do not have the tools or structure to commercialize it on a large scale. "We group them under the Conejo en la Luna brand, but always giving credit to the producer, from our menu to the label," he highlighted.

An accountant by profession, Sánchez says that “for producers to work with us, we offer them the most reasonable thing: to pay them the right price . We help them to put the price that their mezcals are really worth ”.

The businessman explains that most of the mezcaleros "only took into account the cost of the raw material and raised it a little more, then they were undercutting it." 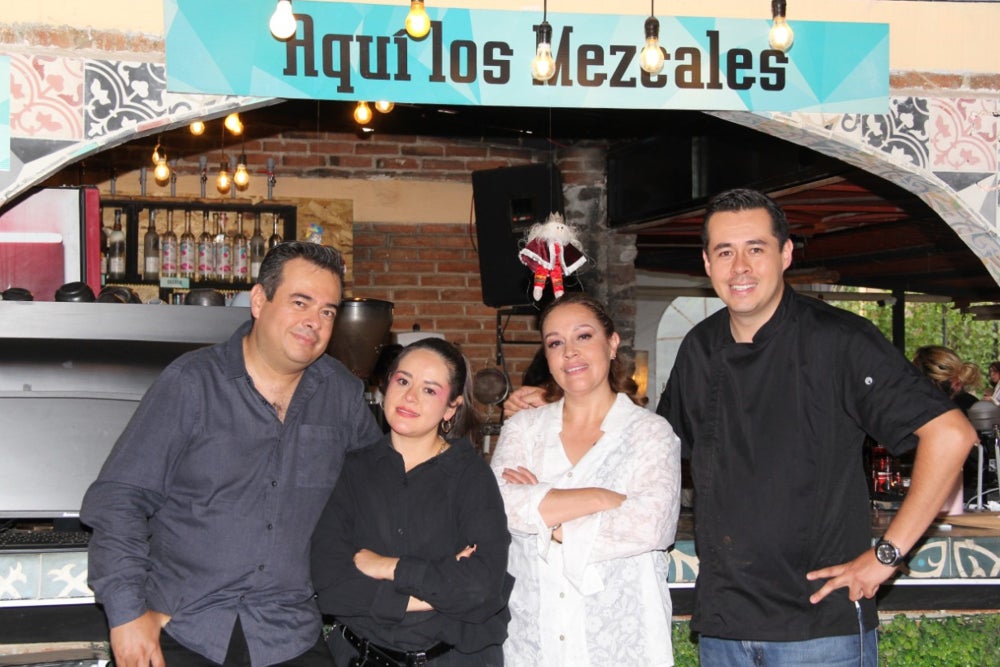 So, Rabbit on the Moon helps them pay for their mezcals by adding the raw materials, the work and all the inputs, such as transportation or firewood for the ovens. “ So they can really know how much it costs them to produce each liter of mezcal. From there we set a fair price, adding an average of 40% profit for them and that is what we pay them, ”explained Jesús.

Sánchez affirms that “a well-made traditional mezcal cannot cost less than 400 pesos per liter . If they sell it to you cheaper it is because perhaps it is already industrialized or the producer is underpaid and loses out ”.

Preserving its traditional essence and not distorting its values, the new challenge for Rabbit on the Moon

“My goal is not to bottle mezcal and sell it wholesale, ever, because it would lose the essence of what we are building. The importance of mezcal is not only in the drink itself, it is in the tradition, the culture and the hands of those who make it, ”said Jesús Sánchez.

The restaurant houses a boutique where you can buy all the varieties of mezcal from Conejo en la Luna . But also, they are betting on ecommerce with their own online store and offering their mezcals through Amazon , and they are about to enter other renowned virtual stores.

Now the challenge of Rabbit on the Moon is to meet the demand . "All the mezcaleros with whom I work are small producers, so there is a limitation in terms of production capacity."

They also have offers from businessmen to bring Rabbit on the Moon to Spain, Germany and Asia , among others. "Now my challenge is to reach this growth without distorting the essence of my business," says Jesús before taking a sip of his mezcal made in Morelia, Michoacán with maguey cupreata.

"Mezcal is not a drink, it is a whole culture," concluded the passionate entrepreneur.