By Supriyo Bose September 16, 2021
This story originally appeared on Zacks

U.S. telecom stocks mirrored the broader benchmark equity indices over the past week and witnessed a gradual downtrend due to an apparent policy paralysis, despite the best intentions of the government to spur a healthy growth momentum. The final passage of the $1.2 trillion infrastructure bill by the House appears to have hit a roadblock, as several progressive Democrats want the bill to be tied to the larger $3.5 trillion budget reconciliation bill that is facing massive backlash from both Republicans and Democrats. The infusion of federal funds to improve broadband infrastructure for greater access and deeper penetration in the underserved domestic markets is the need of the hour to bridge the digital divide. However, the uncertainty over the much sought-after infrastructure bill that focuses on affordability and low-cost service option has hard hit the industry.

Moreover, with the five-member FCC deadlocked with two Republican and two Democratic member representations, its implementation is likely to be delayed until the fifth member is nominated and confirmed. To add to the woes, an interim rule published by the U.S. Treasury Department has narrowed the broadband eligibility and jeopardized the President’s goal of delivering fast, affordable Internet to every American household. The rule prioritizes broadband in areas that have either slow or no connectivity and largely favors rural remote locations. However, several cities with broadband connectivity are also found to be lacking in faster Internet speed due to exponential growth in data demand and increasing work-from-home trend. This, in turn, could create a broad anomaly as sparsely populated areas currently lacking broadband could leapfrog certain urban areas in their Internet speeds if the Treasury goes forward with the purported rule.

Meanwhile, Democrat congressmen have introduced the “Device Access for Every American Act” to improve accessibility among low-income broadband consumers. The legislation pledges to offer a $400 voucher to low-income consumers to purchase an Internet access device by allotting $1 billion every year for five years to the project. Separately, in a concerted effort to improve data security and privacy, and prevent identity theft, the U.S. House Energy and Commerce Committee voted to provide FCC $1 billion fund to set up a bureau dedicated to these activities. The government is also reportedly aiming to ease diplomatic relations with Beijing that have worsened over recent times to improve bilateral trade, as several restrictions and economic sanctions were hurting operations of domestic firms. Whether Biden’s phone call with his counterpart in China will likely result in one-to-one meetings in the near future and benefit the overall industry remains to be seen.

Desroches reiterated that AT&T is focusing on core wireless businesses to maintain its leading market position, as the industry continues to benefit from a healthy uptick in demand amid the lingering coronavirus scare. The company is aiming to profitably increase its postpaid subscriber base, leveraging its network quality and market penetration capabilities.

2.     Juniper Networks, Inc. JNPR has augmented its AI-driven enterprise portfolio with the latest features to scale up operations and simplify network rollout. The portfolio enhancements are likely to offer greater insight and automation capabilities while increasing operational flexibility and efficiency of network operators.

The company aims to address the amplified network pressure with its EVPN-VXLAN campus fabric management tools that simplify wired, wireless, and WAN via a common cloud and AIOps engine. Leveraging the existing Juniper platform, the improved fabric offers a common operational framework and a single AI-driven support model where self-driving operations and predictive actions pre-empt problems before they arise.

3.     T-Mobile US, Inc. TMUS has announced that it will be launching the T-Mobile and Metro by T-Mobile brands in more than 2,300 Walmart stores and on Walmart.com. The move more than doubles the Bellevue, WA-based wireless carrier’s footprint at large national retailers.

Walmart stated that by adding T-Mobile and Metro by T-Mobile to its assortment, it is delivering the best products and services to its customers to help them save money and live better. Beginning Oct 18, anybody will be able to shop Metro by T-Mobile displays in select Walmart stores and through Walmart.com for smartphones and three options for unlimited monthly rate plans.

5.    Cambium Networks Corporation CMBM recently announced that it has collaborated with multiple enterprise-focused system integrator partners to equip Multi-Dwelling Units (MDU) and hospitality campuses with superior connectivity on the back of its avant-garde wireless solutions. These facilities capitalized on Cambium’s fixed wireless broadband, and Wi-Fi.

The company partnered with CEO Technologies to revamp the communication infrastructure of a campus of 22 buildings, which was previously functioning on an aging network. Per the network modernization initiative, Cambium leveraged its cnPilot e425 Wi-Fi access points (APs). The company’s advanced Wi-Fi access points have been specifically designed to address the demanding requirements of enterprises. 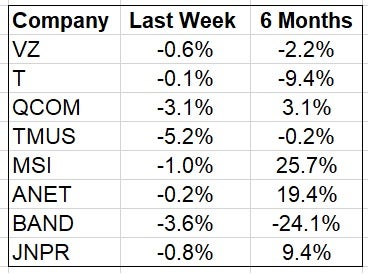 In the past five trading days, none of the stocks gained. T-Mobile declined the most with its stock falling 5.2%.

Over the past six months, Motorola has been the best performer with its stock appreciating 25.7%, while Bandwidth declined the most with its stock falling 24.1%.

Over the past six months, the Zacks Telecommunications Services industry has gained 8% and the S&P 500 has rallied 13.4%. 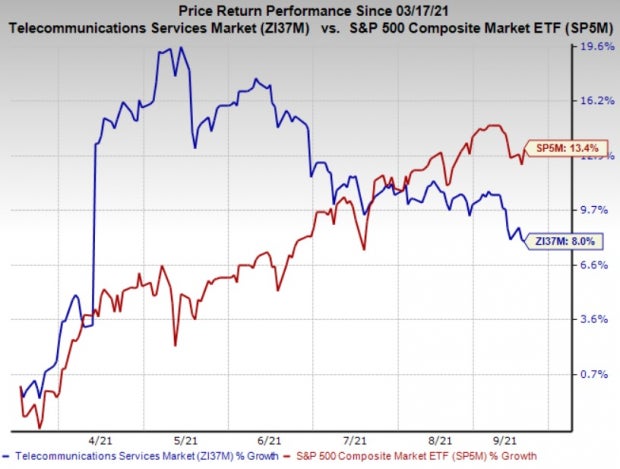 In addition to 5G deployments and product launches, all eyes will remain glued to how the administration implements key policy changes to safeguard the interests of the industry amid China’s dominance and the spread of the Delta variant of the coronavirus across the country.

6 Ways To Attract and Retain More Women in Manufacturing

Brent Crude Futures Hit $90 For The First Time Since 2014