Valero (VLO) is restarting its St. Charles and the Meraux refinery along the Mississippi river, which have a combined capacity of 475,000 bpd.

Valero Energy Corporation VLO is recommencing operations at two of its Louisiana refineries after hurricane Ida wiped out most of the state's oil processing last month.

The company closed the St. Charles and the Meraux refinery along the Mississippi river ahead of the storm’s landfall to avoid its catastrophic impacts. The two refineries have a combined capacity of 475,000 barrels per day (bpd).

About nine of the oil production refineries in the Gulf of Mexico were shut down as the massive storm had a significant impact on the energy supply. The storm removed at least 94% of offshore Gulf of Mexico oil and gas production along with causing catastrophic damages to Louisiana's power grid.

Other refineries such as Royal Dutch Shell plc’s (RDS.A) 250,000-bpd Norco refinery and Phillips 66's 250,000-bpd Alliance refinery in Belle Chasse remain closed due to extensive damage. The companies expect recovery measures to be difficult since the tropical storm Nicholas is expected to bring 5-10 inches of rain across portions of southern and central Louisiana.

On its part, Valero did not reveal whether its Louisiana facilities sustained any notable damages from the storm. The company is actively working in a safe and sustainable manner to resume operations and bring the state's refining capacity closer to pre-storm levels.

Headquartered in San Antonio, TX, Valero is a leading independent refiner and marketer of petroleum products in the United States.

Shares of the company have fared better than the industry in the past six months. The stock has declined 15.9% compared with the industry’s 17.3% fall. 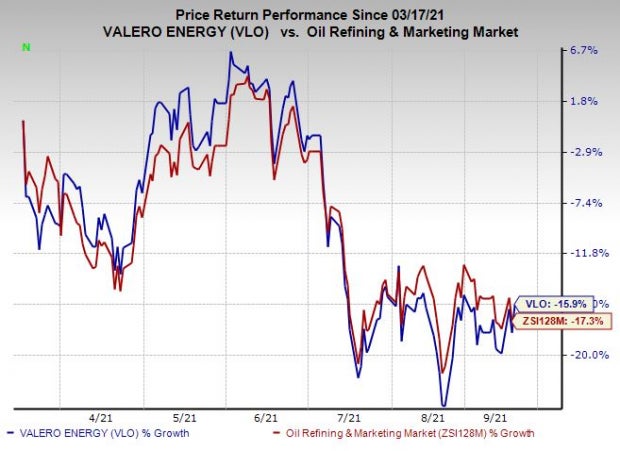 Valero currently has a Zack Rank #3 (Hold). You can see the complete list of today’s Zacks #1 Rank stocks here.