Shell (RDS.A) resumes production at its Perdido platform in the Gulf of Mexico as the platform's position in the westernmost deepwater Gulf made it hi...

Royal Dutch Shell plc (RDS.A) resumed oil production at its Perdido offshore platform in the western Gulf of Mexico after tropical storm Nicholas forced it to temporarily shut down operations.

This is the second major storm to threaten the U.S. Gulf region in recent months, bringing another blow to the energy industry. Hence, energy companies shut down production as storm Nicholas brought heavy rain and power outages to the oil facilities in the Gulf.

About 28% of U.S. Gulf of Mexico crude production remained offline due to the catastrophic impacts of hurricanes Ida and Nicholas. The company’s 250,000-bpd Norco refinery remains closed due to extensive damage caused by the previous storm. Hurricane Ida wiped out much of the U.S. Gulf offshore oil and gas production. Notably, no Texas refineries are known to have closed from Nicholas.

Unlike Hurricane Ida, Nicholas did not knock Gulf’s production offline as the storm made landfall along the Texas coastline. Most refineries in Texas were operating normally, while the utilities were restoring power to customers who lost electricity. However, the Perdido platform's position in the westernmost deepwater Gulf region made it highly exposed to Nicholas.

Shell had been waiting for downstream facilities, which suffered power outages, to resume operations prior to restoring production in Perdido. Williams Companies Inc. WMB cited that its pipeline and processing facilities were ready to receive natural gas from the Perdido offshore platform, following the resumption of operations.

Apart from the Perdido platform, Shell’s Appomattox, Enchilada/Salsa and Auger assets continue to increase production after hurricane Ida. The company will keep pipelines associated with its West Delta-143 offshore facility offline since damage assessments continue for those assets. The facility serves as a transfer station for the Ursa, Medusa, Mars A and Olympus production fields and platforms, which are also expected to remain closed.

Shell is one of the primary oil majors — a group of U.S. and Europe-based big energy multinationals. The company is fully integrated, as it participates in every aspect related to energy from oil production to refining and marketing.

Shares of the company have outperformed the industry in the past six months. The stock has declined 0.3% compared with the industry’s 4.3% fall. 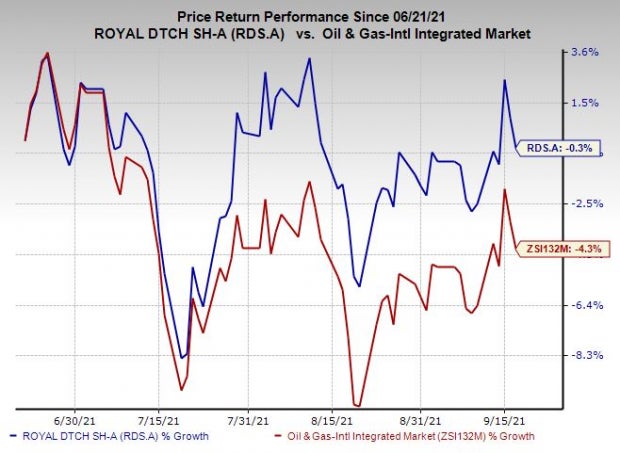 Zacks Rank & Other Stock to Consider

Some other top-ranked players in the energy space are Canadian Natural Resources Limited CNQ and Continental Resources, Inc. CLR, each currently sporting a Zacks Rank #1 (Strong Buy). You can see the complete list of today’s Zacks #1 Rank stocks here.