JPMorgan (JPM) is ready to launch the digital retail bank under the Chase brand in Britain starting next week.

JPMorgan JPM is finally ready to launch the digital retail bank Chase in Britain in the upcoming week. The Wall Street giant unveiled in January this year that it was planning to launch a digital bank in the U.K. in order to capitalize on the acceleration of the digital banking boom.

The new bank will be headquartered in London with a contact center in Edinburgh.

A spokesperson for JPMorgan confirmed that initially a smartphone app will be launched on Tuesday, which will offer only current accounts. Eventually, JPMorgan intends to provide savings as well as current accounts along with a wide range of banking services and loan products through the digital-only bank.

The head of JPMorgan international consumer division, Sanoke Viswanathan, stated, “This is a very big strategic commitment from the firm’s standpoint. We will spend hundreds of millions before we get to break-even and get to a place where this is a sustainable business, and we’re not in a rush.”

Viswanathan further mentioned that they plan to expand the Chase digital bank in Europe as well as Latin America over time.

In August 2020, it was reported that JPMorgan signed agreements with partners, including Amazon Web Services and 10x Future Technologies, a FinTech firm to provide cloud and digital banking infrastructure.

Amid plans of establishing a banking presence in the U.K., JPMorgan, earlier this year, acquired British robo-adviser Nutmeg.

While expanding in the U.K., JPMorgan is expected to face tough competition in the digital banking space. Several local FinTech players like Monzo Bank Ltd. and Starling Bank Ltd. have already garnered significant market share in the region, while large traditional banks, including HSBC Holdings HSBC and Barclays BCS, are looking to expand digital offerings.

Further, Goldman Sachs’ GS online-only bank Marcus — which began operating in the U.K. in 2018 and has more than 500,000 customers — poses a risk to JPMorgan’s expansion efforts.

Despite these hurdles, JPMorgan is expected to continue its efforts toward digitizing operations to better align with customer needs. The efforts are expected to support the company’s profitability and boost market share amid a low interest rate environment.

So far this year, shares of the company have gained 24.1% compared with 27.5% growth recorded by the industry. 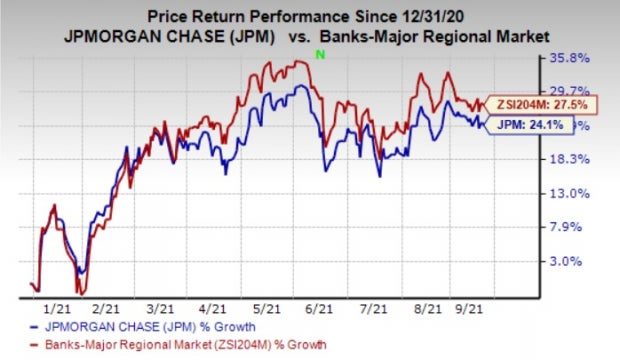