By Maharathi Basu September 21, 2021
This story originally appeared on Zacks

The airline stocks in the United States have had an unimpressive run on the bourses of late, mainly due to the rapid spread of the highly contagious Delta variant of COVID-19. On account of the spike in COVID-19 cases and subsequent hospitalization induced by the deadly infection, shares of leading airlines, namely Delta Air Lines DAL, American Airlines AAL, United Airlines UAL, Southwest Airlines LUV, Alaska Air Group ALK and JetBlue Airways JBLU have declined 10.1%, 8%, 17.9%, 11%,11.3% and 11.1%, respectively, over the past three months. 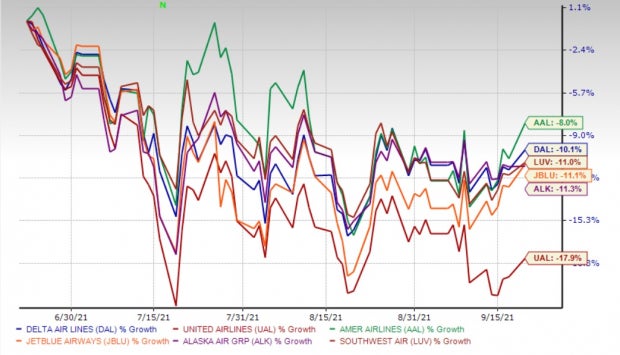 However, the above Delta-strain-hit airlines received encouraging news yesterday following an announcement from the White House. According to the update, travel restrictions on air passengers from countries like China, India, Britain and other European nations into the United States will be eased from November this year.

Per White House COVID-19 coordinator Jeff Zients, foreign nationals will have to be fully vaccinated when they fly to the United States in November. They will have to demonstrate proof of vaccination before boarding. Further, the travelers have to test negative for the coronavirus, which they have to undergo within three days of their flight. Zients ruled out the need to quarantine for the fully-vaccinated passengers.

Additionally, rules are toughened for the unvaccinated Americans. Per an Associated Press report, they need to get tested negative within a day before returning to the United States. Also, they will have to be tested after arrival.

The relaxation of travel restrictions on foreigners from November will remove the ban, which is in place for 18 months, on flyers from entering the United States. On implementation, the new policy will boost international revenues, which has been hugely depressed by the pandemic so far, for carriers on the back of increased traffic.

Per the above report, Airlines for America’s data announced that such travel in August 2021 comprised only 46% of the August 2019 levels. Moreover, arrivals in August by non-U.S. citizens in the country were only 36% of the level witnessed two years ago.

Against this backdrop, the decision to ease travel restrictions for flying into the United States was warmly welcomed by the airlines. Per Delta {currently a Zacks Rank #3 (Hold) player} spokesman Morgan Durrant, “We are optimistic this important decision will allow for the continued economic recovery both in the U.S. and abroad and the reunification of families who have been separated for more than 18 months.”

The above decision drove the shares of U.S. airlines on Sep 20. The announcement also found favor with the British carriers like Virgin Atlantic and British Airways.

That the announcement got wide acceptance can be gauged from the northward movement of the airline stocks, which came despite the overall stock market experiencing a dismal day. As a result of the sell-off, the S&P 500, Nasdaq and Dow dipped 1.7%, 2.2% and 1.8%, respectively, on Sep 20.