Skillz Stock Is Back to Base, So Let the Games Resume

InvestorPlace - Stock Market News, Stock Advice & Trading Tips The mega-spike hoopla is dead for SKLZ stock. It is back to base and ready for stro...

By Nicolas Chahine September 21, 2021
This story originally appeared on InvestorPlace

After a 2% drop in the indices on Monday, it’s now much easier to find stocks to buy on dips. Today we focus on one that was already in trouble before the most recent debacle. Skillz (NYSE:SKLZ) stock is 75% off of its all-time highs. But in all fairness, the rally that took it to its highs was 250% and way too fast.

You’ve heard the saying of easy come easy go, well this is what they mean.

The 2021 February top came under unrealistic expectations. At that time, the Reddit phenomena was in full swing. SKLZ stock and about a dozen like it were moving fast with their leader GameStop (NYSE:GME) kicking up dust storms.

There was no way to justify those lunatic spikes back then, so what went up came crashing down.

Although it was very painful to those who bought it above $35 per share, they must have seen some of it coming. It was a bearish report questioning the company’s accounting that may have triggered the correction, but that’s not the current source of malaise.

Recently SKLZ rallied twice ferociously 75% and 100%, and both ended quickly. The bulls in this stock have definitely run out of steam. Therein lies the opportunity from here, because it’s back to base.

SKLZ Stock Is Much Leaner Now 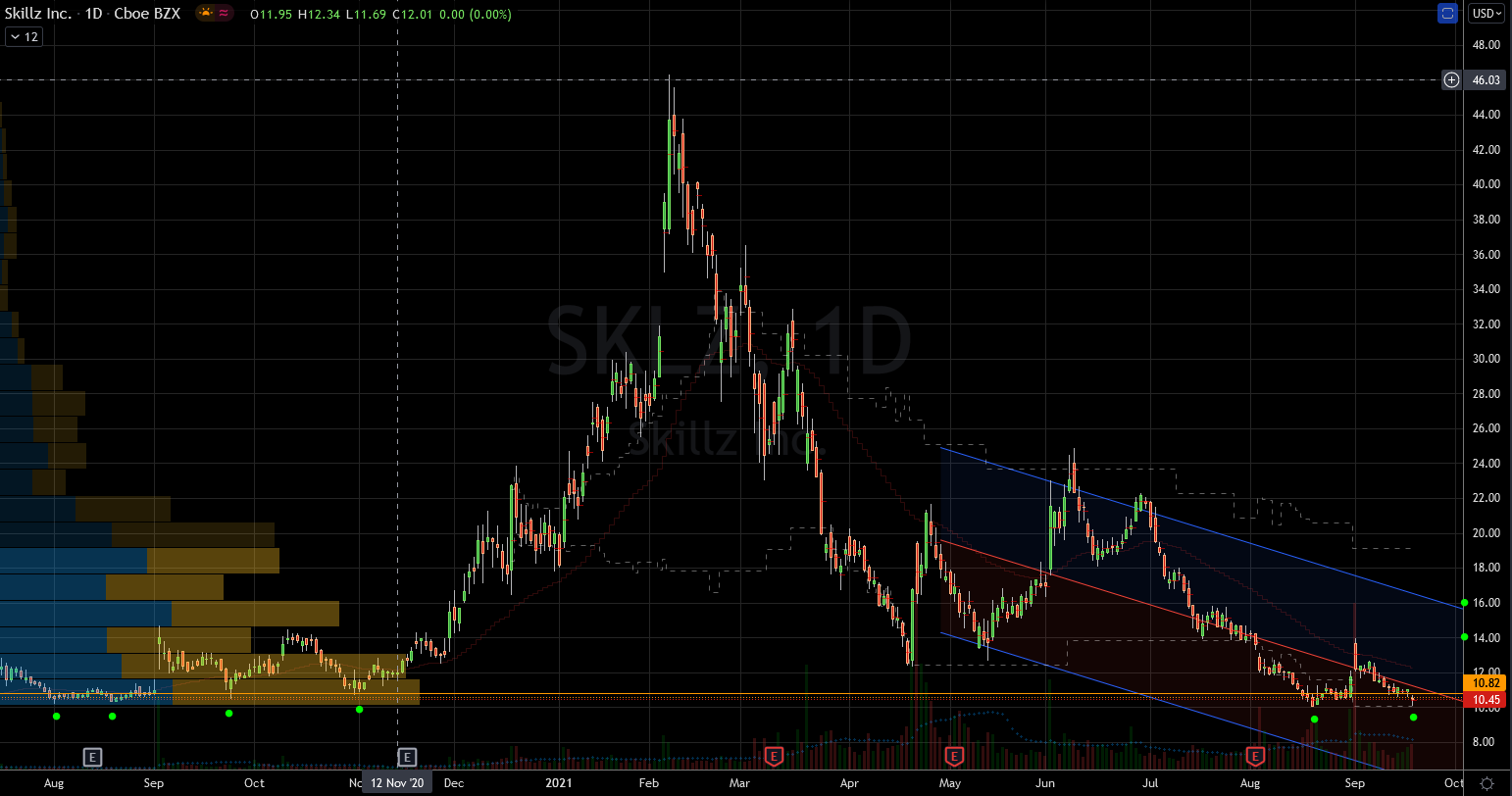 All of the froth that started last November has come out of the stock. In fact, it now sits near its all time lows and close to its August bottom. Normally when stocks fall into prior bounce levels, they find support. The caveat is that if its fails, then the bears would start another leg lower.

This is where investors have to make the decision if this is a trade or an investment. Traders usually stop out if the benchmark level for their thesis fails. In this case it’s a nice round number of $10 per share. Investors, on the other hand, may decide to manage their expectations and only take a partial entry now. If the stock fails into lower-lows, they have the option to add in order to manage the risk.

The opportunity that is present is legit. Skillz operates in a exciting arena and it’s still small. This leaves a lot of room for potential growth. There are a few recent hiccups especially from China regulators, but overall gaming is a hot topic.

Over time, there is more upside potential in SKLZ stock then downside risk.

The Opportunity Is Still Speculative

Of course, this is a highly speculative ticker just because of the lack of history on Wall Street. Furthermore, and even if sentiment on it was high, I should knock it down a notch – especially this week. There is a Federal Reserve event on Wednesday and they could announce changes in the QE program. Experts are expecting them to discuss the taper process. If that’s the case, then this correction was in anticipation of it.

I contend that this is not the case. If Monday’s equity rout was from a taper tantrum, the U.S. dollar would have spiked. Bond and gold prices would have fallen as well. Instead, we had a rally in bonds and gold and the dollar fell.

I suspect that this tizzy was from traders booking some profits ahead of a potentially binary event.

Fed Is Not an Enemy Yet

So far, the Fed has been extremely accommodative to Wall Street. It would be unusual if this is the week they actually flip the switch to bearish. If Fed Chair Jerome Powell has aspirations for a second term, he’s not going to ruin it now. He tried it in 2018 by throwing a wrench in the Wall Street cogs, and it crashed.

My bet is that he says nothing new, and that this too shall pass.

The bulls are mathematically still in charge, so they are likely to buy-the-dip one more time. The rally should resume and even to new all-time highs. Up until yesterday, the S&P 500 was within an earshot of its high watermark. Now it has become somewhat of a legitimate dip.

Furthermore, the small caps have fallen almost 7% from high-to-low this month alone. While this is not a disaster, it could suggest that the bears are making progress. My assumption is that they will fail to break the bull this year.

If so, then SKLZ stock will recover. However,  I’m not looking for an immediate moonshot to all-time highs. There will be resistance near $14 and $16 per share to name two problematic spots.

The post Skillz Stock Is Back to Base, So Let the Games Resume appeared first on InvestorPlace.