By Patrick Sanders September 22, 2021
This story originally appeared on InvestorPlace

I’m not an aggressive investor in cryptocurrencies, but I know a good thing when I see one. And I’m convinced that while Bitcoin (CCC:BTC-USD) gets the lion’s share of attention, the No. 2 altcoin Ethereum (CCC:ETH-USD) is the far superior choice between the two. 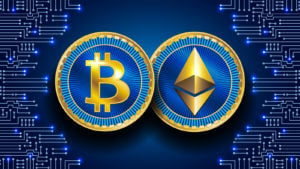 Don’t get me wrong. I’m not disparaging Bitcoin, which has proven to be a solid investment. In fact, I think there’s a bullish case for Bitcoin to continue its outsized growth.

But Ethereum’s returns over the past year or so dwarf its crypto rival. More importantly, I believe the ongoing Ethereum 2.0 upgrade is going to turbocharge the price of ETH in the next five years. The current price around $3,000 is going to seem like a bargain by the time this upgrade cycle is done.

Ethereum As an Investment

For a few years now, I’ve allocated about 5% of my portfolio to real estate via real estate investment trusts (REITs). But I wasn’t thrilled with the returns, and the crypto space was really starting to heat up. So, I took my REIT money and put it into Ethereum (and a little in Bitcoin as well).

I bought ETH at roughly $230 per coin in May 2020. By the time I exited last month to finance a major purchase, Ethereum was up to $3,200, giving me a return of nearly 1,300%. Those are the kind of investing wins that you think about for a long time. And it’s much better than my Bitcoin return, which was a still-impressive gain of 470%.

Since I sold in mid-August, ETH is down just a bit, but holding steady at just over $3,000. I don’t think that’s a major red flag, though. Cryptocurrencies are always going to be volatile, which is why I wouldn’t ever put more than 5% of my portfolio into them.

As I said, I’m not an aggressive crypto investor. But I believe that, if you’re positioned correctly, cryptocurrencies have a useful place in any portfolio.

The Long-Awaited Upgrade to Ethereum 2.0

There’s been a lot written about Ethereum 2.0, both among InvestorPlace writers and elsewhere. The crux of it is that Ethereum’s launch in 2015 used a proof-of-work (PoW) consensus protocol that is similar to Bitcoin. Proof-of-work is designed to stave off economic attacks, while allowing secure computer nodes to agree on any information published on the network.

There have been lots of complaints, however, that PoW is too slow and has excessive fees that make it unfeasible for Ethereum over the long run. It also uses a lot of energy. Ethereum 2.0 and its change from PoW to proof-of-stake (PoS) is designed to solve those problems.

According to FXEmpire, the upgrade will have three key improvements:

On that final point, Ethereum co-founder Vitalik Buterin says that ETH’s energy consumption will be cut by more than 1,000x by switching to PoS.

Of course, this is not an overnight achievement. Ethereum 2.0 involves a three-pronged upgrade. The first, Beacon Chain, is already live. Later this year or early in 2022, the Beacon Chain will be combined into the Ethereum mainnet. And sometime next year, Shard Chains will split the network to allow for more capacity in storing data and processing transactions.

It’s a lot of work, but I think it will pay off for investors.

The Bottom Line on Ethereum

I’m a firm believer that we’re just seeing the beginning of Ethereum’s move higher. Ethereum 2.0 and the change to a PoS consensus are going to make Ethereum more attractive for mainstream use.

Investors may be able to use volatility in the crypto markets to their advantage. My best-case scenario is to wait for fluctuations and crypto bears to push ETH to $2,500 before I re-establish my position. If that doesn’t happen, I’ll start using the dollar-cost averaging method in December to rejoin the Ethereum party.

On the date of publication, Patrick Sanders did not have (either directly or indirectly) any positions in the securities mentioned in this article. The opinions expressed in this article are those of the writer, subject to the InvestorPlace.com Publishing Guidelines.

Patrick Sanders is a freelance writer and editor in Maryland, and from 2015 to 2019 was head of the investment advice section at U.S. News & World Report. Follow him on Twitter at @1patricksanders.