Summary There is a change in Cummins Inc. (NYSE:CMI) (CMI or the Group) business direction from diesel engines to electric and hybrid powertrains. Thi...

From 2018, CMI amended the way it described its business in its Form 10k.

I would conclude that CMI's business direction has changed. It has not only positioned itself to cater to different energy sources ie from diesel and natural gas to electric and hybrid. But it has also broadened its product mix from engines to powertrains. Both of these set CMI on a different growth trajectory.

Over the past few years, its acquisitions were focused on strengthening its expertise in these new fields. At the same time, from 2012 CMI began acquiring the shares of the North American distributors that it did not own so that currently it owns them.

CMI is fundamentally sound with a good profit track record. It has performed well relative to its peers. These are traits that will enable it to be profitable in the new business direction.

I believe that the market price does not reflect these prospects. At the current price of around USD 228 per share (23 Sep 2021). there is a sufficient margin of safety.

The details to support my rationale are presented below. I have organized them in line with the sequence of the rationale.

In the first half of FYE 2021, the Group achieved revenue growth of 38 % and net income growth of 53 % compared to those for the same period last year. 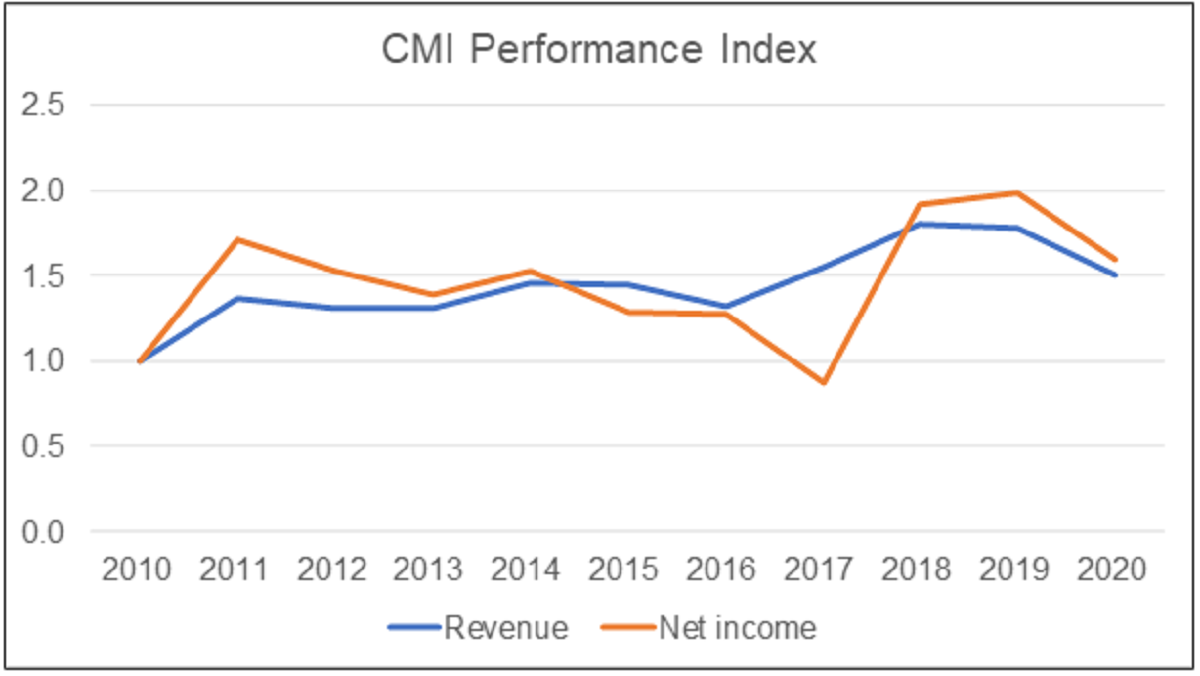 Good Returns Where It Matters

A powertrain is an assembly of every component that thrusts a vehicle into motion. It includes engine, transmission, driveshaft, axles, and differential. A powertrain system is one of the main components of a vehicle. It would appear that to serve the powertrain market, CMI would have to rely on its Engine and Components segments.

The Engine and Components segments were the larger contributors to the Group EBITDA over the past few years as can be seen from the chart. The strong performance by these 2 segments augurs well for CMI entry into the powertrain business. 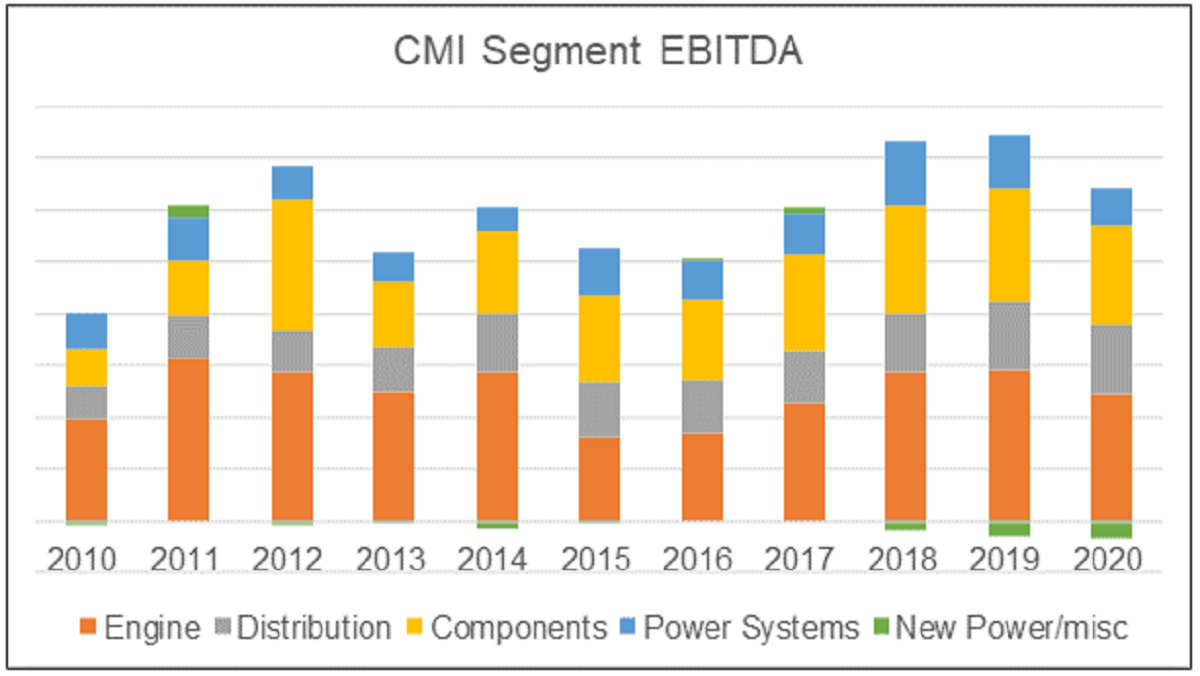 In 2013 CMI announced that it would acquire all its partially owned US and Canadian distributors over the next 3 to 5 years. CMI actually spent about USD 428 million between 2012 and 2016 to acquire 15 distributors.

This is of course a back-of-envelope calculation. But it showed that the Group gained about USD 235 million per year from the acquisitions. The amount spend was equal to about 2 years' payback. No doubt the post-acquisition performance is also due to organic growth. But it does point that it was a beneficial exercise.

Performed Better Than Its Peers

I also compared CMI Revenue growth and ROA with those of its peers - Borg Warner, Caterpillar, Donaldson, Eaton, Navistar, Deere, Paccar and Grainger.

The table summarized the results. I would rate CMI performance as better than average.

As of the end of 4 July 2021, the Group had a Total Capital Employed (TCE) of USD 13.18 billion. Shareholder’s fund accounted for 60 % of the TCE with the balance from minority interests and debt (including leases).

About 67 % of the TCE has been deployed for the operations. About 19 % of the TCE is in cash compared to the electrical equipment industry average of 5 % (Source: Damodaran Jan 2021. 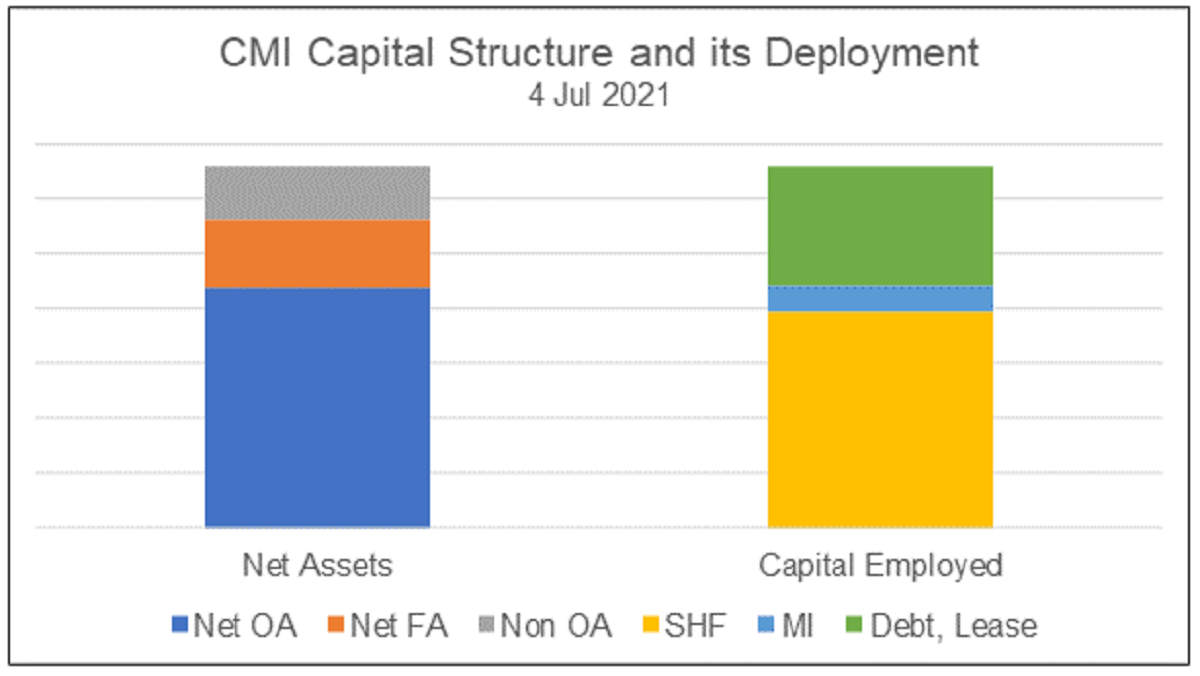 CMI had a book debt to TCE ratio of 33 % compared to the US electrical equipment industry average of 49 % (Industry source: Damodaran Jan 2021.)

But looking at the debt ratio for the Group can be misleading due to its large cash position. When you look at the net debt (debt less cash), the picture is that the Group is still very low geared. CMI Net Debt to equity was 0.1 at the end of 2020. As of mid-2021, it was 0.2

The analyses point to 2 shifts in CMI business direction

This is not to suggest that the diesel engine is in any immediate danger of being disrupted. There is still room for steady growth. However, the bigger market seemed to be in powertrains as illustrated in the chart below.

b) Fortune Business Insights. If you are interested, I have a more detailed analysis of the generator market in my article “Is Generac Holdings a growth trap”

I valued CMI on the following bases.

The other key assumptions in my valuation were:

The results of the valuation are tabulated as well as charted below. 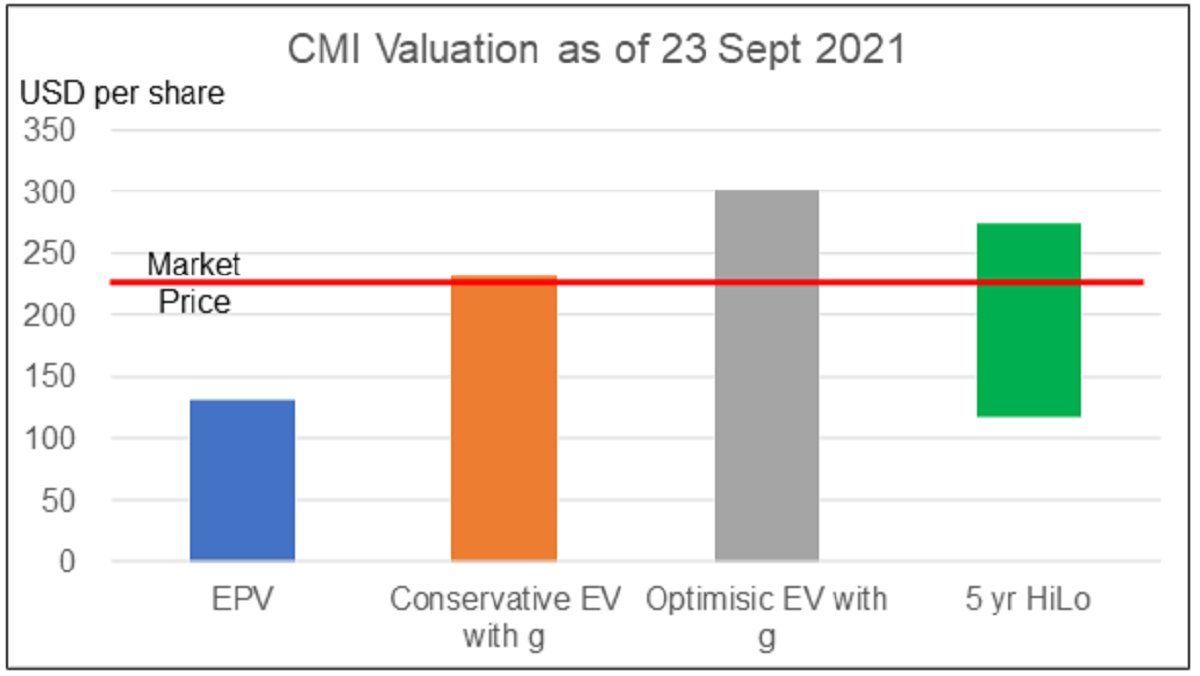 The current price is above the EPV. Thus, the margin of safety would have to come from a valuation assuming growth.

My valuation shows that:

The above analysis showed that CMI is a buying opportunity only if growth under the Optimistic scenario can be justified. I believe that they are:

There are of course some concerns about the growth assumptions.

The global growth in diesel engines, power generators, or even auto powertrains was projected to be around 4 % to 5 % CAGR. This must mean that CMI would gain market share with a 7.4 % growth rate.

While there is potential higher growth in electric products, it would be at the expense of diesel products. I am assuming that despite the cannibalization, the Group would have overall growth.

In spite of these concerns, the 32 % margin of safety should provide some room for error.

The article is from H.C. Eu who blogs at Investing for Value. He is a self-taught value investor and has been investing in Bursa Malaysia and SGX companies for more than 15 years. His value investment experience has been enhanced by both his Board experiences and his contacts with controlling shareholders of many Bursa Malaysia’s listed companies. These have given him a unique opportunity to be able to analyse and value companies differently from other research houses. If you enjoyed this piece, you can find similar pieces and other value investing tips in his blog.