The Executive Selection: The Top 10 Pilot Watches In 2021

Following their invention in 1904, pilot watches have consistently been among the most sought-after timepieces by horologists around the world.

Following their invention in 1904, pilot watches have consistently been among the most sought-after timepieces by horologists around the world. However, given the wealth of choices in the market today, choosing the right one to adorn your wrist can be a pretty difficult endeavor. But worry not- the team at Watchbox, the world’s leading e-commerce platform to buy, sell, and trade luxury watches, have put together this list from which you can choose the ideal pilot watch that fits you and your particular taste:

1. THE MOST POPULAR: ROLEX GMT-MASTER II 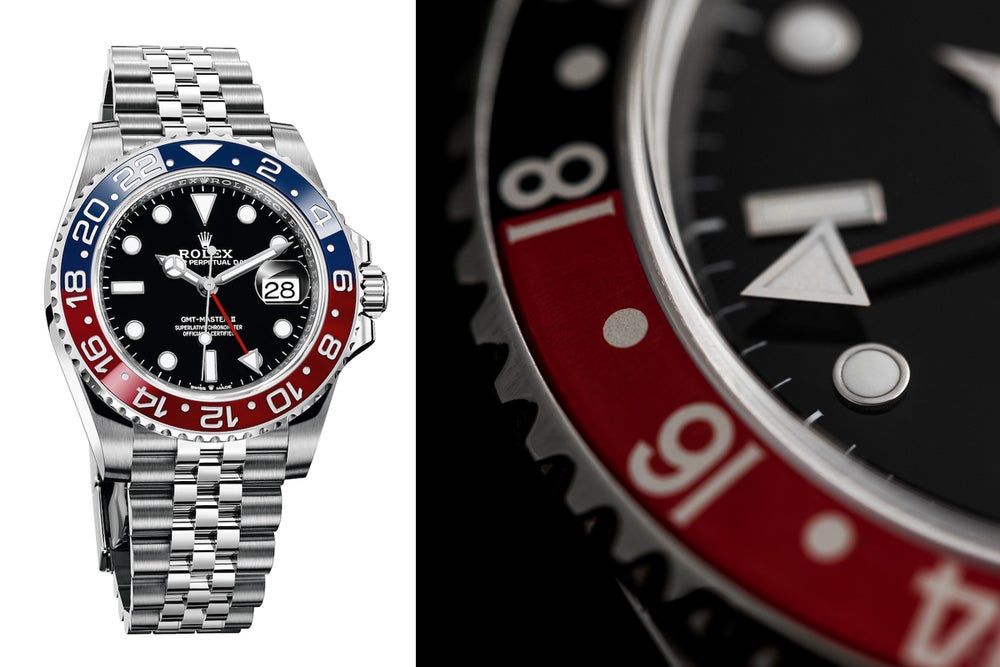 Does this legendary traveler need any further introduction? Launched in 1955, the Oyster Perpetual GMT-Master was the official watch of Pan American World Airways, more commonly known as Pan Am– at that time the largest intercontinental airline in the US. There have been ongoing improvements to the GMT-Master, delivering ever better technical performance. In 1982, Rolex introduced a new caliber, allowing the hours hand to be adjusted separately from the 24-hour and minutes hands: the GMT-Master II. Now powered by the Cal. 3285, it has become an icon, in particular thanks to its two-tone "Pepsi" dial. 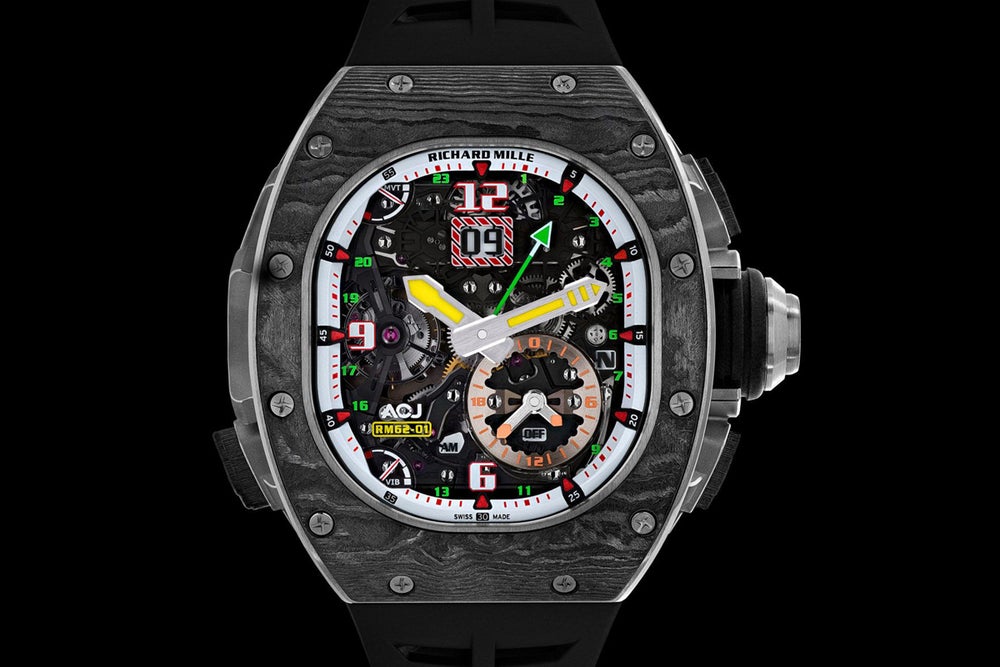 The brand has recently unveiled its second achievement in partnership with Airbus Corporate Jets. In what you might call a vibrant tribute to air travel, the new RM 62-01 includes a vibrating alarm. The "Tourbillon Vibrating Alarm," to give it its full name, features a silent alarm. The mechanism consists in a rotor that revolves at very high speed on its own central axis at up to 90 revolutions per second (5,400 rpm). This extremely fast rotation generates vibration that can be felt on the wrist. A little extravagance that will cost you CHF1.3 million.

3. THE MOST ICONIC: BREITLING NAVITIMER 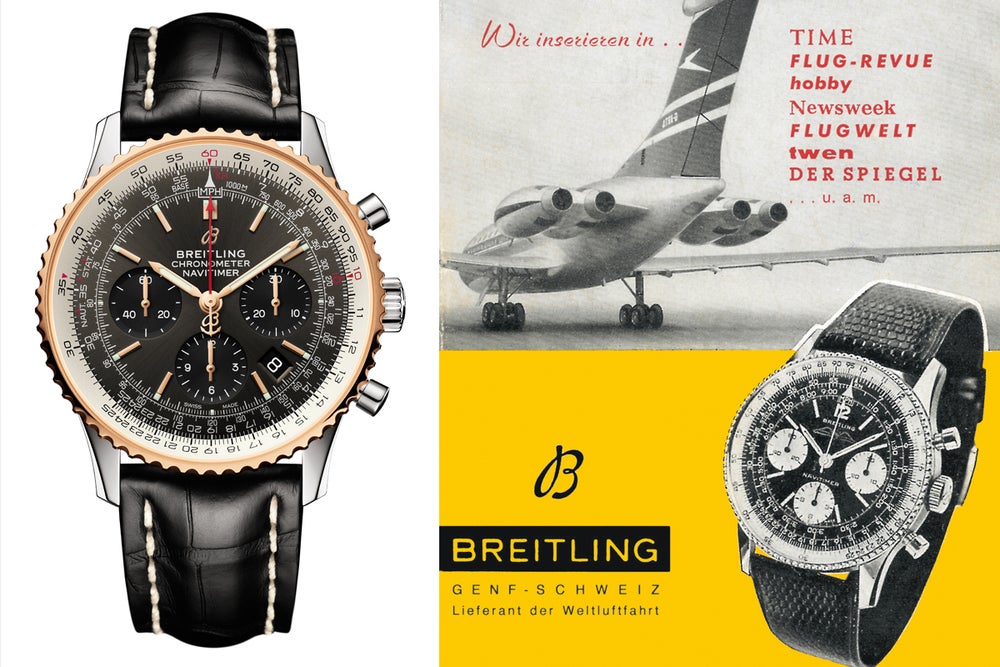 The Navitimer is an inescapable icon of aviation watchmaking; it has successfully adapted to various technical developments over the years, thereby establishing itself as one of the most reliable mechanical chronographs, complete with its acclaimed bezel and large, stainless steel case. The name belies its vocation, being a contraction of the words "Navigation" and "Timer." It was first launched in 1952; aided by the slide rule associated with its Venus 176 chronograph, and by the Valjoux 72 movement, it has become a legend. 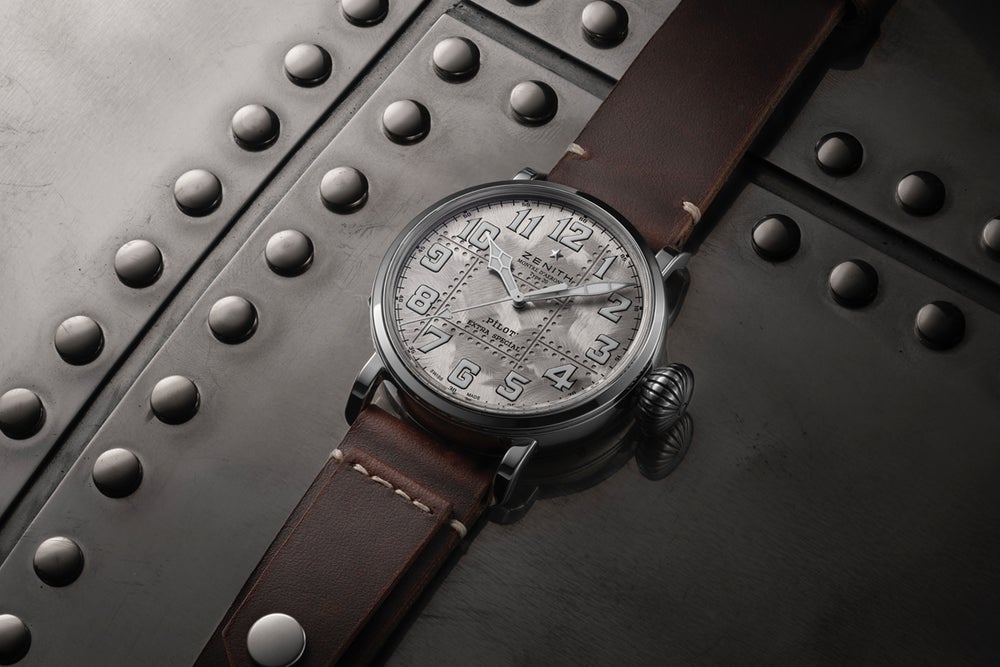 The Le Locle-based manufacture was one of the first to make the original aesthetic appearance of pilot watches fashionable once again, with broad cathedral hands and a very vintage look in an oversized case, corresponding to the standards of the days when pocket movements were first shifted onto the wrist. That said, it’s the brand’s more recent Zenith Type 20 Extra Special, with a dial resembling an aluminum fuselage, that’s become established as the most creative of present-day pilot watches.

5. THE MOST HISTORIC: CARTIER SANTOS 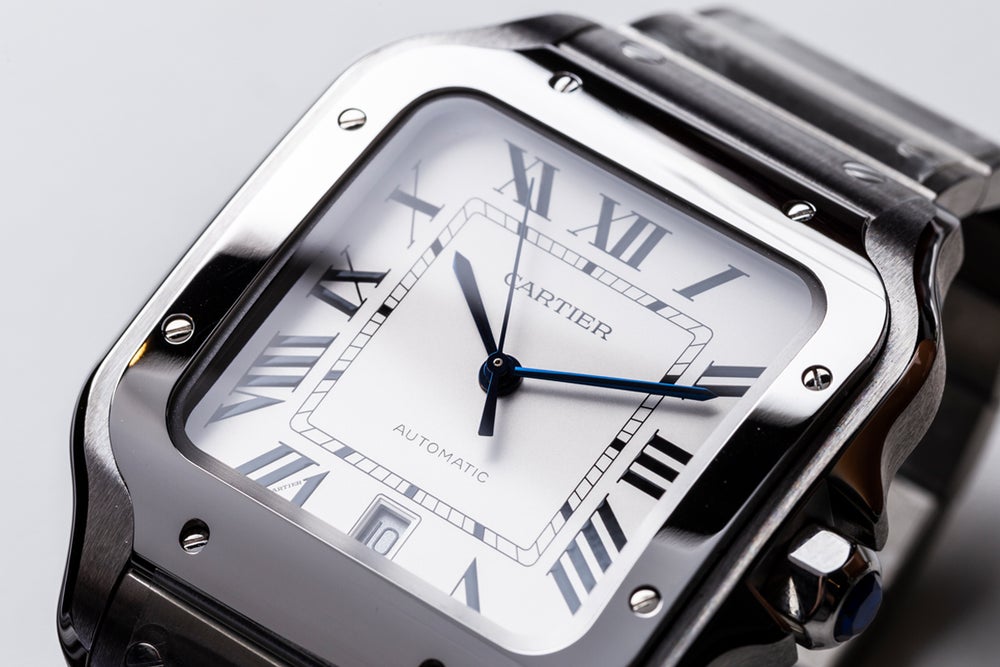 The Santos in Cartier Santos refers to Santos Dumont, the pilot, encapsulating the involvement of Louis Cartier in the design of his aviator friend’s watch back in 1904, at a time when only pocket watches existed. It’s a visionary creation, with a crazy, aesthetic appearance due to its broad, square dial, Roman numerals, and visible screws. The perfect accessory for flying with elegance and style!

6. THE MOST READABLE: IWC BIG PILOT 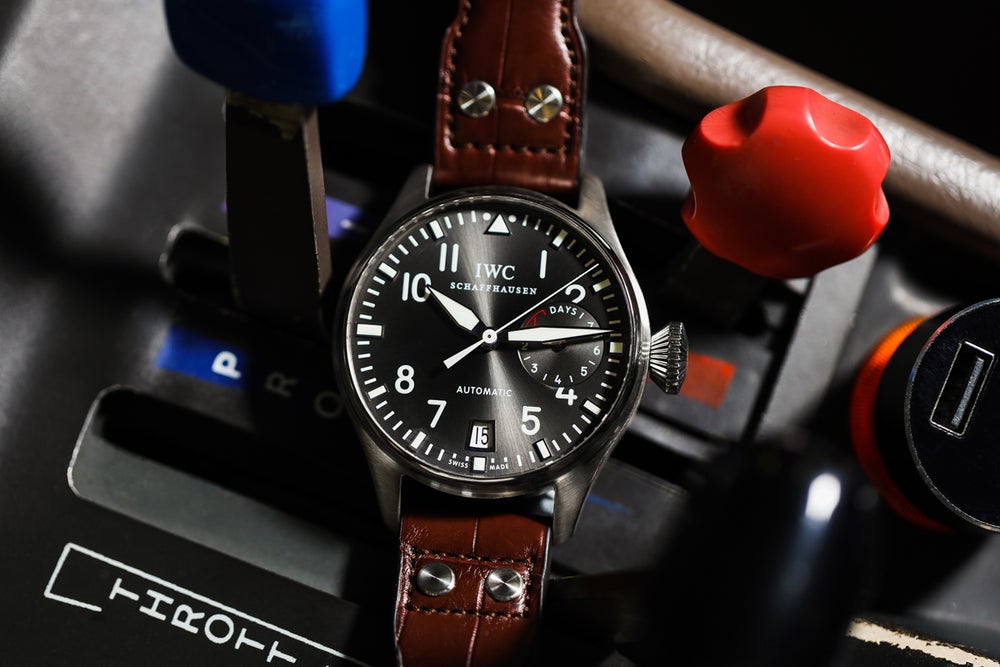 If you have a whole collection called Pilot Watches, it’s difficult to go wrong. From the three-hand Big Pilot to the Quantième Perpétuel via 1940 vintage revivals, IWC offers a wide range of pilot watches to suit all styles, built on 150 years’ worth of expertise. The Big Pilot is a timeless watch that’s perfectly readable thanks to its sober, no-nonsense appearance.

7. THE MOST FAMOUS: BREGUET TYPE XXI 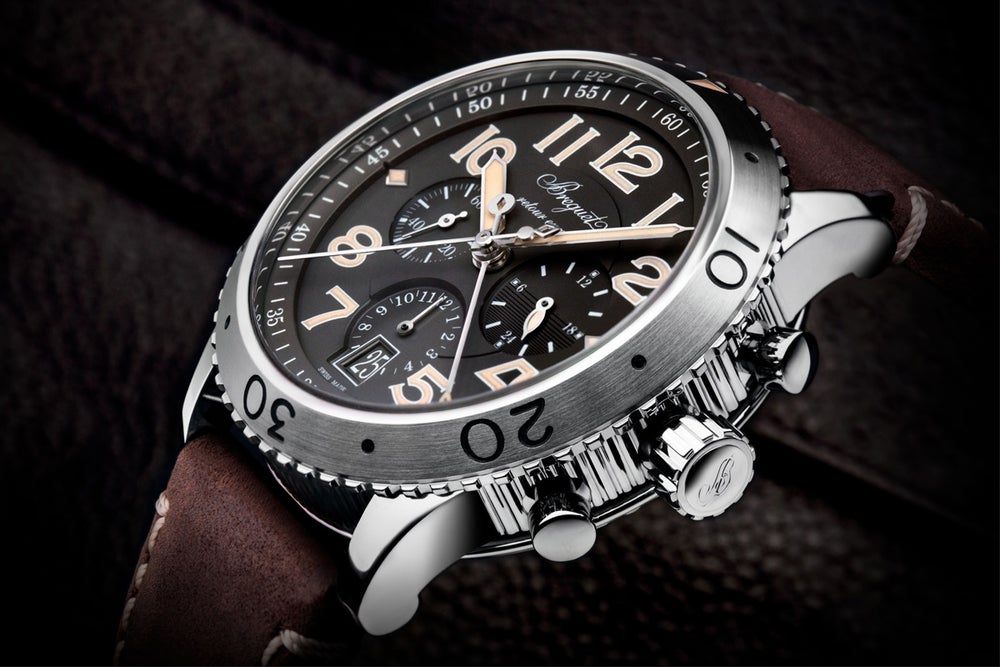 As well as its pilot watches, the Breguet family has been historically involved in aviation through the construction of some of the most famous aircraft of the early 20th century, including the Type I, Deux Ponts, and Breguet 14. When you buy a Breguet Type XXI, you’re not simply wearing an aviator watch; you’re carrying a piece of aviation history on your wrist.

8. THE MOST AFFORDABLE: LONGINES SPIRIT 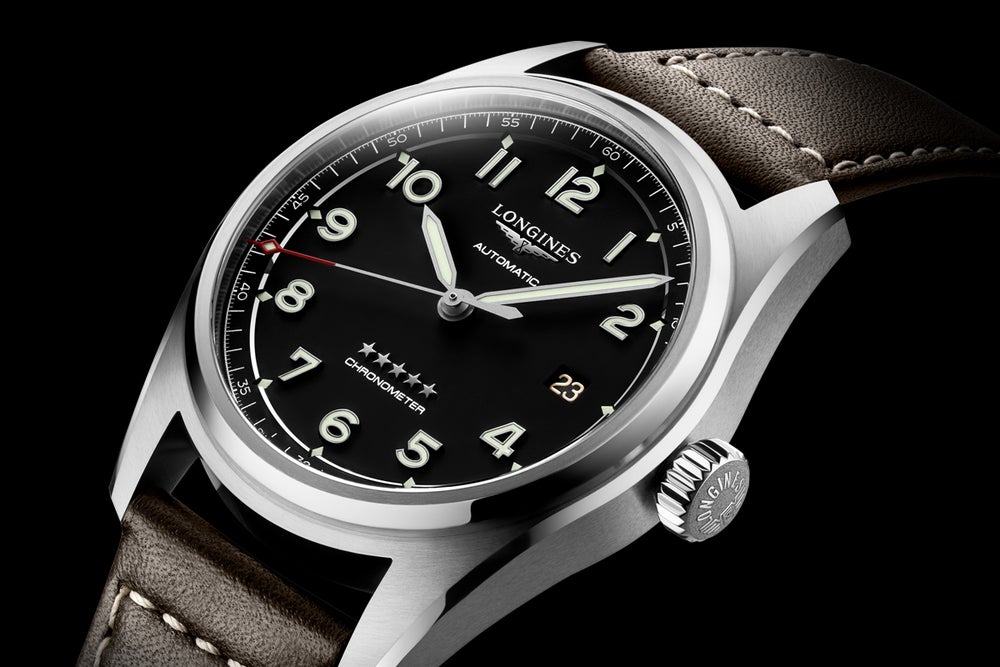 Can you really take delight in a pilot watch without breaking the bank? The answer is yes, with Longines. Longines accompanied female aviation legend Amelia Earhart back in the 1920s, followed later by Howard Hughes and Elinor Smith. The Longines Spirit collection pays tribute to them all.

9. THE MOST ELEGANT: PATEK PHILIPPE CALATRAVA 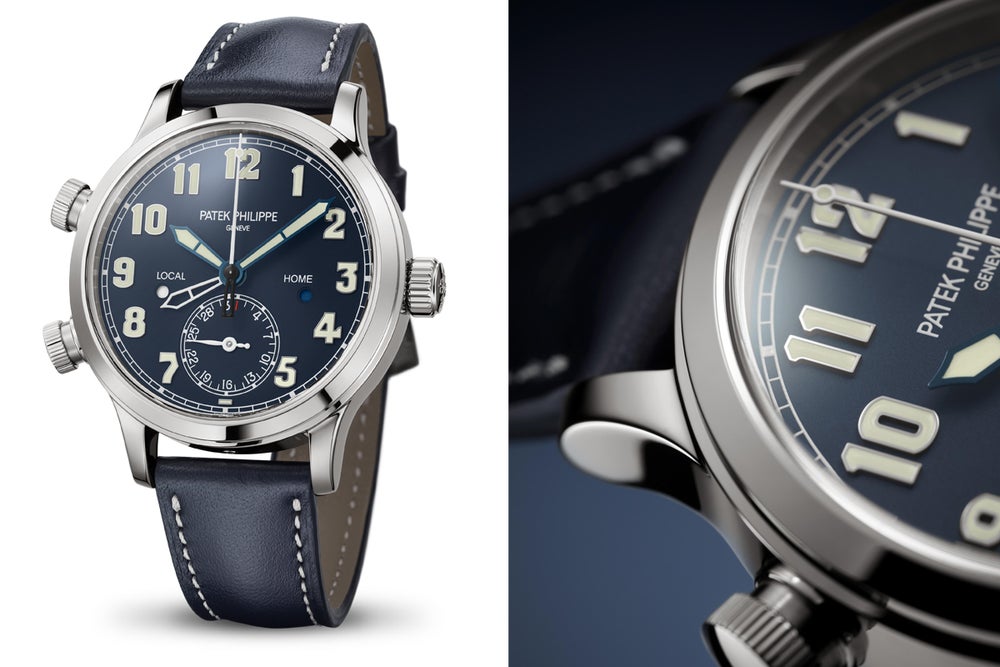 Patek Philippe is not best-known for its pilot watches, but it does offer some fine specimens. One such piece is the Calatrava Pilot Travel Time 7234, featuring a dual time band, broad, luminous hands, and a decidedly 1930s spirit. A masterpiece– and one of the very rare pilot watches to measure only 37.5 millimetres. 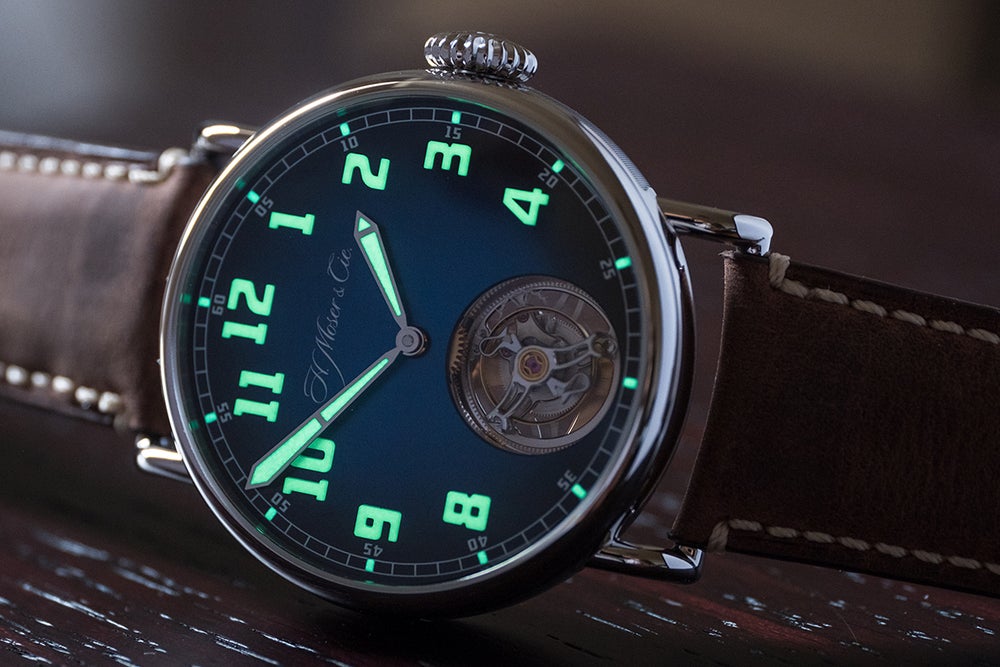 H. Moser & Cie’s aviation pedigree is as near to non-existent as makes no difference. That hasn’t stopped fine watchmaking’s most off-the-wall brand from riffing on the category with its rip-roaring Heritage Tourbillon Funky Blue Steel, probably the only aviation-themed watch to be made fully in-house– and feature a tourbillon. A tourbillon-free version is also available.

WatchBox is the world’s leading platform for the buying, selling, and trading of pre-owned luxury watches, fueled by technology, innovation, and unmatched global experience in the high-end watch market. As the trusted destination for watch enthusiasts worldwide, Watchbox has offices in the United States, Hong Kong, Switzerland, Singapore, and in the UAE in partnership with Ahmed Seddiqi and Sons. Watchbox's UAE boutique is located at Gate Avenue in Dubai International Financial Centre; contact them on +971-54-9962509.

These 6 Small Steps Will Help You Achieve Your Biggest Goals