Regulatory and pipeline updates from bigwigs like Biogen (BIIB) and Novavax (NVAX) have been some of the key highlights in the biotech sector during t...

It has been a busy week for the biotech sector with loads of regulatory and pipeline updates. Acquisitions are back in full swing in the sector. These apart, updates on vaccines for COVID-19 continue to grab the limelight as the world at large is in dire need of the same to combat the contagion.

Recap of the Week’s Most Important Stories:

Acceleron Up on Rumors of Takeover: Shares of Acceleron Pharma Inc. XLRN have jumped significantly since Friday on rumors of a potential takeover by a pharma giant.  Per a Bloomberg report, the company is in advanced discussions to be acquired by a pharma/biotech bigwig for $11 billion or $180 per share. Acceleron’s promising pipeline candidate — sotatercept — which is being evaluated for the treatment of pulmonary arterial hypertension (PAH), is most likely the key attractive point for the companies interested. Acceleron is executing on its phase III development of the same following positive results from the phase II study, PULSAR. The candidate is being developed in collaboration with Bristol Myers.  This apart, the company earns royalties on sales of Reblozyl (luspatercept-aamt), which has been developed as part of its global collaboration with Bristol Myers.  Reblozyl is approved for the treatment of anemia in certain blood disorders. The PAH space represents potential and hence Acceleron is likely to be in the spotlight.

Biogen, Eisai Submit Application for AD Drug: Biogen BIIB and partner Eisai announced that the latter has initiated a rolling submission of a biologics license application (BLA) for pipeline candidate, lecanemab (BAN2401).  The BLA is seeking approval for the candidate as a treatment for early Alzheimer’s disease (AD) under an accelerated pathway in the United States. Lecanemab is an investigational anti-amyloid beta (Aβ) protofibril antibody. The BLA is primarily supported by clinical, biomarker, and safety data from a phase IIb study evaluating lecanemab in patients with early AD and confirmed amyloid pathology. Data from the study has shown that treatment with the candidate led to a high degree of decline in amyloid beta plaque, a key criterion for the measurement of disease improvement in AD patients. The study data also showed that treatment with lecanemab resulted in a consistent reduction of clinical decline across several clinical endpoints.

Regulatory Update on Amgen’s Repatha : Amgen AMGN announced that the FDA has approved Repatha (evolocumab) as an adjunct to diet and other low-density lipoprotein cholesterol (LDL-C)-lowering therapies for the treatment of pediatric patients aged 10 years and older with heterozygous familial hypercholesterolemia (HeFH) to reduce LDL-C. The approval was based on encouraging data from the phase IIIb HAUSER-RCT evaluating the safety and efficacy of Repatha in pediatric patients. Data showed that monthly treatment with Repatha reduced LDL-C by mean 38% from baseline compared to placebo, meeting its primary endpoint. Repatha also received the FDA approval as an adjunct to other LDL-C lowering therapies for the treatment of homozygous familial hypercholesterolemia (HoFH) for younger pediatric patients. Repatha was already approved for treating HoFH patients aged 13 and older and is now available as a treatment for patients aged 10 and older.

Pipeline Update From Biohaven: Biohaven Pharmaceutical BHVN announced that its pipeline candidate verdiperstat did not meet the primary and secondary endpoints in a late-stage study in multiple system atrophy (MSA). Verdiperstat is an investigational first-in-class, potent, selective, brain-penetrant, and irreversible myeloperoxidase (MPO) enzyme inhibitor that Biohaven is developing for the treatment of neurodegenerative diseases.  Results from the phase III study showed that verdiperstat did not statistically differentiate from placebo on the prespecified primary efficacy measure, nor on the key secondary efficacy measures.

Update on Novavax Vaccine: Novavax NVAX and partner Serum Institute of India Pvt. Ltd. announced a regulatory submission to the World Health Organization (“WHO”) for emergency use listing (EUL) of Novavax's recombinant nanoparticle protein-based COVID-19 vaccine candidate with Matrix-M adjuvant, NVX-CoV2373. Shares surged on the news. NVX-CoV2373 is a protein-based vaccine candidate engineered from the genetic sequence of the first strain of SARS-CoV-2. Novavax and Serum Institute have completed the submission of modules required by regulatory agencies in India, Indonesia, and the Philippines for the initiation of a review of the vaccine, including preclinical, clinical, and chemistry, manufacturing, and controls data. The submission to WHO is based on the companies' regulatory submission to the Drugs Controller General of India.  The listing, if allowed, will enable the company to supply its COVID-19 vaccine to nations participating in the COVAX facility. The COVAX facility aims to provide equitable access to COVID-19 vaccines across low- and lower-middle-income countries.

Incyte Collaborates With Syndax: Incyte INCY announced a worldwide collaboration and license agreement with Syndax Pharmaceuticals, Inc. to develop and commercialize the latter’s axatilimab, an anti-CSF-1R monoclonal antibody. The two companies plan to expand the development of axatilimab in chronic graft-versus-host disease (cGVHD) with additional monotherapy and combination trials planned in 2022.  Per the terms, Incyte will lead global commercial activities for axatilimab across all indications. Both the companies will share profits equally in the United States and Syndax will receive double-digit royalties on sales outside the country. Syndax will retain the option to co-promote axatilimab for any approved indications in the United States. In exchange, Syndax will receive an upfront payment of $117 million and a $35 million equity investment, which will be purchased at $24.62 per share, a 30% premium to the volume-weighted average price over the 10 days prior to Sep 24, 2021. Syndax is also entitled to receive up to an additional $450 million in milestone payments.

The Nasdaq Biotechnology Index has lost 4.32% in the past five trading sessions. Among the biotech giants, Moderna has lost 11.48% during the period. Over the past six months, shares of Moderna have soared 211.3%. (See the last biotech stock roundup here: Biotech Stock Roundup: Regulatory Updates From BIIB, BMY, EXEL, Setback for VRCA). 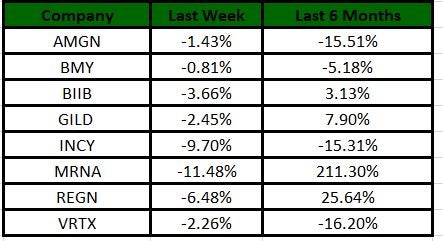 What's Next in Biotech?

Twilio (TWLO) Outpaces Stock Market Gains: What You Should Know