Reata (RETA) confirms submission of an NDA seeking approval for omaveloxolone to the FDA in the first quarter of 2022, following the completion of its...

Reata Pharmaceuticals, Inc. RETA announced that it has completed its previously requested pre-new drug application (NDA) meeting with the FDA related to its Friedreich’s ataxia (“FA”) candidate, omaveloxolone. The company affirmed its plan to submit an NDA for omaveloxolone in the first quarter of 2022, following the completion of the pre-NDA meet.

The pre-NDA meeting was requested by the company to discuss the content of the potential omaveloxolone NDA submission. Although the company is planning to seek standard approval for the candidate, the FDA has indicated that the approval pathway can be determined only after the regulatory submission. However, the FDA has allowed the company to submit data from certain nonclinical and clinical studies, following a potential approval of omaveloxolone for FA.

The confirmation of an NDA submission for omaveloxolone by the company following the meeting implies that Reata is not required to conduct a second pivotal study on the candidate as requested by the FDA last year. The FDA had previously stated that data from a single pivotal study was not sufficient to support an NDA filing for the candidate.  A new study would have significantly delayed potential approval for the candidate and increased operating expenses for the company. The company may get an approval for omaveloxolone at most by 2023 under current circumstances. However, any mishap during the review period will delay the approval.

Shares of Reata are down 18.7% so far this year compared with the industry’s 5.8% decrease. 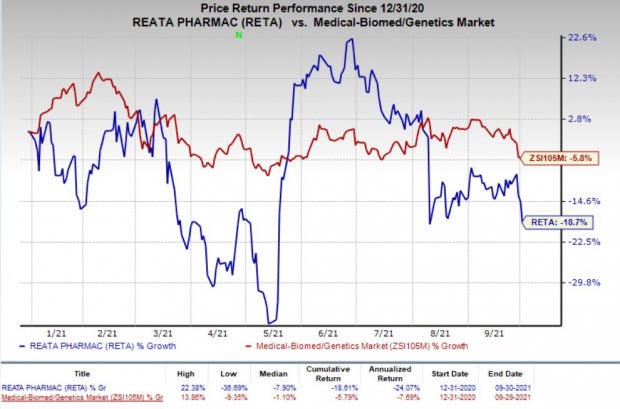 Reata has successfully completed the pivotal MOXIe study on its omaveloxolone as a potential treatment for FA in 2019. Data showed statistically significant improvement in mFARS (a measure of FA disease progression) compared to placebo after 48 weeks of treatment. The company also successfully completed a baseline-controlled study (crossover study) and additional exploratory analyses for additional data requested by the FDA previously. With the successful completion of the pre-NDA meeting with the FDA, the company will finally be able to file the much-awaited NDA

The company’s NDA seeking approval for another lead candidate, bardoxolone methyl, as a potential treatment for patients with chronic kidney disease (“CKD”) caused by the Alport syndrome is under review with the FDA. A decision related to the potential approval of the bardoxolone NDA is expected by Feb 25, 2022.

However, the FDA informed the company about four “significant clinical and statistical review issues” in the NDA in August. The company needs to address the issues with follow-up submission to the NDA. Moreover, the FDA will also conduct an Advisory Committee meeting likely in December this year. The follow-up submissions and any potential negative outcome of advisory meeting will likely delay the approval.

Avid Biosciences’ earnings per share estimates have increased from 21 cents to 24 cents for 2021 and from 38 cents to 39 cents for 2022 in the past 30 days. The company delivered an earnings surprise of 223.33%, on average, in the last four quarters. The stock has surged 87% so far this year.