Washington Federal (WAFD) agrees to pay a civil money penalty of $2.5 million to the OCC for its previously disclosed Consent Order for AML/BSA defici...

Washington Federal, Inc. WAFD has agreed to pay a civil money penalty of $2.5 million to the Office of the Comptroller of the Currency (“OCC”) in relation to its February 2018 Consent Order for Anti-Money Laundering and Bank Secrecy Act (“AML/BSA”) deficiencies.

The president and CEO of WaFd Bank, Brent Beardall, stated, “WaFd Bank is committed to building and maintaining an effective AML/BSA program and appreciates the opportunity to continue working with the OCC to achieve that goal.”

In April 2017, Washington Federal entered an agreement to acquire Anchor Bancorp in an all-stock transaction. In September 2017, the companies amended the merger’s termination date from Dec 31, 2017, to Jun 30, 2018, because of the identification of some faults with respect to procedures, systems and processes of Washington Federal’s BSA program.

However, on Jul 17, 2018, the companies decided to terminate the deal. Also, Washington Federal had said that it would not pursue acquisitions or branch expansions until its BSA program had improved.

Thus, the payment of the civil money penalty is a milestone in the resolution of the Consent Order.

So far this year, shares of Washington Federal have gained 33.3% compared with 43.1% growth recorded by the industry. 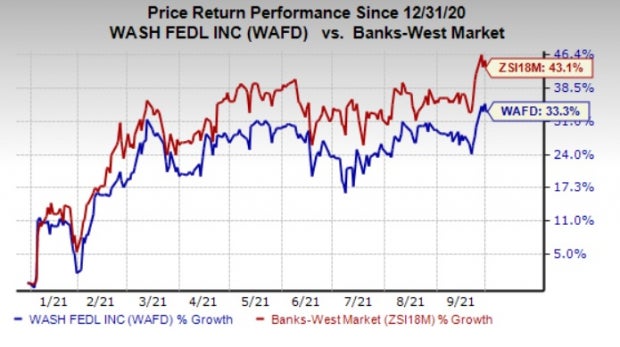 Several finance companies continue to encounter legal hassles and are charged with huge sums of money for business malpractices.

Charles Schwab SCHW has been slapped with a class-action lawsuit over violations of its fiduciary duty by placing its own interest before the protection of its clients through the bank’s robo-adviser Schwab Intelligent Portfolios’ cash sweep program. The case, filed in the U.S. District Court in Northern California, also accused the company of breach of contract and the violation of state laws.

Mitsubishi UFJ Financial Group’s MUFG U.S. banking unit, MUFG Union Bank NA, was slapped with a cease-and-desist order by the OCC over its unsound technological practices. The regulator detected that the bank engaged in “unsafe or unsound practices” linked with technology and operational risk management. According to the order, the bank was also in non-conformity with certain security guidelines.

Despite this, an agreement was entered by U.S. Bancorp USB and Mitsubishi, wherein U.S. Bancorp has agreed to acquire MUFG Union Bank’s core retail banking operations for $8 billion in a bid to boost its presence on the West Coast.

Chico's (CHS) Surges 9.1%: Is This an Indication of Further Gains?

Chico's (CHS) Surges 9.1%: Is This an Indication of Further Gains?