CIT Group Inc. CIT and First Citizens BancShares, Inc. FCNCA have agreed to extend their merger agreement from Oct 15, 2021, to Mar 1, 2022. In October 2020, the companies announced a merger agreement, which will lead to the creation of the 20th largest bank in the United States in terms of assets.

In July 2021, the proposed transaction received approval from the Federal Deposit Insurance Corporation. The Office of the North Carolina Commissioner of Banks also consented to the transaction. The deal has also received shareholder approval.

Action by the Federal Reserve is the only remaining regulatory approval required to complete the merger, and both parties are committed to seeking approval.

It will result in enhanced scale, improve profitability and boost shareholder value. The combined company will have more than $100 billion in assets and approximately $80 billion in deposits.

At the time of deal announcement, it was agreed that shareholders of CIT Group will get 0.0620 shares of First Citizens’ common stock for each of their own shares held. First Citizens’ shareholders will own 61% of the combined firm and the remaining 39% will be owned by CIT Group’s stockholders.

Pro forma, the deal is expected to result in combined non-interest expense savings of 10% or $250 million (fully phased-in). Merger-related costs are expected to be $445 million.

Notably, the combined firm, which will be headquartered in Raleigh, NC, will operate under the First Citizens name.

So far this year, shares of CIT Group have gained 44.7%, while that of First Citizens have rallied 46.8%. 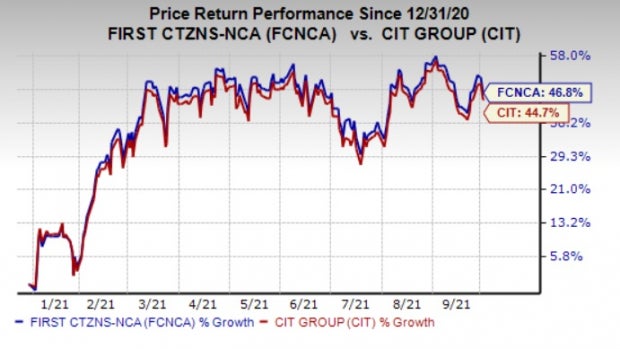 At present, several banks are moving toward consolidation to dodge the heightened costs of investments in technology and counter lower rates in a bid to remain competitive. In an effort to diversify revenues, Valley National Bancorp VLY has signed a deal to acquire Bank Leumi Le-Israel B.M.’s U.S. banking arm — Bank Leumi USA — for $1.15 billion.