Reasons to Hold on to Veeva Systems (VEEV) Stock For Now

Investors continue to be optimistic about Veeva Systems (VEEV) on its slew of product launches and robust product adoptions.

Veeva Systems Inc. VEEV is well poised for growth in the coming quarters, backed by its robust product adoption. A solid performance in the second quarter of fiscal 2022 and a slew of product launches also buoy optimism on the stock. However, foreign exchange instability and a tough competitive landscape are major downsides.

The renowned provider of cloud-based software applications and data solutions for the life sciences industry has a market capitalization of $44.21 billion. The company projects 18.2% growth for the next five years and expects to witness continued improvements in its business. Veeva Systems surpassed the Zacks Consensus Estimates in all the trailing four quarters, delivering an earnings surprise of 13.85%, on average. 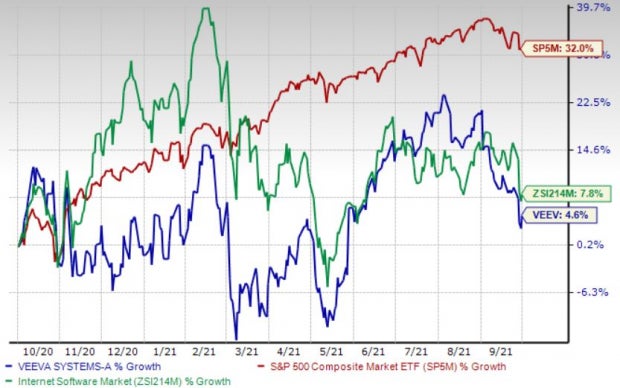 Robust Product Adoption: Veeva Systems has been registering solid uptake for its products over the past few months. The company, in September, announced that global medical products company ConvaTec has selected Veeva Vault CDMS to provide electronic data capture, coding and data cleaning for their upcoming study on the detection of wound infections. The same month, Veeva Systems announced that Emmes (a global full-service clinical research organization) is standardizing on Veeva Development Cloud applications throughout functional areas in order to achieve better speed and compliance.

In August, Veeva Systems had announced that the Veeva Vault Clinical Operations Suite was selected by B. Braun SE with the aim of updating study management and payments to partner sites.

Strong Q2 Results: Veeva Systems’ better-than-expected results in second-quarter fiscal 2022 instill confidence on the stock. Both of the company’s segments performed impressively during the quarter. The company continues to benefit from its flagship Vault platform, which is encouraging. Revenue uptick in Veeva Commercial Cloud with 21 new Veeva customer relationship management (“CRM”) customer wins and good traction with Veeva CRM add-ons (Crossix, and Veeva Link) look impressive. Strength in Veeva Systems’ data business and Veeva OpenData raises our optimism. Expansion of both margins also bodes well. A raised guidance for the fiscal year is a major positive.

Forex Woes: Veeva Systems derives a major share of its revenues from international operations. Some of its international agreements provide for payments and the majority of its local costs being denominated in local currencies. As the company continues to expand its operations in countries outside the United States, an increasing proportion of its revenues and expenditures in the future may be denominated in foreign currencies. Fluctuations in the value of the U.S. dollar versus foreign currencies may impact its operating results.

Veeva Systems has been witnessing an upward estimate revision trend for 2022. Over the past 90 days, the Zacks Consensus Estimate for its earnings per share has moved 1.7% north to $3.56.

The Zacks Consensus Estimate for the company's third-quarter fiscal 2022 revenues is pegged at $464.9 million, suggesting a 23.2% rise from the year-ago reported number.

IDEXX’s long-term earnings growth rate is estimated at 19.9%. It currently has a Zacks Rank #2.