3 Stocks to Buy While Investor Confidence Is Shaky

By Nicolas Chahine September 30, 2021
This story originally appeared on InvestorPlace

The scoreboard was green yesterday for the S&P 500 and the Dow, but the markets felt bearish. This was perhaps because the buyers let an overnight rally slip away from them. Since last week, sentiment has soured severely on Wall Street. The uneasiness has created opportunities to find stocks to buy on the cheap.

Investors are now hesitant, though not for any particular reason. If you believe the headlines, there are a thousand topics to fret, but none alone are a deal breaker. Some experts believe that it’s the “taper” news that is causing the selling. If that’s the case, then it shall pass because this is still a friendly Fed. The taper is not an event but a process. It should last for at least another nine months, maybe ten. After that, the Fed is unlikely to hike rates until 2023.

The exodus of two of the Fed’s top officials could be a good thing, because they are hawks. This is the opportunity for the administration to replace them with doves. This could extend the start of rate hikes even further out in time.

The current uncertainty is more about sentiment than actual facts. Companies are not going to make less money because the 10-year yield is up a bit. We’ve seen markets freak out about the opposite when bond prices run away.

Sentiment is fickle, so it isn’t a sustainable thesis for shorting stocks. Therefore, I am more optimistic than bearish on the state of the economy. That’s why today we look for stocks to buy on the dip instead of panic selling.

Here are 3 stocks to buy while investor confidence is shaky:

I spend hours every week setting notification alerts on stock levels that matter. By yesterday, I had more than 30 stocks to buy because they hit interesting prices. On the flip side, this is not a time to be super brave. To do that investors simply take only partial positions to relieve the itch of doing something big. I would much rather miss out on upside, than to get in too soon and hold losses. 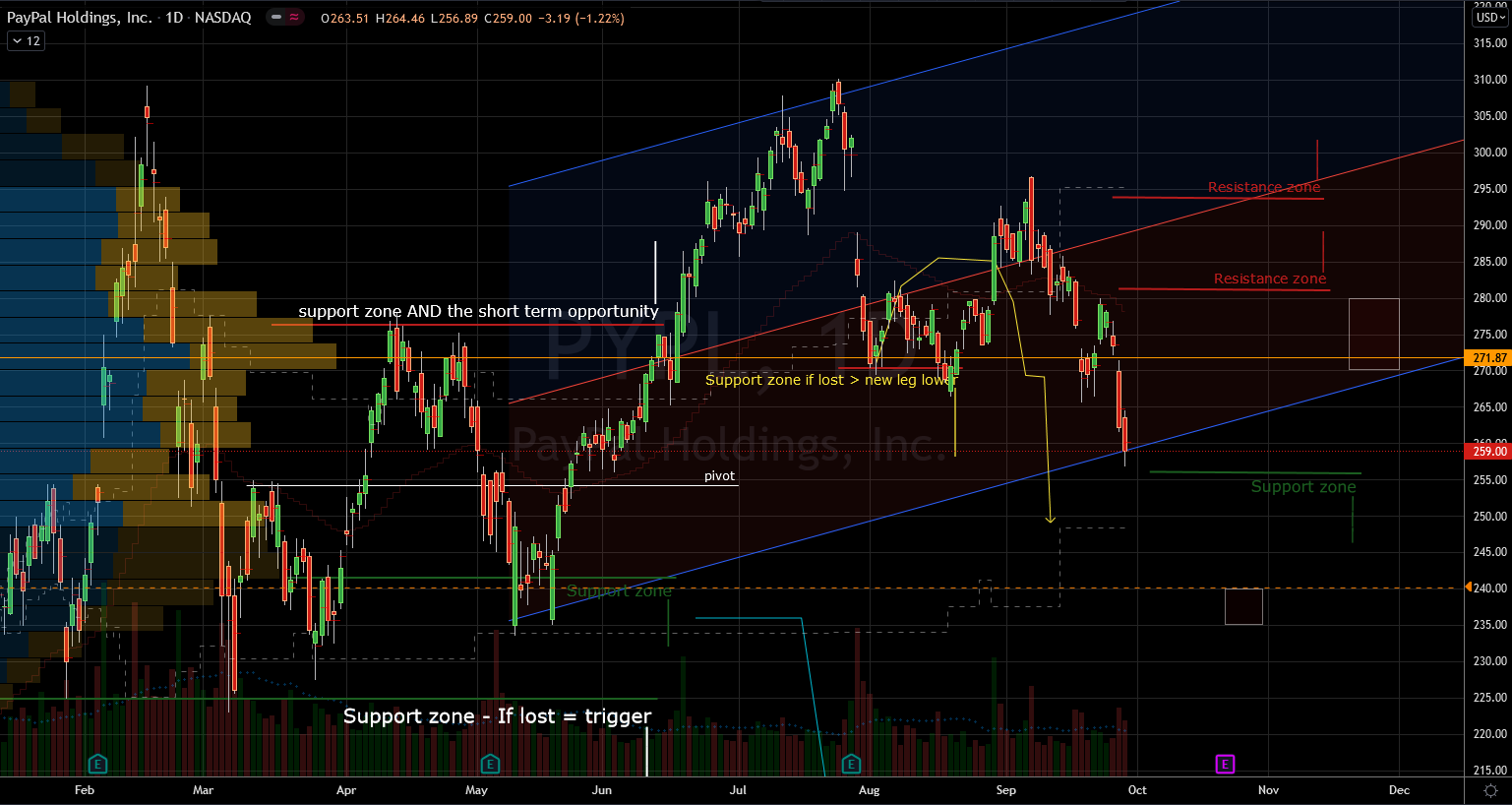 Fintech has been a hot topic lately. Perhaps this is a byproduct of the pandemic. The world has been using more and more electronic transactions for decades. But last year things came to a screeching halt, so we needed digital solutions ASAP. Now companies are feverishly finding ways to get on board. Financial tech companies like Square (NYSE:SQ) and PayPal have place themselves in the right spot for this.

This recent acceleration and trend benefits these stocks tremendously. They have come a long way from being the new kid on the block. They now lead the old dogs like Visa (NYSE:V) and MasterCard (NYSE:MA) with innovation. PYPL stock has skidded lately, correcting 17% from high to low. It is approaching a prior support zone, so I anticipate it will soon find footing.

However PYPL risks establishing a double top. If that happens it would embolden the bears to accelerate selling. The way to negate that is not only finding footing, but remounting a breakout rally.

PYPL will see resistance starting at $270 per share. That zone extends for $20 before buyers could find some relatively open air.

These are not insurmountable resistance levels, but they won’t be  easy. PayPal bulls will definitely need the help of the market to accomplish this. They can’t rally alone, and they can’t recover if the indices are falling.

In fact, I already charted the recent downslide as a potential scenario for PYPL. This relative clarity gives me some comfort knowing that it was not a blindside in the chart. There could be a little bit more downside this week but this is most definitely a viable dip. 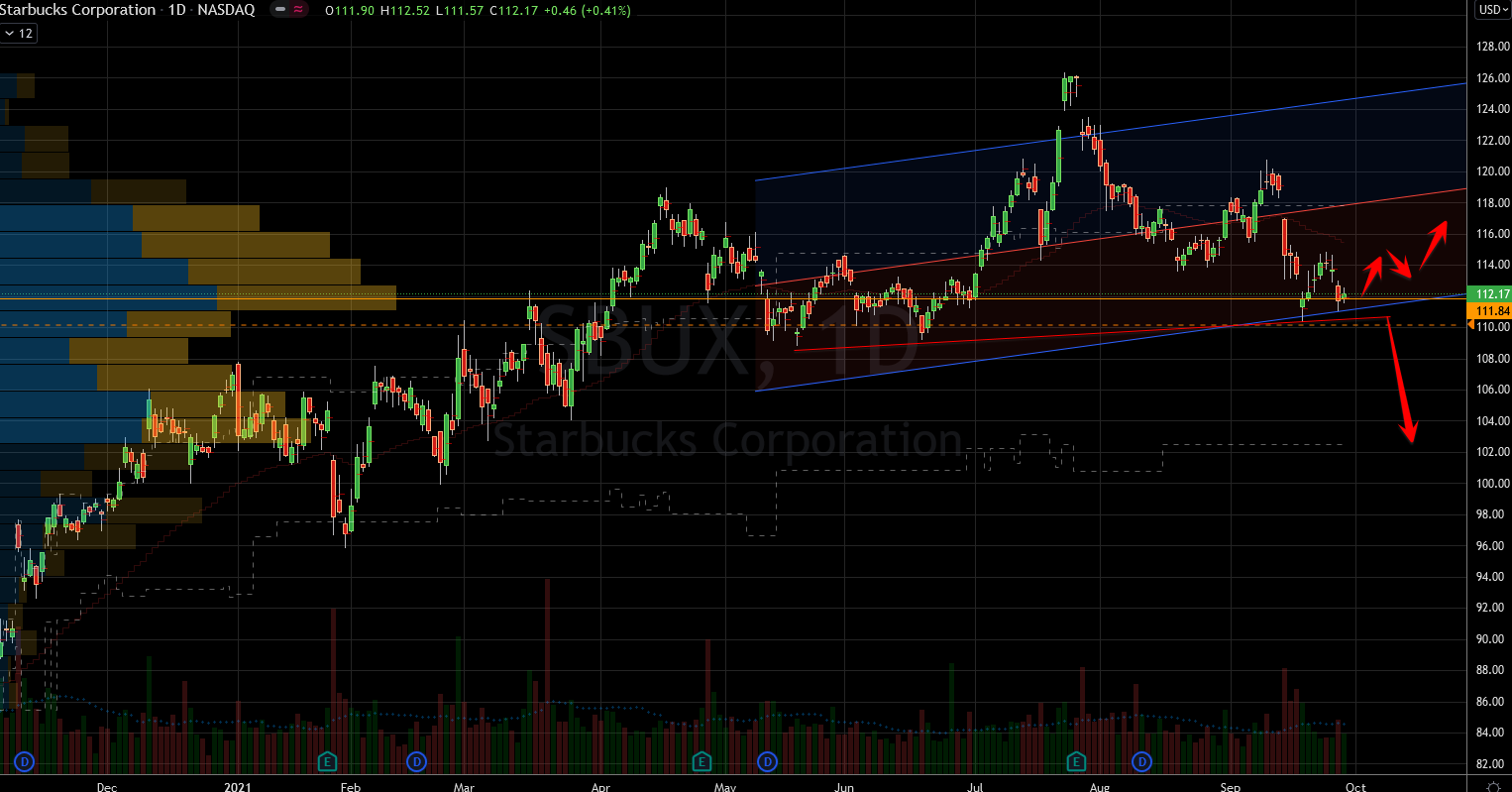 I haven’t recommended Starbucks in a long while. After the pandemic forced a global shutdown, its business changed overnight and I’m not yet confident the new model is as fruitful as the old one. I remain a skeptic, but today I am trading it bullishly.

The price action in SBUX stock does not agree with my opinion. Evidence is that the company stock notched new all time highs. Therefore, I would rather deploy upside trades in the stock. These comments could also apply to longer-term investors with better conviction than mine.

Starbucks stock fell 11% from its July highs, shedding enough froth to bring my attention to it now. It is also falling into the base from which it rallied two months ago. When a stock falls into a prior pivot point, it tends to find footing. Case in point, what happened last week when market corrected on Monday September 20. SBUX stock bounced and delivered a quick 4% rally.

The present swoon is giving back some of that progress. If this was a trade, I would stop out if the low from September 20 fails. Then SBUX could technically trigger a wonky bearish head-and-shoulder pattern with ominous intentions.

That downside scenario could extend $10 from there, but that is not my assumption; hence my upbeat write up today. The upside potential, on the other hand, could extend all the way up to $120 per share. There are resistance levels in between, but the bulls are up to it.

Fundamentally, Starbucks is still a solid company. Total revenues amazingly have recovered from the pandemic and set new highs. Net income held positive even last year; the company even swung back to a $3 billion run rate.

On paper, it’s hard to notice the complete shut down event of last year. This is testament to the company’s solid management team. Valuation is not cheap, but it’s still reasonable. The 46 price-of-earnings ratio is high, but the price-to-sales under 5 is OK. Behind strong fundamentals, the upside potential outweighs the downside risk. 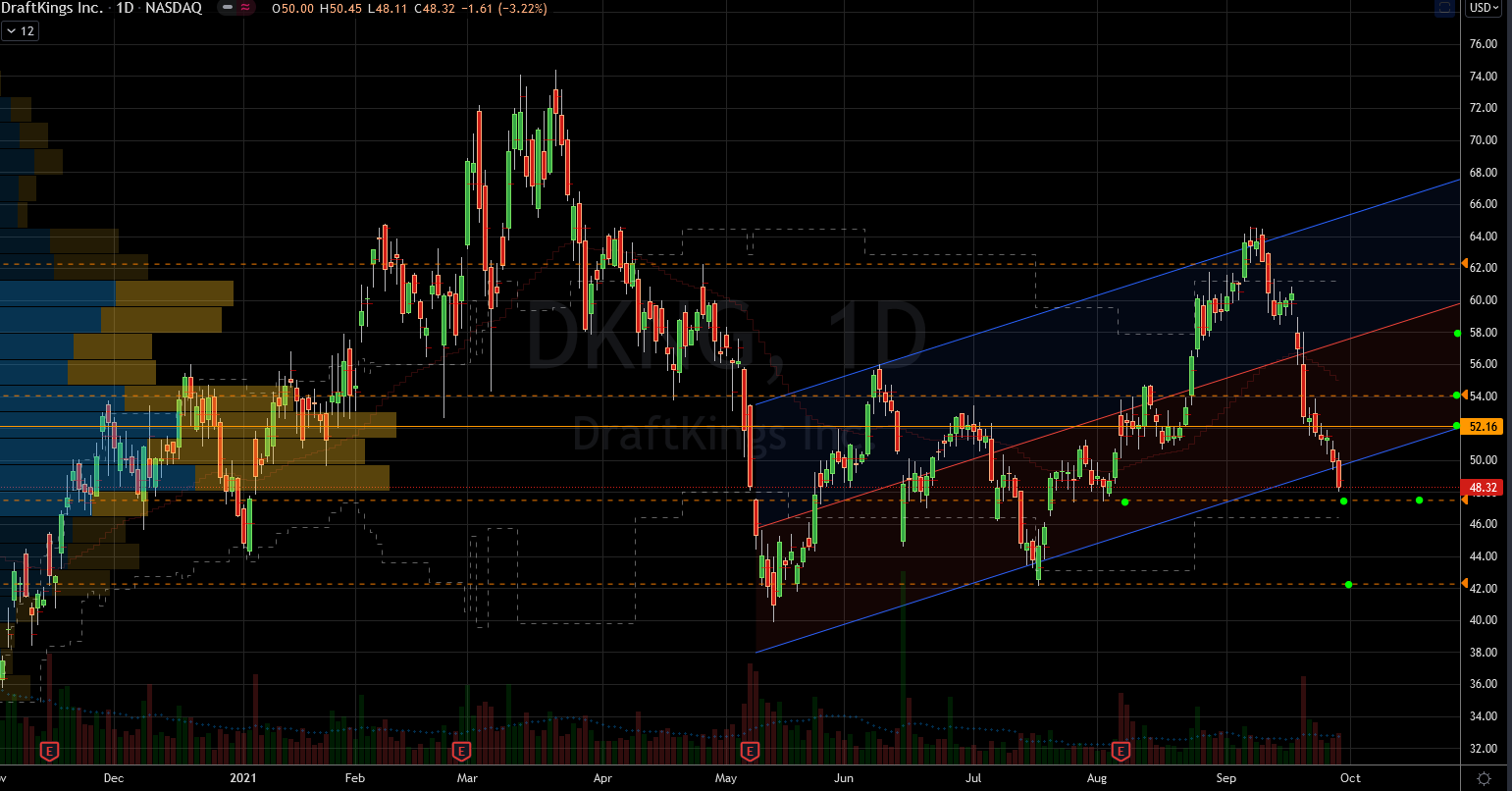 Our third pick today is perhaps the most controversial. The first two have a long history on Wall Street, whereas this name is relatively new. It came to life during a very tough pandemic year, but it has since blossomed in a major way. Even though its year-to-date and one year stock performances are pitiful, it is still up 300% from inception. There’s no need to feel bad for investors who believed in Draftkings from the get-go.

Shorter term, there has been pain in DKNG stock recently. It peaked in March of this year before losing nearly half its value by mid-May. The bulls were subsequently able to mount another 60% rally but September brought yet another 25% correction. This is where DKNG sits now, as it falls back to levels closer to its July base.

The stock is now at the price where it has thrice previously mounted big rallies. I would bet money there are buyers lurking again, so this is a falling knife that deserves your attention. Below $48 to $47 per share, the bears could get bolder and take the stock $5 lower.

I consider this a speculative entry. Using options to diffuse bullish risk would be my choice in this case. There I can sell puts much lower than current price and be long with a safety buffer. Furthermore, no money leaves my account and the worst case scenario would be me buying shares at a lower price. Not needing a rally to win is also an attractive feature of such a strategy.

The fundamentals are too young to judge harshly one way or the other. On paper the growth is there, but how believable and sustainable is it really? Only time will tell. The price-to-sales is 19, cheap if DKNG can sustain the growth rate. Revenues have more than doubled in the last two years. That’s impressive enough for me to give them the benefit of the doubt for now.

Critics could complain about the fact that Draftkings still loses billions, but they’d be wrong. Insisting on profitability in a growth company is not something I seek. That kind of thinking would have caused them to miss out on Amazon (NASDAQ:AMZN) and Netflix (NASDAQ:NFLX). Their critics accused them of squandering fortunes. In reality they were building pretty incredible trends. Imagine the world without online shopping or streaming content.

The post 3 Stocks to Buy While Investor Confidence Is Shaky appeared first on InvestorPlace.