By María Arcia October 4, 2021
This article was translated from our Spanish edition using AI technologies. Errors may exist due to this process. Opinions expressed by Entrepreneur contributors are their own.

Would you send your tennis shoes to the dry cleaner? Two brothers wanted to keep their small collection of sports shoes clean and in good condition at all times, so it occurred to them that they could experiment with various cleaning techniques and methods until they found the right one, and they did.

After finding an appropriate way to clean his sports shoes, Magdiel Pedraza (Mag), began offering this service to friends and family, what he never imagined is that he would have “such a good response”.

“He had a very good response, so much so that we started to create a Facebook and Instagram page to offer the service to sneakerheads , who are tennis lovers, and to all the people who love to be with their shoes. as presentable as possible ”, explains Magdiel in an interview for Entrepreneur in Spanish.

In this way, a graphic designer, Mag, and an economist, Alonso Pedraza, dared to launch “ BACK2LIFE ” on social networks, a professional cleaning service for tennis and sports shoes. The brothers managed to combine the creative part of one with the calculating mind of the other to consolidate the business and thus began this path in 2017.

"On my side, it's like the numbers-oriented part and from Magdiel it's 100% the creative part," says Alonso Pedraza.

“Basically, when you have a dirty pair of tennis shoes or something happened to them and you want to contact Back2Life to help you bring them back to life. There are several ways to do it, you can send us a WhatsApp, a Facebook message or a DM on Instagram and each of these is taken care of ", says Mag.

After sending the message, the staff is in charge of asking a series of questions and asking the customer for photos of the footwear in order to make a diagnosis that allows them to know what type of service the shoes need.

“Once you gave us the context, we ask you for photos of your footwear to be able to evaluate them and give you a real diagnosis, we don't like to lie to people and tell them that their shoes will be like new because there is no method to leave Some sneakers like new, but with these photos we tell you: thank you very much as we can see if they are full of mud or have beer, etc., ”says Mag.

After the diagnosis, specifying the services that the tennis shoes need and the price of them, the company's employees agree on a meeting point with the client, which can be in their physical workshop or in four specific places within Mexico City.

Once your footwear is collected, it is returned to you in three to five days, depending on the service it requires. Likewise, when they give you your shoes they give you recommendations to be able to give them “a kind of CPR” in any emergency situation and “while the ambulance arrives”.

"We are always moving around in different parts of the city to be able to have more and more coverage of the people and to end the pretexts of continuing to wear dirty tennis shoes," says Mag.

"It is not so easy for you to have the confidence to give your tennis shoes to someone you meet on the street and see you in a week, much less if you spent between 30 and 40 thousand pesos on them," says Alonso.

However, the pandemic came to reaffirm the digital sales model of both products and services, and despite the fact that people began to spend less money on washing their tennis shoes during the quarantine, the brothers explain that they took the risk to continue and until now What started with a capital of no more than 500 pesos has managed to complete the service of approximately eight thousand tennis shoes.

"Some of the people do not have that confidence to say 'yes, I am going to give you my tennis shoes because I know that you are going to return them to me clean or beyond that, they will return them to me.' Breaking that trust barrier helped us a lot to get people to jump in and the same consumers to recommend the service ”, explains Mag.

Word of mouth recommendations were their best ally, so much so that they now have a referral and promotion program so that people can continue to "enjoy their services."

The customer what he wants

This small business that was previously only in charge of cleaning tennis shoes and sports shoes has been expanding its catalog. “The lawsuit left us as a lesson that restoration had to go hand in hand with cleaning, so we dabbled in this, we took courses on restoration, repainting, restoring some details in worn skin, whitening yellow soles, among others. ”Says Mag.

Now in addition to cleaning sports shoes, Back2Life also offers repairs and, why not, cleaning suitcases, backpacks, and even caps. All based on what your customers have been asking for. 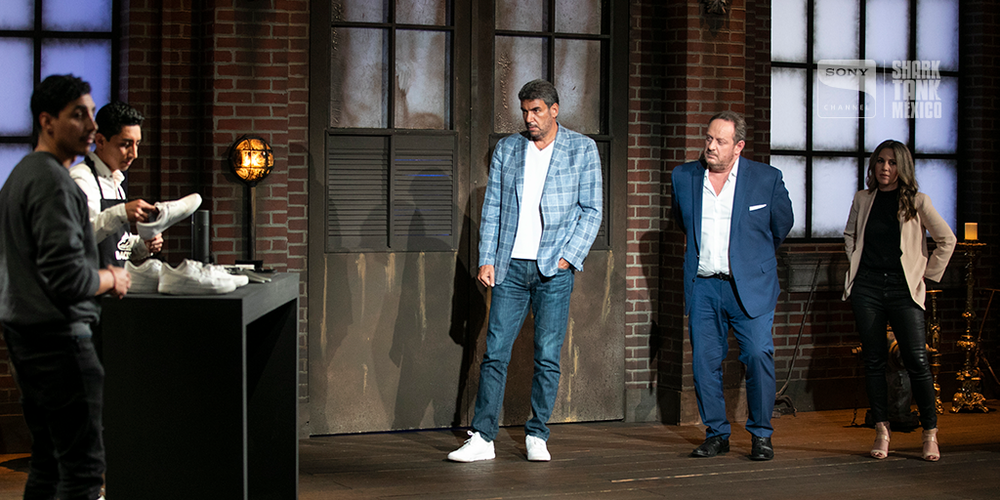 Mag and Alonso arrived at Shark Tank México , which airs every Friday at 9:30 p.m. on Canal Sony, asking for 700 thousand Mexican pesos (35,000 dollars approximately) for a 20% stake in their company, and they also offered five pesos for each tennis shoe washed in their new physical workshop.

"It really is incredible how they have managed to solve a lot of things, this is 100 percent Mexican ingenuity," Marcus Dantus expressed on the show.

However, the sharks that were interested in the project were Deborah Dana and Arturo Elías Ayub, who offered the entrepreneurs the amount they were asking for 20% of the company for each (that is, 40%) plus the five pesos. for each tennis washed both at the branch and through the online channel until they recover their investment. Mag and Alonso accepted this proposal.

"We want to continue growing the project, the brand, all the content we generate, but mainly, we want to reach more places, getting closer to many more people," says Mag.

Being a niche business, entrepreneurs give us two tips for those who try or find themselves in a turn that is dedicated to a very specific audience:

1. Be risky but grounded

“If what you are saying at that moment has no basis for me it will diminish importance and forcefulness, I am one of the people who makes a decision, but when before I tried something or looked for someone who had already tried it to learn from him … I think you always have to be risky, but with a knowledge and argument behind that risk ”.

2. Leave no room for doubts

“Under that same risk principle. Do not hesitate in what you are going to do, the truth is that you may fail or succeed, but you do not have to hesitate to do it because that is a very personal learning of your own ”.