Despite Critics, Thoughtworks Still Has Upside Given Its Growth and Profitability

Thoughtworks (NASDAQ:TWKS), the global IT consulting firm, recently went public via an IPO on Sept. 15 at $21.00. It has shot up to $28.08, as of Oct. 1, which some critics say is too high compared to its peers. But I disagree. I think given its growth and profitability TWKS stock could rise to at least $38.75 by next year, or 38% higher. 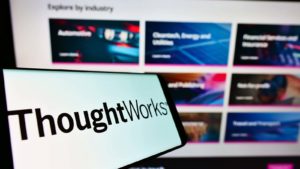 Using Oct. 1’s price, the stock has a market capitalization of $8.566 billion. This is based on page 11 of the company’s final prospectus filed with the SEC on Sept. 16. It shows that there are now 305.08 million shares outstanding after the company raised approximately $315 million from the IPO common stock capital raise.

This market value seems to be too high for some critics, including this one at Seeking Alpha who compared its value to Globant S.A. (NYSE:GLOB). Globant is a larger IT consultancy and it seems a bit unfair to do this kind of comparison right now.

The reason is Thoughtworks is growing very quickly and, in addition, is very profitable, including from a cash flow standpoint. Let’s look at this further.

The IPO prospectus shows (page 13) $498 million in revenue in the first six months of 2021, up 24.3% over the $400.5 million last year. Moreover, its profitability was $105.5 million in adj. EBITDA (earnings before interest, taxes, depreciation, and amortization). In addition, the company made $60.3 million in cash flow from operations or CFFO (page 16).

That CFFO represents 12.1% of the first-half revenue. We can use this to project out the company’s CFFO going forward and from that its inherent target value.

For example, given that Thoughtworks revenue rose almost 25% in H1, we can assume that by the end of next year, annual revenue will hit $1.245 billion. This is seen by doubling the first-half revenue to $996 million and then growing that figure by 25% to forecast $1.245 billion in 2022.

Now let’s assume that its CFFO margin grows to 15% with higher revenue next year. That brings its CFFO estimate to $186.75 million for all of 2022. Assuming it spends 5% of that figure on capital spending, its free cash flow (FCF) works out to $177.41 million. This FCF figure can be useful in estimating Throughworks target price.

What Thoughtworks Stock Is Worth

This method of valuing the company looks simply at the company’s growth traits and its profitability. The market is likely to give it a high valuation because it assumes that the company will keep on the growth track that it sees the company following. The fact that it might be decelerating its rate of growth right now is not that important. It could be though, once TWKS stock is at its full valuation.

Where This Leaves Investors in TWKS Stock

Since Thoughtworks just went public, no analysts have written any kind of research report on it. This is a very strange situation that is not typical of other countries. In the U.K. and Europe, for example, newly public companies almost always have institutional research available on the stock.

That is why it’s important to do your own assessment of the value of a company. My simple model can act as a ruler or rule of thumb to value its ongoing free cash flow. It shows that TWKS stock could be worth up to 38% more at $38.75, assuming sales grow by 25% and its CFFO margin rises to 15% next year. Enterprising investors might take an initial position with a view to increasing their holding if TWKS stock falls.

The post Despite Critics, Thoughtworks Still Has Upside Given Its Growth and Profitability appeared first on InvestorPlace.