By Swayta Shah October 8, 2021
This story originally appeared on Zacks

Over the past five trading sessions, the performance of major bank stocks depicted an optimistic stance. The continued market optimism on the back of the Federal Reserve’s slightly hawkish stance on monetary policy is driving the bank stocks.

The steepening yield curve, as well as the expectation of solid economic growth, will benefit major banks’ net interest margins amid a low interest rate environment. This, in turn, will support major banks’ top-line growth. With banks’ financials directly tied to the health of the economy, investors are now expecting improved profitability for major banks in the quarters ahead.

Important Developments of the Week

Additionally, Regions Financial’s subsidiary, Regions Bank, has inked a transaction to acquire Sabal Capital Partners, LLC, a diversified financial services firm leveraging tech-driven origination and servicing platform for the small-balance commercial real estate market. While the financial terms of the transaction, expected to close in the fourth quarter of 2021, have not been disclosed, the acquisition of Sabal is likely to expand Regions’ real estate solutions across the full gamut of agency offerings.

2. U.S. Bancorp’s USB primary subsidiary, U.S. Bank, which is foraying into the cryptocurrency arena, is garnering custody access to its Global Fund Services clients. It has launched a cryptocurrency custody service for institutional investment managers having private funds in the Cayman Islands and the United States, who would fancy a safe solution for their Bitcoins.

3. BNY Mellon BK is strengthening its transactional & custody foreign exchange (FX) offerings. Effective immediately, the company is adding new trading capabilities, which will turn it into “a transparent open architecture that can be leveraged by a variety of client types for their rules-based, end-to-end transaction needs.”

Driven by the changes, the clients in the company’s FX trading programs will now be able to personalize how they trade currencies through it. This will lead to more transparency and provide increased flexibility for participants.

Through the enhancement of FX offerings, clients will be able to “design elements of their standing orders.” This will also help in portfolio customization as well as upgrade “trade micro-timestamping facilitates” and offer more clarity as to how the instructions are being executed.

BNY Mellon’s new offerings will help upgrade Asia’s capabilities. Specifically, it will enhance offering across the APAC markets and at the same time broaden the client coverage team across the region.

This new development will complement BNY Mellon’s launch of an API FX solution in July last year, which lowered “confirmation times for restricted emerging market currencies from hours to seconds.” Also, the company’s expanded FX capabilities in Singapore, which started in June 2020, will capitalize on these new offerings.

4. Bank OZK OZK has yet again announced a dividend hike. The company declared a quarterly cash dividend of 29 cents per share, reflecting a rise of 1.8% from the prior payout. This marks the 45th consecutive quarter of dividend hike by the company.

Here is how the seven major stocks performed: 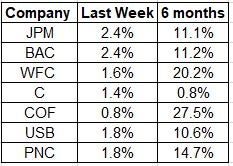 Over the past five trading days, both JPMorgan and Bank of America recorded maximum gains, with their shares rallying 2.4% each. Also, shares of both U.S. Bancorp and PNC Financial have gained 1.8% during the same period.

Over the past six months, shares of Capital One and Wells Fargo have jumped 27.5% and 20.2%, respectively, while PNC Financial has gained 14.7%.

Over the next five trading days, third-quarter earnings for banks will begin in full swing. Like always, the Wall Street giant JPMorgan will kick start the banking earnings season, reporting on Oct 13. Other big names – Bank of America, Citigroup, and PNC Financial – are scheduled to announce quarterly numbers on Oct 14.