InvestorPlace - Stock Market News, Stock Advice & Trading Tips With Americans having been cooped up and complying with mandates for over a year, cabin fever could lift these entertainment...

By Josh Enomoto October 8, 2021
This story originally appeared on InvestorPlace

Overall, one of the main catalysts for President Joe Biden’s 2020 electoral victory was his stance on the novel coronavirus pandemic. Leading up to the election, former President Donald Trump’s administration made critical errors, primarily flirting with unsubstantiated Covid-19 allegations which undid the good of Operation Warp Speed. In turn, it’s unfortunate because people are tired of pandemic-related restrictions. However, they do bode favorably for entertainment stocks to buy.

True to form, once Biden took over the executive office, he began implementing what would eventually become a six-pronged national strategy to combat Covid-19. Mainly, this involved encouraging vaccinations for the 18 and older crowd and implementing mitigation efforts — testing, masking requirements, social distancing in certain indoor settings — to stem the tide. However, what were once popular initiatives have lost their luster, ushering in relevance for outdoor entertainment stocks.

According to data from Ipsos, “Fewer than half (45%) now trust President Biden to provide accurate information about coronavirus, down significantly from when he took office in January (58%).” Moreover, compared to January’s high point, “Biden has lost trust relatively evenly across the board from Democrats (an 11-percentage point decline to 81% trust a great deal or fair amount) and Republicans (a 10-point decline to 11%).” Cynically, this should lift the narrative for entertainment stocks.

Unfortunately, the current president is suffering from the same timing issues that stymied the previous administration. The American people are willing to play along with government requests but the messaging has to be clean, consistent and clearly defined. Even then, information from the Washington Post indicated that the public was already weary about the pandemic from last year. Again, this backdrop should help entertainment stocks.

Plus, with Covid-19 cases finally declining again following a surge due to the Delta variant, consumers are looking forward to a normalization in their personal lives. Therefore, risk-tolerant investors may want to keep an eye on these outdoor entertainment stocks to buy.

Naturally, the ongoing developments of 2021 — from the pandemic to geopolitical flashpoints to domestic and global economic concerns — make any sector suspect. Therefore, while entertainment stocks offer a contrarian angle, keep an eye on the headlines as things could change in a heartbeat.

According to the Orange County Register, the iconic Disneyland has been enjoying a bounce back in attendance metrics, with numbers now at 85% of the level they were in 2019. In many ways, this figure makes sense and if I were a betting man, I’d say that the stats will likely increase from here on out, auguring well for Disney and its DIS stock.

Indeed, if you’re going to place a bet on outdoor entertainment stocks, the Magic Kingdom offers quite a powerhouse package. Of course, getting the company back its theme parks and resorts business will be huge since this segment is the biggest revenue generator for the company. As people become acclimated to the new normal, more people will be comfortable in high-contact situations.

As well, the entertainment giant has been busy building out its streaming platform Disney+. Thanks to ownership of the Star Wars franchise, Disney is able to churn out various content spun off from the beloved series of movies. That’s essentially a license to print money, an opportunity which the company has taken full advantage of.

While everyone knows that 2020 was a brutal year for entertainment stocks tied to the theme park business, the 2020 Themed Entertainment Association/AECOM global attractions attendance report truly laid out the ugly storyline. Per SpectrumNews1.com, in Los Angeles, “Universal Studios Hollywood experienced a steep 81% year-over-year attendance decline from 9.7 million to 1.7 million.”

That of course was bad news for parent company Comcast, which like its rival Disney suffered the brunt of the paradigm shift that Covid-19 imposed. Out of nowhere, the SARS-CoV-2 virus struck, immediately crippling all non-essential high-contact businesses. A double whammy for entertainment stocks associated with the film industry, Comcast had to delay the launch of several highly anticipated movies originally scheduled for 2020.

But with neighboring Disneyland enjoying a traffic resurgence, it might be time for investors to reconsider CMCSA. In addition to the acclimatization narrative, outdoor entertainment stocks benefit handsomely from retail revenge; that is, consumers hellbent on spending to make up for a lost year.

My biggest near-term concern for CMCSA stock is that at time of writing, the stock is trading pensively, sandwiched between its 50- and 200-day moving averages. But if you can overlook this risk, it might be something to consider. 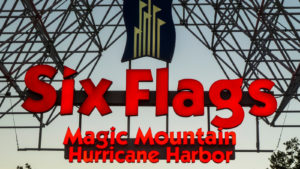 While virtually all entertainment stocks undergirded by outdoor offerings suffered during the initial onslaught of the Covid-19 crisis, Six Flags was among the worst-hit players. As the world’s largest regional theme park company, Six Flags lives and breathes on high traffic volume. Without it, SIX shares hemorrhaged sickeningly, at one point during the March doldrums appearing to be done for good.

Indeed, the above global attractions report indicated that “Six Flags Magic Mountain also suffered an 81% year-over-year drop in attendance, from 3.6 million visitors in 2019 to 686,000 in 2020.” Frankly, that SIX stock was able to trudge forward is a small miracle, evidence that American resilience and ingenuity is still alive and well.

Despite having boomed from the 2020 lows, against its late 2019 levels, SIX stock still offers a relative discount. For contrarians, it might be worth considering picking up some shares. Fundamentally, America’s comparatively older demographics favors Six Flags: millennials are entering their peak earning years while being at an age where kid-centric Disneyland isn’t as appealing.

As well, Six Flags broader demographic relevance is a great place to kickstart socialization, making it one of the more intriguing outdoor entertainment stocks to consider. 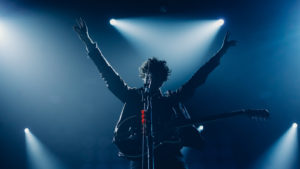 As soon as the Covid vaccine rollout began gaining momentum earlier this year, shares of Eventbrite rocketed higher, eventually hitting a closing peak in mid-March. Since then, EB stock has gradually been on the decline, perhaps a victim of the buy-the-rumor, sell-the-news phenomenon. Whatever the case, intrepid contrarians may want to add Eventbrite to their list of entertainment stocks to buy.

An event management and ticketing specialist, the service allows its users to promote local events. In exchange for ticketing services, Eventbrite charges a fee to organizers, which seems like a great business model at this moment. With cabin fever having set in for over a year now, people are ready to get out — not just for relatively mundane activities but for full-fledged fun such as concerts.

And that’s part of the beauty of EB stock. Through the underlying company’s website, consumers can search for various events. With this month being October, Halloween costume parties and other holiday-specific gatherings are incredibly popular. For those who still want to remain contactless, Eventbrite also coordinates online workshops. 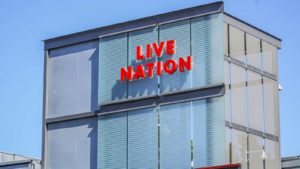 Another one of the entertainment stocks that suffered a devastating blow during the early days of the Covid-19 crisis, Live Nation’s volatility was unfortunate but understandable. As a specialist in concerts and music festivals, the company obviously relies on strong consumer discretionary sentiment and high traffic volume. The pandemic knocked both factors out of commission in 2020, temporarily devastating LYV.

But in similar fashion to most other entertainment stocks, the anticipation of a return to normal made LYV a once-in-a-decade (or longer) opportunity. What makes Live Nation shares distinct is that they’re continuing to rise. For instance, over the trailing month, LYV is up 12%. That’s despite multiple concerts and festivals canceling due to the spread of the Delta variant.

So, why would LYV stock rise higher under this negative backdrop? At least one component probably involves the aforementioned buy-the-rumor element. Before news of a return to normal makes headlines, risk-tolerant contrarians can bank on this narrative occurring before it happens.

Of course, if it doesn’t pan out, you’ll be staring at some losses so be careful with this one. 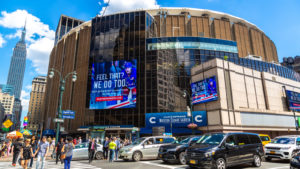 Though not an exclusively outdoor entertainment facility, shares of Madison Square Garden Entertainment are still worth mentioning because it’s the thought that counts. With people tired of the various mandates, a return to indoor arenas en masse could be the next big step in the new normal.

At the same time, this is also a risky circumstance. True, over the course of this year, ballgames gradually invited a rising number of guests culminating in full stadiums this fall. But will consumers be as comfortable entering indoor arenas packed with tens of thousands of strangers?

It’s possible given that people are also taking to the friendly skies trapped with other passengers on trips lasting five hours or more. However, before speculators take a stab at MSGE, it’s worth noting that this equity unit has been one of the most frustrating among entertainment stocks.

It really started with the company’s initial public offering — back in early April 2020. You couldn’t have asked for worse timing, particularly for an entertainment play. But if you’ve got some speculation funds lying around, MSGE stock might be worth a look. 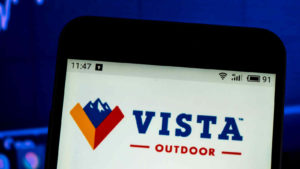 Prior to the Covid-19 outbreak, the sedentary nature of digitalized platforms made for a tough environment for the outdoors industry. With every entertainment option available at one’s fingertips, there was declining incentive among millennials to engage in outdoors activities, in contrast to prior generations. Ironically, the pandemic has helped change this narrative.

Suddenly, being outdoors was a great way to not only get exercise but also as an alternative vacation plan amid the global health crisis. Participants can enjoy maximum social distancing while having some downtime. And getting sunlight is always a good idea compared to the artificial backlight we’re exposed to daily from our laptops.

Therefore, the outdoors industry could potentially enjoy a positive paradigm shift. If so, that would only be to the benefit of Vista Outdoor, a specialist in various products and apparel for physical activities. Better yet, if the outdoors component doesn’t pan out, Vista can always ride the ammunition craze.

That’s right, the company is a major supplier of ammo and with a supply shortage going on due to unprecedented demand for firearms, VSTO stock remains in prime position to benefit.

Pinterest Gets the Call from PayPal: Imagine a New E-Commerce Powerhouse

The Currency Of The Future: A Bitcoin (BTC) Boom