InvestorPlace - Stock Market News, Stock Advice & Trading Tips AAPL stock investors have enjoyed a 107% growth in dividends per share compared to just a 41% increase in the...

Apple (NASDAQ:AAPL) has been very shareholder-friendly in the past 10 years. It started paying a dividend 10 years ago starting at the end of its fiscal year ending September 2012. In the past nine fiscal years, it has been paying and growing its dividend per share (DPS) as well as buying back shares. The bottom line is that AAPL stock has benefited greatly from a higher DPS as a result of these huge buybacks. This article will show how that has worked out.

Typically Apple raises its dividend every four quarters, starting in April. For example, this year Apple jacked the quarterly DPS to 22 cents, up from 20.5 cents in the prior four quarters. That is a gain of 7.33% over last year in the dividend. At today’s DPS, AAPL stock has a dividend yield of 0.62%, given that the stock is at $143.99 on Oct. 7, 2021.

I will show in this article that the DPS has actually grown faster than the cost of those dividends over the past nine years by a significant factor. This is solely due to the huge buybacks that Apple has made over that period. As a result, shareholders now enjoy a much higher dividend than otherwise, given that its cost has not risen anywhere near as fast.

This works out to an annual compounded reduction of 3.58% per year. In other words, each year you can expect that on average Apple’s share count will fall by 3.6%.

The reason, obviously, that the count has fallen is due to the huge share buybacks that Apple has done in the past nine years. For example, in the year ending September 2012, Apple spent $1.22 billion on share repurchases. But by the end of September 2021, Apple will have spent $90 billion (our estimate) this fiscal year on share repurchases. That is a huge gain in buybacks.

So, obviously, this has direct benefits for the payment of the dividend per share (DPS). For example, even if the company kept the dollar cost it paid for those dividends level, the DPS would rise by 3.6% annually since there are fewer shares outstanding.

In reality, the benefit has been greater than that, since Apple has consistently increased the amount of money it shelled out for dividends. For example, in FY 2013 Apple spent $10.5 billion on dividends, but by FY 2021, Apple is estimated to pay almost $15 billion ($14.91 billion). 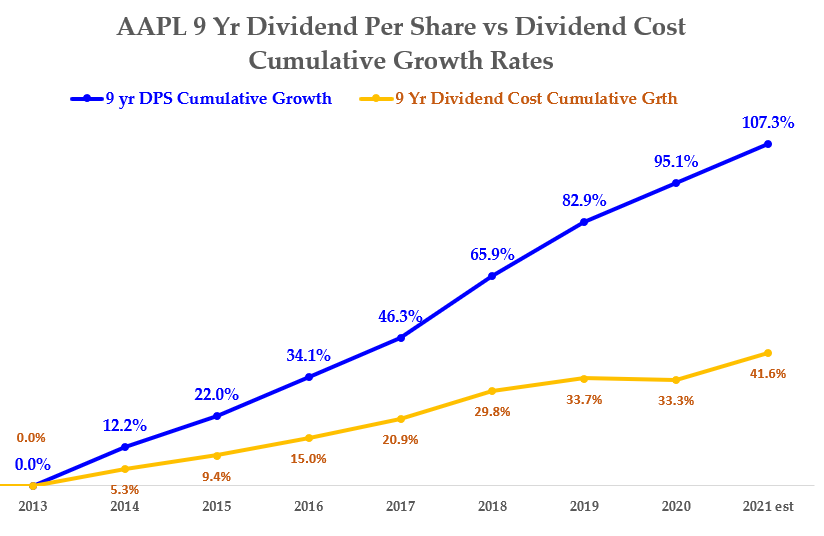 You can see this in the chart above which shows how dividends per share have grown much faster than the cost of those dividends. This is a direct result of the huge reduction in the share count from its massive buybacks over the years.

What This Means For AAPL Stock Investors

Obviously, this implies that the benefits of the buybacks in terms of dividend growth accrues to long-term shareholders. There is also a tax benefit to buybacks in terms of the payment of the dividend as I have described in other articles in the Total Yield Value Guide (see below). But the main point is that investors in AAPL stock can expect that the company will be very shareholder-friendly.

This means that despite the high stock price investors might want to continue to buy shares in AAPL stock. This will allow them to benefit from its continuously growing dividend per share.

On the date of publication, Mark R. Hake did not hold a position in any security mentioned in the article. The opinions expressed in this article are those of the writer, subject to the InvestorPlace.com Publishing Guidelines.

The post Apple’s Dividend Growth and Huge Buybacks Are a Big Win for Investors appeared first on InvestorPlace.

Looking for a Growth Stock? 3 Reasons Why Callon (CPE) is a Solid Choice

Looking for a Growth Stock? 3 Reasons Why FirstService (FSV) is a Solid Choice