3 Stocks to Buy to Ride Higher Electricity Demand in Q4

InvestorPlace - Stock Market News, Stock Advice & Trading Tips With the demand for electricity climbing amid the EV revolution, it's an excellent time for investors to purchase electric stocks....

By Larry Ramer October 13, 2021
This story originally appeared on InvestorPlace

Tesla (NASDAQ:TSLA) CEO Elon Musk recently suggested that, if all transportation is electrified, the global demand for electricity could roughly double. That, in turn, would “create a lot of challenges with the grid,” he stated.

Musk’s statement dovetails with my own, long-held beliefs about the improved results that many electricity-oriented companies are likely to see as the electric-vehicle boom continues. In the wake of his comment, I’m even more bullish on electric stocks.

Indeed, I believe that we’re already seeing the EV and clean-energy revolutions greatly impact the demand for electricity. Europe desperately seeks more natural gas. California is dealing with the occasional electricity outage. And the Street appears to be recognizing the increased value of electricity. All of this makes now a good time to buy electric stocks.

Global electricity production must greatly increase. And the grid has to be improved. Multinational companies that build power plants, along with firms whose products enhance the grid, are likely to benefit. Further, the companies that supply the commodities (other than the dirtiest varieties of them) and systems needed to produce electricity are also likely to benefit greatly from the EV revolution.

As a result, three of the best electric stocks to buy are:

“Electric” is in the company’s name, and it does remain a big part of the conglomerate’s business.

In addition to gas turbines, Power sells other types of equipment for power plants. And the Renewables unit markets products that enhance the grid.

Given these points, GE’s Power and Renewables units are likely to get a big lift from the new normal.

Since Sept. 21, GE stock has climbed roughly 10%, making me believe that the Street is starting to recognize the high value of the Power and Renewables units. 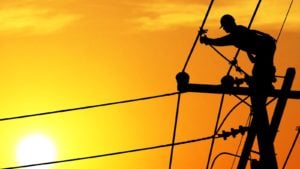 As I noted in a past column, “American Superconductor sells products that enable utilities and businesses to effectively connect renewable energy sources to the grid and manage electricity flows.”

The company’s CEO, Daniel McGahn, has said that such products, which the company calls “new energy power systems,” could generate $80 million of revenue per year. American Superconductor’s total revenue in fiscal 2020 was $87 million.

Earlier this month, American Superconductor divulged that it had received $22 million of orders for such systems.

“Our new energy power systems business continues to expand and is accelerating. Our bookings momentum was strong at the start of the fiscal year, and we expect this strength to continue into the second half of fiscal 2021,” McGahn said in a statement.

On Aug. 31, American Superconductor and Chicago electric utility ComEd, announced that AMSC’s REG system had begun enhancing ComEd’s grids in the Windy City. According to AMSC, REG “utilizes high-temperature superconductor wire to enhance the reliability, resiliency and performance of the electric power grid.”

The U.S. Department of Homeland Security helped fund the deployment of REG in Chicago. McGahn has said that other utilities are interested in deploying REG, and the bipartisan infrastructure bill should give them significant, additional funds to do so.

With Europe and the U.S. meaningfully cutting their coal use and the U.S. exporting record amounts of natural gas, the prices of the commodity have soared.

Meanwhile, many environmentalists are realizing that renewables aren’t ready to meet the Western world’s entire demand for electricity, especially as transportation is electricized. Since natural gas is much cleaner than coal and oil, many states, cities and countries are turning to gas.

And demand for natural gas tends to be highest during the winter. Given these points, I believe that natural gas prices are likely to keep climbing for at least the next few months.

It’s not easy to know which natural gas producers are the most efficient and have access to the best resources and market. Consequently, I decided recently to buy shares of the First Trust Natural Gas ETF.

According to U.S. News and World Report, “The index is designed to track the performance of mid and large capitalization companies that derive a substantial portion of their revenues from midstream activities and/or the exploration and production of natural gas.

On the date of publication, Larry Ramer held long positions in AMSC, GE and FCG. The opinions expressed in this article are those of the writer, subject to the InvestorPlace.com Publishing Guidelines.

Larry has conducted research and written articles on U.S. stocks for 14 years. He has been employed by The Fly and Israel’s largest business newspaper, Globes. Among his highly successful contrarian picks have been solar stocks, Roku and Snap. You can reach him on StockTwits at @larryramer. Larry began writing columns for InvestorPlace in 2015.

The post 3 Stocks to Buy to Ride Higher Electricity Demand in Q4 appeared first on InvestorPlace.