Skillz Stock Is Running Out of Extra Lives

InvestorPlace - Stock Market News, Stock Advice & Trading Tips SKLZ stock has shown no ability to bottom in spite of having a valid thesis. The bulls need to step...

By Nicolas Chahine October 15, 2021
This story originally appeared on InvestorPlace

A fairly recent phenomena on Wall Street is the coming of SPACs. These are the special purpose acquisition companies that are an alternative to the IPO process. These are not new, but the concept caught fire last year. Among them was Skillz (NYSE:SKLZ) stock, and today we evaluate its outlook.

SKLZ stock collapsed after its honeymoon period ended. But that was the case with most of the SPACs, so it’s not necessarily issues to the companies. After the initial stages of massive rallies, SPAC stocks collapsed and most never recovered.

Frequently, $10 per share seems to be a magical number for the bunch. And sure enough, this is the level that SKLZ stock is trying to overcome this week.

It currently sits down -80% from its highs, and well below the breakout level from last December. Not all SPACs are bad, in fact this one came from the same team that brought us DraftKings (NASDAQ:DKNG). Clearly, Wall Street is not yet as sure about SKLZ like they are about DKNG. Onus is on management to prove to investors that it is worthy of the risk.

The Addressable Market Is Growing

Gaming is still hotter than ever before. For starters, it has become more unisex. Age also is no longer a barrier either, since the millennials didn’t lose their love for it. Gamers are global and now it has become a paid sport.

Moreover, and with the advent of mobile computing, Skillz is in the right spot 24/7. Gaming has left the confines of a console setting into people hands. We are all fair game to be their clients.

Nothing builds investor confidence like results. This is where SKLZ stock lacks because it is still too young. On a quarterly basis we can see an increase in revenues. But only a handful of data points don’t constitute a trend. In other words, there’s not much meat for the bulls to sink their teeth into.

Trying to judge it based on its fundamental metrics is futile. This is where due diligence matters and the prevailing opinion from those in the know is positive. Cathie Wood’s ARK Invest still owns millions of shares and they have kudos on Wall Street now. Trading the stock is almost a slam dunk at this point. I don’t mean that it is a guaranteed win, but rather that there’s not much deciding to do. 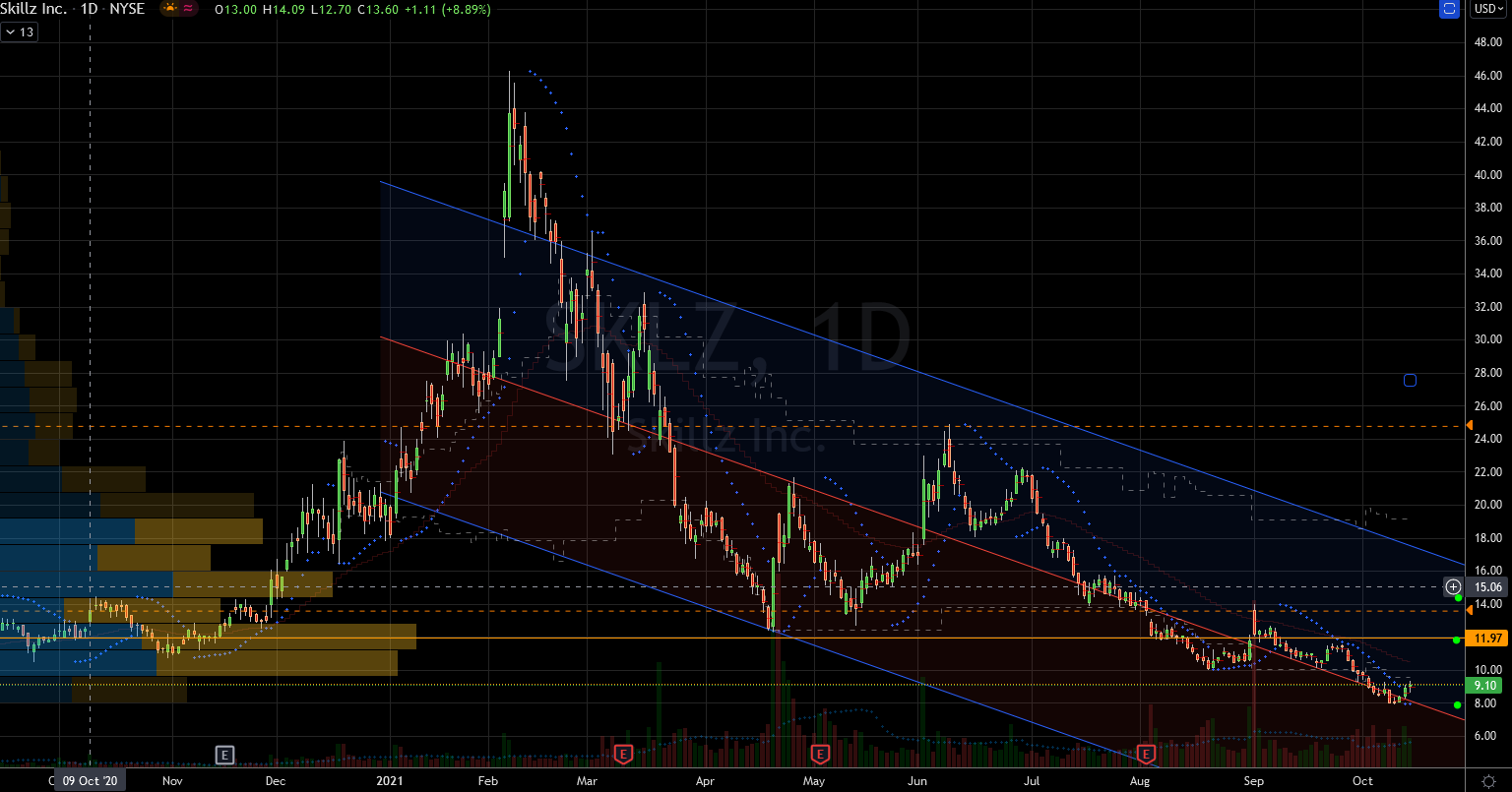 After the altitude it has already shed, it is too late to panic out of SKLZ stock. Those who want to bet on its long-term success can do so more comfortably. I say this because the chances of chasing late are very low at this stage. Compare to those who bought SKLZ stock in January or February. Using options also could be an alternative worth investigating. Options are not suitable for every investor but they do provide additional room for error.

A concerning point is that this stock is unable to find traction in a very bullish market. Therefore, it desperately needs the indices to continue breaking records so it can find footing. There is also the matter of China’s assault on gaming time there. The headlines took a toll on the whole sector from Take-Two (NASDAQ:TTWO) to Zynga (NYSE:ZNGA).

Everything I said so far suggests that this is a speculative stock. Therefore, I would need to place a stern stop loss below $8 per share. This would leave investors without tangible support levels. I don’t mind catching falling knives as long as I can see support. Occasionally closing a losing trade is part of successful trading in the long run.

The post Skillz Stock Is Running Out of Extra Lives appeared first on InvestorPlace.