By Rimmi Singhi October 18, 2021
This story originally appeared on Zacks

September auto sales data for China — the world’s largest car market — was released last week. Per the China Association of Automobile Manufacturers, vehicle sales in the country declined 19.6% year over year to 2.07 million units, tumbling for the fifth consecutive month amid the global shortfall in semiconductor supply. Nonetheless, electric vehicles in China managed to sustain the momentum, with sales of new energy vehicles more than doubling year over year to 357,000 units in September.

The European Automobile Manufacturers Association (“ACEA”) also released data for passenger car registrations made in September 2021. New car registrations in Europe witnessed a year-over-year decline of 23.1%, marking the lowest number of registrations for the month of September since 1995. Sales in each of the four key markets — namely France, Spain, Italy and Germany — saw double-digit declines. Nonetheless, over the first nine months of 2021, new car registrations grew 6.6% from the corresponding period of 2020. During the time period, total new passenger car registrations came in at 6.8 million. While Italy performed the best with a sales surge of 20.6%, France and Spain also witnessed growth of 8% and 8.8%, respectively. Meanwhile, sales in Germany slid 1.2% year over year in the said time frame.

Recap of the Week’s Important News

1. General Motors GM reached a pact with LG Electronics, per which, the latter will reimburse the U.S. auto giant for costs related to the recalls of Chevy Bolt EV and Chevy Bolt EUV amid manufacturing defects in the battery cells supplied by LG Electronics. The agreement comes as a breather for General Motors as it will recognize an estimated recovery in third-quarter profits, which will offset $1.9-$2 billion in recall charges.

In a separate release, the company reported third-quarter deliveries in China. General Motors delivered around 623,000 vehicles in the world’s largest auto market, reflecting a decline from 750,000 units in the second quarter amid a persistent global chip crunch. Sales across all major brands including Buick, Cadillac, Chevrolet, Baojun and Wuling declined sequentially.  Nonetheless, the Hong Guang MINI EV maintained its #1 position in the NEV model in the country, with sales reaching a new record of 99,000 units.

2. Sonic Automotive SAH announced plans to raise $1.5 billion through senior notes offering.  The auto retailer issued the notes in two tranches of different maturities, carrying different interest rates. The company priced notes worth $650 million, having an annualized interest rate of 4.625% and expected maturity in 2029. Another senior note offering worth $500 million carries an annualized interest rate of 4.875% and will mature in 2031. The offerings have been issued at par, with the sale anticipated to close on Oct 27, 2021. The proceeds will be utilized to fund the RFJ Auto Partner buyout and for general corporate purposes.

3. Toyota TM slashed its production guidance for November by around 15% amid a persistent shortage of semiconductor supply. Japan’s #1 automaker now aims to manufacture around 850,000-900,000 units, down from initial plans of producing 1 million cars. The revised output guidance will affect 50,000 vehicles in Japan and around 50,000-100,000 vehicles in foreign markets. Meanwhile, the company still maintains its full-year output guidance of 9 million units for fiscal 2022.

4. Keeping up with the active transition away from fossil fuels, recreational vehicle maker Winnebago Industries WGO announced its intention to become emissions-free by 2050. Its sustainability goals include zero waste to landfill, with 90% diversion of waste by the decade-end. It roots for advancing product sustainability, with plans to offer environment-friendly upgrades on new products by 2025 and product lifecycle assessments by the end of the decade. The goals also include the reduction of freshwater usage by 30% by 2050. In a separate development, the company boosted shareholder value with the authorization of an additional $200 million of stock buyback.

5. Cummins CMI announced that it would launch various software features to deploy powertrains with automated driving system (ADS) technologies. The company is joining forces with several ADS tech firms for seamless integration of new software features into its powertrain solutions. Meanwhile, Cummins also declared a quarterly dividend of $1.45 per share, payable on Dec 2, to shareholders of record as of Nov 19. The stock currently carries a Zacks Rank #3 (Hold). You can see the complete list of today’s Zacks #1 Rank (Strong Buy) stocks here.

The following table shows the price movement of some of the major auto players over the past week and six-month period. 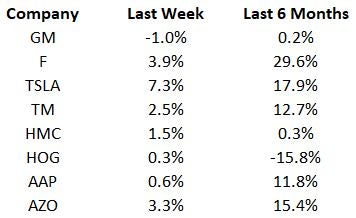 In the past six months, all stocks have registered gains apart from Harley-Davidson. In the past week, all stocks but General Motors have increased, with Tesla TSLA being the top performer.

Industry watchers will keep a tab on September commercial vehicle registrations, likely to be released by the ACEA this week. Meanwhile, investors are awaiting the third-quarter earnings releases of auto firms including Tesla, Lithia Motors, AutoNation, Genuine Parts, Gentex Corp, Autoliv, which are scheduled for this week. Also, stay tuned for updates on how automakers will tackle the semiconductor shortage and make changes in business operations.