By Dana Blankenhorn October 20, 2021
This story originally appeared on InvestorPlace

Microvision (NASDAQ:MVIS) stock became a meme stock this year because of self-driving cars. 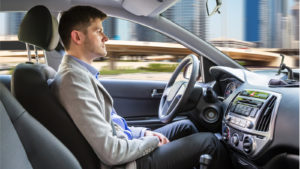 There’s an assumption that electrics and self-driving are part of the same revolution. Blame Tesla (NASDAQ:TSLA), which has been teasing autonomy along, with some people dying  because it can’t meet the promise.

Lidar is the technology that’s supposed to make self-driving practical, although Tesla doesn’t use it. Microvision offers to make lidar systems. Twice so far this year, small traders have bid MVIS stock to $20/share, only to see it fall to its Oct. 19 level of about $9.30.

It’s even overpriced there because, as its latest 10-Q report shows, Microvision has no product revenue. That doesn’t mean it lacks promise. It just means you’re buying promises.

Laser Imaging Detection And Ranging (Lidar) measures distances with a laser, calculating how long it takes the beam to bounce off a target. This makes it great for making maps, on the fly. There are 100 different use cases  in sciences, law enforcement, energy and more.

But it’s the autonomous car that has people excited about Microvision, which came public in 2018. Its PicoP is a tiny, high-end lidar technology that can be used to create maps of what’s coming as fast as a car moves. But as the company said when it went public, its assets are mainly a patent portfolio drawing royalties.

Those royalties amounted to $746,000 in the second quarter, against $572,000 a year earlier. The company spend $7.3 million on research, another $8.3 million running the company. That made for a loss of almost $15 million or 9 cents per share. What’s keeping the company afloat are stock sales. There was $135 million in cash on the books at the end of June. Microvision can survive for years at the present burn rate.

If self-driving cars existed, Microvision would have a business. Even if it didn’t make auto lidar, it could at least benefit from patents covering someone else’s.

But Microvision doesn’t have a product business. PicoP isn’t necessary for the current use cases. Cops don’t need its accuracy to chase speeders. Scientists don’t need the portability to measure changes in a forest.

What MVIS stock needs are patient investors who can wait for the market to develop. It has some. Blackrock (NYSE:BLK) holds a bunch of shares.  So, too, big mutual fund companies like Vanguard. That’s why Zack’s recently upgraded Microvision from sell to hold.

The gang at Reddit’s WallStreetBets aren’t long-term investors. They’re looking for a quick pop from other speculators or from a short squeeze. They got some early this year. They might get another.

Investors, on the other hand, need to consider the opportunity cost of waiting, as our Will Ashworth writes. Are you buying a company, or a packet of patents looking for a sale, as Mark Hake asks?

Investing is about measuring a company’s business, and growth prospects, against the market’s value for it.

But why? This market is filled with opportunities, real companies with real products and real prospects. Why put money in a bunch of patents that may or may not pay off?

That’s called speculation. I don’t speculate unless I fully understand something, with a clear time frame in which to measure success. For now, Microvision is what I call an “Oakland” stock. As Gertrude Stein wrote, there’s no there, there.

On the date of publication, Dana Blankenhorn held no positions in companies mentioned in this article. The opinions expressed in this article are those of the writer, subject to the InvestorPlace.com Publishing Guidelines.

Dana Blankenhorn has been a financial and technology journalist since 1978. He is the author of Living With Moore’s Law: Past, Present and Future available at the Amazon Kindle store. Write him at danablankenhorn@gmail.com or tweet him at @danablankenhorn. He writes a Substack newsletter, Facing the Future, which covers technology, markets, and politics.