A Breakout Is Brewing for General Electric Right Now

InvestorPlace - Stock Market News, Stock Advice & Trading Tips GE stock is looking better and better when it comes to the charts. Now the company needs to deliver on...

By Bret Kenwell October 21, 2021
This story originally appeared on InvestorPlace

General Electric (NYSE:GE) has been a pretty quiet stock, particularly since its 1-for-8 reverse stock split. To be honest, I’m surprised management opted to split GE stock in the first place.

With a low stock price, investors and funds could accumulate huge swaths of the shares. While that shouldn’t matter to investors, for some reason it seems to play a role. In any regard, a different split ratio would have also seemed to make more sense.

For instance, a 1-for-6 split would have landed the stock near $80. That would have allowed investors to bid it up to $100, a psychologically important level. Not that GE stock can’t move higher from here. Still, it was an interesting decision.

That said, despite all the share-price shenanigans, the stock is on the cusp of a potential breakout. But let’s look at the chart before diving into the fundamentals. Here’s what you should know about General Electric moving forward. 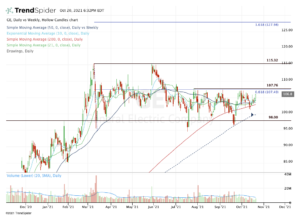 GE stock sprinted higher in late February, topped out in March, then went on a high-volume plunge. All in all, we saw the stock hit $115 then drop down to $95. Interestingly, $95 has now become support while $115 has become resistance.

But over time, the range has gotten even tighter. The $95 to $98 area continues to act as support. So does the 50-week and 200-day moving averages. However, the $107.50 level and the 61.8% retracement have been acting as resistance over the last few months.

So, we have the stock trending higher, but resistance sitting firm near $107.50. That’s putting GE stock in an ascending triangle pattern. That’s defined by an uptrend paired with a static level of resistance.

For now, the momentum sits with the bulls. However, they need to get this stock up and over $107.50.

Let’s give a hand to CEO Larry Culp, who inherited a complete disaster. Not that GE is completely fixed. But it has come a long way in the last 18 months or so. The company was hit by a brutal double whammy.

The economic fallout from the novel coronavirus didn’t do GE stock any favors. But the fallout from the Boeing (NYSE:BA) 737 MAX situation made things even worse. General Electric is an engine supplier for Boeing and GE’s aviation unit is one of its largest businesses.

Now though, despite plenty of skepticism, General Electric’s free cash flow (FCF) situation continues to improve. Last quarter, GE reported solid results across the board. However, the biggest takeaway was (or should have been) that management increased its 2021 outlook for FCF. Management now expects FCF of $3.5 billion to $5 billion, up from a prior range of $2.5 billion to $4.5 billion.

What’s more, three of GE’s four major businesses — Aviation, Healthcare, Renewable Energy and Power — generated a profit in the quarter. The one that didn’t? Renewable Energy, which still saw a 61% year-over-year (YOY) improvement in its losses.

With the next quarterly earnings due on Oct. 26, bulls are now anxious to see two things: if GE can 1) deliver a top- and bottom-line beat and 2) give investors a more optimistic view of the business. Perhaps the latter will be positive talk about momentum in its Aviation unit, or that FCF is coming in at the high end of the range.

In any regard, this kind of positive development could be just the catalyst the stock needs.

So, the chart is set for a breakout. Now GE stock just needs a catalyst. Will management deliver with better-than-expected results? Or come with something else?

We’ll find out by the end of the month. However, the situation here doesn’t hinge on a quarter-by-quarter basis.

The truth is General Electric still has plenty of issues. But it’s also true that the situation continues to improve under Culp’s leadership. Meanwhile, the charts keep setting up in a bullish manner.

The post A Breakout Is Brewing for General Electric Right Now appeared first on InvestorPlace.