By Tezcan Gecgil October 25, 2021
This story originally appeared on InvestorPlace

Shiba Inu (CCC:SHIB-USD) has recently become a top 20 cryptocurrency with a market cap of over $13.5 billion. Though SHIB-USD price has consolidated in recent days, the price of the meme token has surged more than 400% in the past month. 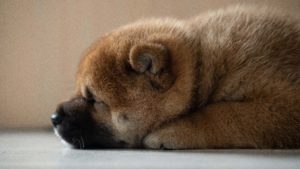 By comparison, other cryptos such as Bitcoin (CCC:BTC-USD), Ethereum (CCC:ETH-USD), and Dogecoin (CCC:DOGE-USD) are up over 45%, 43% and 25% in the last month, respectively.

Following the previous rally in May, Shiba Inu, or the self-proclaimed “Dogecoin killer,” became widely followed. Then, Elon Musk, CEO of Tesla (NASDAQ:TSLA), posted a photo of Floki, his new Shiba Inu puppy, on Twitter (NYSE:TWTR). SHIB-USD skyrocketed 40% within hours after the tweet.

However, the meme coin tumbled again after Musk tweeted that he doesn’t own any SHIB-USD.

It is all exciting news for crypto followers. However, potential SHIB-USD investors should remember that investing in cryptocurrencies means higher volatility levels compared to more conventional asset classes. According to Cryprorank, Shiba Inu is one of the choppiest digital currencies. Understandably, such high risks also mean potentially high returns.

While the demand for cryptocurrencies continues to sure, SHIB-USD could see continued momentum and more bullish sentiment in the near term. Those with risk capital who can handle the daily swings in price could consider buying Shiba Inu, possibly only as a small percentage of their overall portfolio.

The sudden rise in the SHIB coin’s popularity led to a more advanced ecosystem, which now offers two other native tokens, “BONE” and “LEASH” for miner rewards, payments, and voting rights. There is also the new ShibaSwap, a decentralized exchange (DEX).

Since its inception, SHIB-USD has gradually gained acceptance in broader markets. As an ERC-20 token created on the Ethereum blockchain, Shiba Inu is now listed on trading platforms Binance, which is known for Binance Coin (CCC:BNB-USD), Capital, Coinbase Global (NASDAQ:COIN), Israel-based eToro, and several others. In addition to ShibaSwap, it can currently be swapped on other several other decentralized exchanges.

The token has also strengthened its usage as a payment method. Following Shopping.io platform’s integration, NOWPayments just announced it was adding SHIB coin as a payment currency. Moreover, there is an ongoing petition by Shiba Inu community on change.org asking Amazon (NASDAQ:AMZN) to consider accepting Shiba Inu cryptocurrency on Amazon’s platform.

More recently, SHIB expanded its ecosystem by releasing a non-fungible token (NFT) collection, Shiboshis NFTs. Launched on Oct. 14, the NFTs were sold out in just over 35 minutes, as confirmed by Shytoshi Kusama.

These developments show that Shiba Inu is no more a joke in the cryptocurrency ecosystem. However, it is still hard to say whether it can offer reliable gains for long-term investors.

The Bottom Line on Shiba Inu

In its early days, Shiba Inu’s creator sent half of the token supply to Ethereum co-founder Vitalik Buterin for safekeeping. In mid-May, Buterin donated over 50 trillion Shiba Inu coins to India’s Covid Crypto Relief Fund. The donation, which was worth around $1 billion at that time, made up more than 5% of the total Shiba Inu coins in circulation and triggered a price crash by 50%.

This incident alone is self-explanatory about meme coins being speculative investment tools. The fact that it has no intrinsic value leads a crypto such as SHIB-USD to become open to wild swings. FOMO (fear of missing out) or FUD (fear, uncertainty, and doubt) might easily lead choppiness as influencers or whales act in self-interest.

in 2021, Shiba Inu Token became a remarkable digital asset for early investors. Its Twitter account has 1.2 million followers and there is an active community on Reddit. Thus with good luck on their side, risk-takers could see further profits in Shiba Inu.

However, despite its ever-growing popularity and massive short-term gains, SHIB-USD is by no means a foolproof investment. Let the buyer beware.

Tezcan Gecgil, Ph.D., has worked in investment management for over two decades in the U.S. and U.K. In addition to formal higher education in the field, she has also completed all three levels of the Chartered Market Technician (CMT) examination. Her passion is for options trading based on technical analysis of fundamentally strong companies. She especially enjoys setting up weekly covered calls for income generation.