What Is Shiba Inu, And Should You Buy It?

InvestorPlace - Stock Market News, Stock Advice & Trading Tips If you take a pass on Shiba Inu, don't feel like you're missing out on the next Bitcoin. That said,...

By Bret Kenwell October 25, 2021
This story originally appeared on InvestorPlace

The cryptocurrency craze is back, isn’t it? Bitcoin (CCC:BTC-USD) is hitting an all-time high and Ethereum (CCC:ETH-USD) doesn’t appear to be far behind. Will that be enough to send Shiba Inu (CCC:SHIB-USD) to new highs as well?

To be honest, the charts are looking pretty good for this one. Money has been pouring into the group and it hasn’t been a bad thing for Shiba Inu.

Shiba Inu saw some minor pops over the past few months, but it really came to life in October. On Oct. 4, Shiba rallied more than 50%, kickstarting a massive move to the upside. It came amid an eight-day rally where it gained over 298%.

Since then, the new cryptocurrency has been consolidating its gains and drumming up plenty of interest among investors. Let’s take a closer look.

What is Shiba Inu?

Shiba Inu was created as a direct rival to Dogecoin (CCC:DOGE-USD), launching in August 2020. While Dogecoin has a low price point at 26 cents, Shiba Inu is considerably smaller from price-per-coin perspective, coming in at just 0.000039 cents.

And to be clear, Shiba is a competitor against Dogecoin, which began as a joke and ultimately kicked off the whole “meme coin” thing. So if you’re a serious investor and this seems too childish for you, there’s a good reason as to why.

According to Shiba’s “mysterious founder” Ryoshi, SHIB has “the ability to outpace the value of Dogecoin, exponentially, without ever crossing the $0.01 mark.” 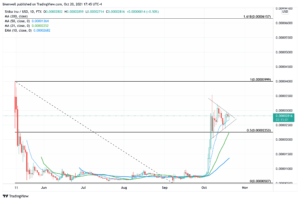 When it comes to trading rather than investing, I am much more in tune with the technicals. In the case of SHIB, that’s a good thing, because the fundamentals don’t have a situation that are typically in my wheelhouse of investments.

From a technical perspective though, this one actually looks like it could have some potential.

Shiba Inu exploded higher earlier this month, rallying from ~0.000007 cents up to the 0.000024 to as high as 0.000046 area, (moving from five zeros after the decimal to four). I know, it’s an annoying price to work with. However, the idea is that the microscopic price will convince buyers to scoop up swaths of the coin.

In any regard, SHIB is giving traders a bull pennant formation, marked by a series of higher lows and lower highs following a strong run to the upside. Looking for direction now, bulls are hoping for an upside breakout.

If Shiba Inu can get over 0.00004 cents and stay there, who knows where this one could go. One tweet from Tesla (NASDAQ:TSLA) CEO Elon Musk could change everything — for better or for worse.

Anyone buying this cryptocurrency has to embrace it as a volatile holding. However, if we see a move below the 50% retracement, more downside could be on the way. To lose this retracement would equate to a fall of about 20% from current levels.

The technicals actually look OK with this one, but it’s far from being a sure thing.

Investors who want to ignore Shiba Inu shouldn’t feel ashamed for doing so. However, those that want to dabble in this cryptocurrency could always take a minor “lotto” stake on it.

In other words, a position that, if Shiba Inu were to disappear overnight, it would do nothing more than create a negligible loss in one’s portfolio. But if it explodes higher, the investor can ride some of those gains. Personally, that’s how I would trade SHIB, if I were to do so.

The post What Is Shiba Inu, And Should You Buy It? appeared first on InvestorPlace.