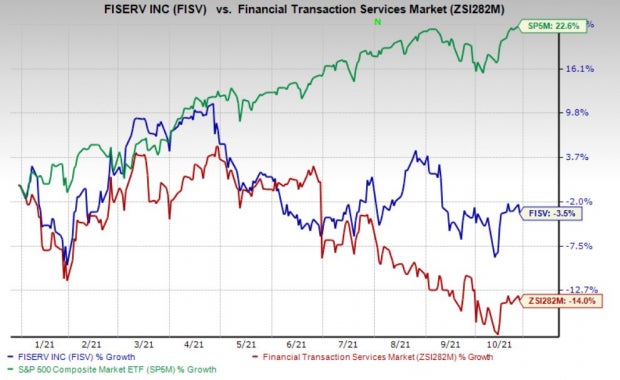 Let’s check out the numbers in detail:

Revenues at the Payments and Network segment increased 6.1% year over year to $1.47 billion. Adjusted revenues of $1.48 billion grew 5.9% year over year.

Revenues at the Financial Technology segment increased 4.7% year over year to $761 million.

Operating income at the Financial Technology segment totaled $275 million, up 3.8% year over year. Operating margin fell to 36% from 36.4% in the year-ago quarter.

The company generated $678 million of net cash from operating activities in the reported quarter. Free cash flow was $572 million. Capital expenditures were $320 million.

The company repurchased 3.2 million shares for $365 million in the reported quarter.

Fiserv has raised the lower end of its outlook for 2021. Adjusted earnings per share are now anticipated in the range of $5.55 to $5.60 compared with the prior guidance of $5.50 and $5.60. The Zacks Consensus Estimate of $5.56 lies within the updated guidance.

The company now expects internal revenue growth of 11% compared with the prior guidance of 10% to 12%.

Performance of Other Business Services Companies

Equifax’s EFX third-quarter 2021 adjusted earnings of $1.85 per share beat the Zacks Consensus Estimate by 7.6% but declined on a year-over-year basis. Revenues of $1.22 billion outpaced the consensus estimate by 3.6% and improved 14.5% year over year on a reported basis and 14% on a local-currency basis.

IQVIA’s IQV third-quarter 2021 adjusted earnings per share of $2.17 beat the consensus mark by 1.9% and improved 33.1% on a year-over-year basis. Total revenues of $3.39 billion outpaced the consensus estimate by 1% and increased 21.7% year over year on a reported basis and 21.1% on constant-currency basis.